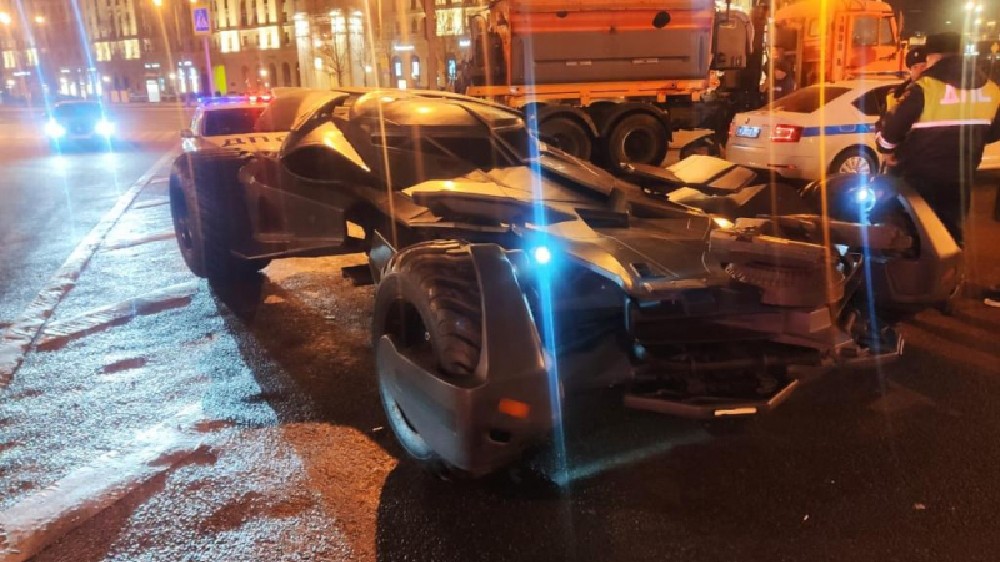 Ministry of the Interior

After decades of fighting both sides of the law, Batman may have finally met his match. No, it wasn’t the Joker or Catwoman who bested the Dark Knight. Instead, it was the Moscow police.

A replica of the Batmobile featured in the 2016 movies Batman v Superman: Dawn of Justice and Suicide Squad was impounded on the streets of the Russian capital last weekend, reports state-operated TV network RT. The vehicle was towed, the network said, after authorities determined it lacked proper registration and didn’t meet road safety regulations.

Batman’s ostentatious ride reportedly caught the attention of traffic officers last Saturday after it was observed parked on a major Moscow street without a license plate. According to RT, police found that the car had never been registered and didn’t have clearance to operate on public roads. Making matters worse, a statement from Moscow’s branch of the Ministry of the Interior said that, after the vehicle was measured with a “special technical measuring instruments,” its dimensions proved to be in “excess of permissible norms.”

With the replica car’s 32-year-old owner nowhere to be found, traffic police had to call in a special towing service to remove the 13-foot-wide Batmobile, according to the report. Video of the car being towed shows that the driver took special care with the Batmobile, wrapping it in plastic to make sure it wasn’t scratched. After all, one wouldn’t want to run further afoul of The Batman.

The illegal Batmobile  Ministry of the Interior

The Ministry of the Interior’s statement goes on to say that the Batmobile’s owner was hit with three citations. The owner will also have to shell out $780 to the tow truck company that removed the vehicle, as well as $35 for every day it is held at the impound lot. Of course, that’s chump change to Batman’s alter ego, billionaire playboy Bruce Wayne.

As over-the-top as this Batmobile may look, it’s futuristic, military aesthetic isn’t as jaw-dropping as its $850,000 (about 55 million rubles) price tag. That’s how much the vehicle was reportedly listed for when it was advertised on Russian car sale website last year. It’s unclear how much the vehicle ultimately sold for. But can you really put a price on justice?

See the replica getting towed below: