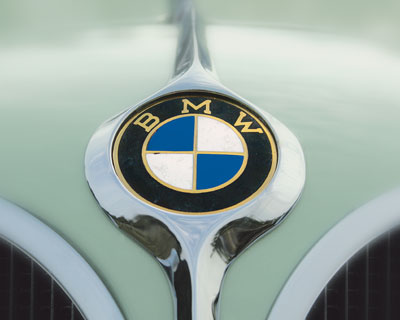 No sound of wheels or hoof-beat breaks

The silence of the summer day,

As by the loveliest of all lakes

I while the idle hours away.

Had Henry Wadsworth Longfellow strolled along the Lago di Como shoreline this past April, he may have revised his tetrameter to read: “The sounds of wheels and squeaky brakes / From a hoofless carriage parade, / Models of legendary makes / Resplendent in the cypress shade.” Or something along those lines.

Each spring in the northern Italian town of Cernobbio, just a half-hour drive from Milan, the manicured lawns that stretch from the hotel Villa d’Este to Como’s cool waters become a carpeted green stage for the Concorso d’Eleganza Villa d’Este. The players are classic cars and design prototypes that have been invited to participate. The first such production was held here in 1929–a year after BMW built its first car–and with assistance from the Bavarian automaker, the Concorso was revived in 1999 as a tribute to automotive design from the past, present, and future.

Unlike at most other concours events, the best-preserved specimens do not always receive the blue ribbons. Instead, the judges consider the virtues of each model’s design. This is a beauty pageant in which age lines, wrinkles, and blemishes do not count against the contestants, so no amount of nipping, tucking, Botox, and Bondo can offer an advantage. “It’s about relevance, influence, originality, and presentation,” says Winston Goodfellow, a three-time judge at Villa d’Este. “Restoration plays a part, as does historical significance, but design is crucial. For example, this year, the second-place car’s restoration was nowhere near as nice as the car that won, but we were deadlocked for more than a day before we finally decided on the winner.”

This year’s invitees numbered approximately 50, not including the classic BMWs that were on hand neither to compete nor to serve as decoration; they were here to be driven.

David E. Davis Jr., the former editor in chief of Car and Driver, often is credited with making BMW a household name when, in the magazine’s April 1968 issue, he described the BMW 2002 as the “best way to get somewhere sitting down.” In fact, after the publication of that review, Max Hoffman, BMW’s first Stateside importer, offered Davis a free car, which he politely declined. Following this year’s Concorso d’Eleganza, I sat down with Davis in a series of BMWs as we made our way from Cernobbio to Verona.

before we set off in a two-tone green-on-green 1936 BMW 319/1 that a day earlier had been parked amid the flora in a Villa d’Este garden, proper headgear was in order. “Try this on,” Davis offered, handing me a fitted Detroit Tigers baseball cap. It didn’t fit. “You’re probably not going to like this any better,” he said as he produced a white cotton driving cap, complete with chin strap. Wearing it, I resembled Woody Allen portraying a sperm cell in Everything You Always Wanted to Know about Sex but Were Afraid to Ask. But who was I to argue with this legend? He had my health in mind, and for that I was grateful. Besides, roadsters can be chilly conveyances on Alpine mornings. Then he handed me a silk paisley scarf, and the photographer who was taking pictures of the cars we would drive could not resist snickering.

We exited the parking lot of the Palace Hotel in Como and headed north along the lake in the direction of Bellagio. The 319’s baritone exhaust note reverberated off the sheer rock walls that border Cernobbio’s mountain roads. Mark Twain described this scenery in The Innocents Abroad, and his depiction holds true today: “We passed through a range of wild, picturesque hills, steep, wooded, cone-shaped, with rugged crags projecting here and there, and with dwellings and ruinous castles perched away up toward the drifting clouds. We lunched at the curious old town of Como, at the foot of the lake. . . .”

However, we were on our way out of town, having already breakfasted in Como. Lunch would not be until just before we reached Zogno, 103 kilometers away.

The BMW 319/1 is not a bad starting point if you want to experience firsthand the history of German autos. For one thing, it is an open-top roadster, and the best mode for viewing the steep, picturesque hills as you drive through them. On this sunny Lombardy day, the 319 shone like new. Visually identical to the 315, the 319 sports a 1.9-liter engine that develops a surprisingly motivational 55 hp at 4,000 rpm, or 15 hp more than its predecessor. The 319 moved with an easy grace, and its inline 6-cylinder engine made a validating howl of an exhaust note. The car could have achieved a top speed of 84 mph, but on these roads we instead throttled up to 60 and settled into a trot.

An antique roadster may take longer than a Honda Civic hybrid to attain cruising speed, but this allows more time to savor a row through the 4-speed gearbox. Yes, the steering wheel feels heavy by contemporary standards, and maybe the clutch is a bit stiff, but most septuagenarians suffer worse for wear. The two-year model run of the 319 makes it challenging to find one, and if you do, its auction price might exceed the cost of a modern Ferrari with 10 times as much power.

In the sequence of our drive–and in history–the 319 preceded the 328. The first time the world laid eyes on the 328 was on July 14, 1936, at the Eifelrennen race on the Nürburgring. Ernst Henne, a motorcycle racing legend—turned—racecar driver, won the race in the BMW prototype. Victories at the 24 Hours of Le Mans, the Mille Miglia, and other events would follow.

After we convoyed with the other drivers and their BMWs up the eastern shore of Lago di Como, through Bellagio, and down the western shore of Lago di Lecco, it was time to switch rides. The 328 represented an astonishing leap forward from the 319. Even by today’s standards, the 328 was easy to aim through the turns we encountered up and down northern Italy’s hairpin-packed mountain passes.

Until 1936, sports cars were a rough lot. They were poor-handling, hard-riding, minimalist machines. Then BMW–which until the early part of the ’30s had built only motorcycles and airplane engines–reinvented the sports car with the 328 roadster. The 328’s aerodynamic frame and integrated headlights slipped through the wind, while its independent front suspension smoothed the bumps, even when the car, powered by an 80 hp engine, was traveling at its top speed of 94 mph. A pair of leather straps held the hood in place, as if to suggest that without them, the inline 6-cylinder, three-carburetor engine would break from its moorings.

Road construction and the turns we missed while carrying on a conversation led us to take the most circuitous route imaginable. Soon we found ourselves heading the wrong way past the factory that bottles San Pellegrino–another sparkling classic. After turning around, we eventually stopped for espressos somewhere between the towns of Bianzano and Endine and watched as dozens of Ducati riders buzzed past. The afternoon sun was beginning its long descent, and it was once again time to swap cars. This time, we fast-forwarded into the postwar years–it was not until well after World War II that the company again began building open-topped sports cars–and settled into a white 1957 BMW 507. Based on the chassis of the BMW 502 sedan, the 507 had a 150 hp engine that produced a top speed of nearly 130 mph.

Elvis once owned a 507, but even that celebrity endorsement could not significantly increase the volume of exports to the United States, which was the prime target of the sports car. BMW built only 251 examples of the 507 during the vehicle’s three-year production run from 1956 through 1958, with sales lagging partly because of fierce competition from that oth­er German manufacturer, Mercedes-Benz, whose Gull­wing coupe and SL roadster already had stolen America’s collective heart.

Having recently driven a factory-restored 1957 Mercedes SL Roadster, the quintessential performance convertible, I was primed for a comparison, and can say with a fair degree of authority that the Bavarian Bimmer is every bit as fun to drive as its Stuttgart counterpart.

BMW’s next roadster did not debut until nearly 30 years after the 507’s production run ended. Funky met functional in the Z1, a car whose claim to fame was its vertically retractable doors, which did little to aid ingress or egress. The Z3, Z4, and Z8 came later in time and on our ride through northern Italy.

After two days of driving several million dollars’ worth of BMWs, I found myself questioning the wisdom of the classic-car hobby. Why bother with an unreliable antique when, for the same price or considerably less, you could acquire a modern überroadster with 500 hp and an extended warranty?

Davis answered the question with what he calls his theory of cash therapy. “No matter how good things are,” he explained, “you’ll feel even better if you go out and spend a bunch of money on something you don’t need.” Something that ultimately elicits more murmurs of delight than woe.