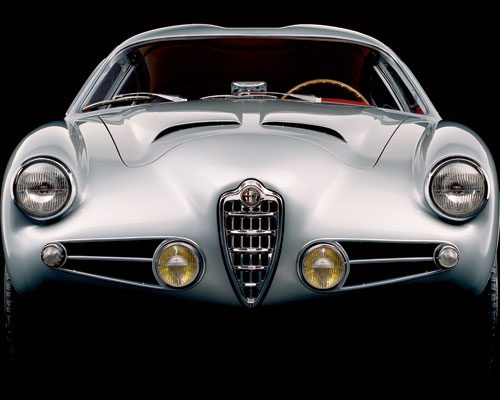 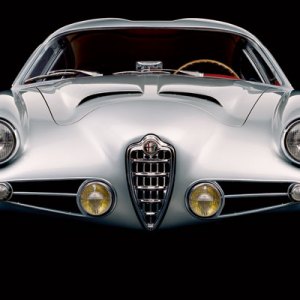 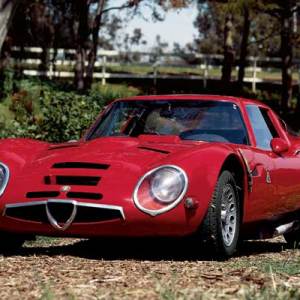 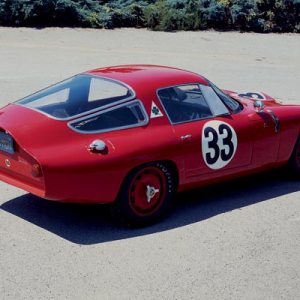 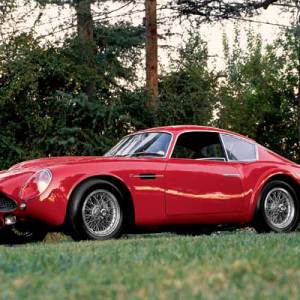 Exclusivity just isn’t what it used to be. If you own a Ferrari Enzo, for example, you know that 398 other drivers are enjoying the same experience. Stylish and fast your car may be, but unique it is not. Perhaps equally disheartening, the Enzo’s appearance, like that of most exotic cars of the 21st century, displays little of what might be 1956 called Italian character. Today’s automotive stylists—who hail from all over the world, learn their skills at a select group of colleges, and move regularly from one manufacturer to the next—have removed national influence from the creative process. The days of Italian design (or, for that matter, British, Japanese, German, American, or French design) are essentially over.

Not long ago, before modern production processes, product liability problems, safety regulations, and high labor costs made them unfeasible, bespoke bodies were an option, albeit an expensive one, for standard automobiles. Numerous coachbuilders catered to manufacturers and well-heeled individuals, crafting cars that were tailored to specific tastes and purposes. Nowhere else did the art of custom coachbuilding flourish as it did in Italy. For decades, Italian carrozzeria built one-off creations that influenced the designs of mass-produced sports cars and even family sedans. The carrozzeria’s cars were favorites of royalty, movie stars, and other wealthy patrons, and among today’s collectors of four-wheeled art, they remain prized possessions.

Some bespoke bodywork transformations represented silk-purse-from-sow’s-ear efforts; others elevated classic designs to a higher plane. Among the latter class were Italian coachbuilder Zagato’s takes on the Aston Martin DB4, the Fiat 600, and the Alfa Romeo Giulietta. Each of these machines was well suited to the purposes for which it was originally designed, and examples of the cars are still cherished by collectors today. All three, however, were one step away from greatness—until, that is, they benefited from bodywork by Zagato.

The 1960 Aston Martin Zagato, the 1956–1959 Fiat Abarth Zagatos (née Fiat 600 TS), and the Alfa Romeo TZ1 and TZ2 from 1963 through 1965 were all competitive racing cars in their time. The cars also represented the ultimate expressions of Italian artistry from this golden age of automotive design.

Since its founding in 1919, Zagato has clothed a long line of cars—from other Alfas, Astons, and Fiats to Ferraris, Maseratis, Porsches, Lancias, and Lamborghinis—in eye-catching light-alloy bodies. No special knowledge or background in design is necessary to appreciate the carrozzeria’s work, nor is a thorough grounding in automotive history. Res ipsa loquitur, as the lawyers say: It speaks for itself. The Aston, considered the Milanese coachbuilder’s most beautiful effort—some even say it is the most beautiful grand touring car ever—looks wonderful from any angle. Its contours demand to be felt as well as seen, for only with the hands can the subtlety of its curvatures be discerned. The blending of the traditional Aston grille shape with equally traditional Italian lines is masterful; if any car can look brutish and delicate all at once, combining the power of a weight lifter with the grace of a ballerina, the Aston does.

Perhaps best of all, the Aston displays a trait common to Zagato’s best designs: The body shape is pure and purposeful, without any excess ornamentation or design cues added for visual effect alone. There is no shock here, only delight.

Most noteworthy, the Aston design is efficient. The majority of Zagato bodies produced during the firm’s finest years (spanning roughly the four decades from 1925 to 1965) were intended for racing. There is no advantage in applying the superfluous and gaudy to a car meant to be as light and aerodynamic as possible. Even beauty is a bonus, but for members of the Italian carrozzeria trade, a band of men whose innate metalworking abilities recalled the painting and sculptural skills of their forefathers, making racecars look good was part of the job.

Of course, not all Zagato bodies were memorable. One or two could have been considered downright unattractive, and others were no better than dull. Nor was Zagato excessively innovative; the firm was no more immune to appropriating interesting shapes and elements from other cars than any of its competitors. Yet the best of Zagato’s work can be classified with the greatest automotive designs of all time.

Although some Zagato designs, such as the roly-poly 1965 Lancia Fulvia Sport (of which approximately 7,000 were built), were reproduced in quantity, the company was primarily a boutique builder. Zagato produced only 19 of its 1960 Astons (all survive), slightly more than 100 of the TZ1 and TZ2 Alfas, and, by most estimates, more than 400 Fiat Abarths. Other models are even rarer: Zagato built a mere 12 bodies on Ferrari chassis and only two cars using Jaguar hardware. The firm’s limited production was in stark contrast to other well-known Italian coachbuilders of the era. Pininfarina, in addition to becoming Ferrari’s prime supplier of bodies, did (and continues to do) contract design and low-volume manufacturing work for car companies around the world. Ghia, Touring, Bertone, and Italdesign were equally prolific.

From the very beginning, however, Zagato’s focus was on one-off and limited-series bodies. Ugo Zagato left his job with an aircraft manufacturer in 1919, setting out to “construct and repair automobile bodies” in his one-man shop in Modena. His earliest bodies were well made but somewhat ordinary in form. This changed when a politically connected friend, Aldo Finzi, introduced Zagato to the management of Alfa Romeo. The meeting resulted in an arrangement by which Zagato received bare Alfa chassis for his firm’s bodies. The Alfa Zagatos, particularly the 6C 1750s and 8C 2300s, were so attractive and, thanks to their lightweight construction, so effective as racing cars that the association between the two firms lasted for the next half century. The relationship also brought Zagato into contact with Enzo Ferrari, then working with Alfa, and a lifelong friendship ensued.

Zagato’s connection with Alfa was not exclusive. Various Fiat chassis received bodywork ranging from rather ordinary limousine designs to streamlined racers, while Isotta Fraschini trucks sported unusually handsome and aerodynamic cabs from Zagato. The latter, plus other trucks built for the Italian army, may not have been as dear to Zagato’s heart as his little Fiat 500 Topolino-based racers, but they did help keep his company’s doors open during times of financial crisis, which plagued the firm repeatedly over the years.

After closing during World War II, Zagato resumed operations in the mid-1940s, concentrating primarily on racing cars. Ugo’s son Elio began working with the firm at the end of the decade; his other son, Gianni, soon joined as well. (The company is now run by Ugo’s grandson Andrea.) Most of the early postwar work was for Fiat, though Zagato built the bodies for the never-produced Isotta Fraschini Monterosa sedan project and the Alfa Romeo Type 159 Grand Prix racers.

In 1947, Zagato produced its first innovation. Called the Panoramica concept, it employed a raised roofline and glass areas that curved up into the roof. The execution was, in many cases, awkward (the roof shapes did not always harmonize with the bodies they were attached to), but drivers appreciated the increased visibility. Still, Zagato abandoned the Panoramica design after mounting examples on Fiat, Maserati, and Ferrari chassis.

Zagato spawned several masterpieces in the early 1950s. The first was a series of SSZ (Super Sprint Zagato) coupes built on the Alfa Romeo 1900 chassis. The Alfa-supplied components presented a serious design challenge: The 1900’s 4-cylinder twincam powerplant was tall and sat high in the frame. Yet Zagato managed to produce a lithe and elegant body that displayed no signs of compromise and was, because of its light weight, better suited to motorsports than Alfa’s in-house designs.

One Alfa 1900 SSZ, which was commissioned by an exceptionally tall customer, debuted Zagato’s most familiar stylistic element: the double-bubble roof treatment. The gently curving domes above the driver’s and passenger’s seats were added to increase headroom, and the flattened section between the bubbles improved aerodynamics. The added shaping also strengthened the roof panel and proved to be a distinctive and attractive feature that would appear on several future designs.

Zagato followed the Alfa 1900 SSZ with an even more modern design built on the chassis and running gear of the Fiat 8V sports coupe. These Alfas and Fiats—in addition to bodies produced for Lancia Appias, Maserati A6Gs, and Ferrari 250s—remain among the most collectible and beautiful of Zagatos.

Ugo Zagato’s business continued to grow during the 1950s and into the 1960s. Racecar builder Carlo Abarth ordered large quantities of Zagato bodies for the small rear-engine Fiat platform, which he fitted with his own modifications to engines, brakes, and suspension. Later, Abarth brought Porsche to Zagato when the German company needed a light racing coupe. The product of this pairing was the 1600 Carrera Abarth, of which Zagato built only 21.

An Alfa Giulietta that Zagato produced for a private customer attracted orders for more, and in 1960 Alfa’s management made the rounded coupe, called the SZ, an official member of its model lineup. The SZ was followed by the more radical TZ1 and TZ2 competition cars, which mated low, sleek Zagato bodies with tubular frames for maximum lightness. Lancia came calling as well, offering several of its models for handsome Zagato coachwork.

Just as Alfa SZ production was ramping up, Aston Martin approached Zagato. The British firm was working with Touring, which supplied bodies for the DB4 series, but it needed a lighter, wind-cheating car to challenge the Ferrari 250GTs in competition. The result was the glorious Aston Martin Zagato. Although the Aston was not fast enough to wrest race victories away from the Ferraris, and demand for the big coupes was initially tepid, time has erased the relevance of those track defeats. Today, with its wonderful blend of exclusivity and beauty, an Aston Zagato commands a seven-figure price on the rare occasion when one changes hands.

The Aston project marked the debut of Zagato’s first official designer, Ercole Spada. Before Spada’s arrival, the firm’s metalworkers executed the designs using rough sketches and simple front-, rear-, and side-view drawings as their guides. Spada brought a more methodical approach to the design process. After finishing the Aston, he reworked the Alfa SV (shortening its tail for aerodynamic purposes), created the TZs, and devised a host of other delightful Zagato designs before ending his tenure in 1969 with the tiny, appealing Alfa Junior Z coupe.

In more recent decades, Zagato has fallen on lean times. There have been brief flashes of the company’s former greatness: In the 1980s the coachbuilder had a run of 50 Aston Martin V8 Zagato coupes that were sold before they were completed (as were the Volante convertibles that followed), and the firm’s latest project with Aston Martin, a 2003 DB7Z, rekindled some of the old magic. But these were not enough; other speculative projects have drawn little attention or, like the Raptor, a redesign of the Lamborghini Diablo, were not considered for production.

As demand for its traditional services has dwindled, Zagato has diversified, taking on more industrial design projects. But surviving examples of Zagato’s automotive work command astronomical prices in today’s market. Knowledgeable collectors seek them out for the diversity of hardware on which they are based and, of course, the beauty of their Italian bodies—a purity that has become increasingly difficult to find.