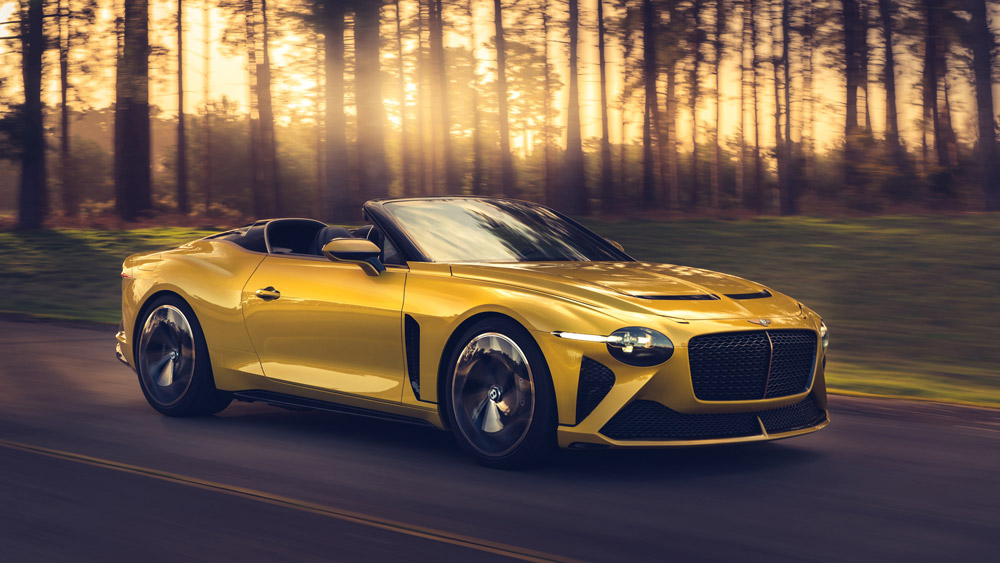 The 2020 Geneva International Motor Show would seem like the ideal venue for the debut of the new Bentley Bacalar, the brand’s first coachbuilt effort in decades. But, as fate would have it, a rogue pathogen disrupted the proceedings.

Pushing formalities aside, a virtual debut of the customized special might be an even better way to regard the Bacalar, which we’re guessing will look as striking in the flesh as it does in slick press images.

Named after Mexico’s Laguna Bacalar in the Yucatan Peninsula and drawing from the EXP 100 GT concept, the new open-air two-seater shares zero body panels with a standard issue Continental GT Convertible, save the door handle (which houses the vehicle’s keyless entry hardware). Its outwardly visible bits, which include carbon fiber, aluminum and 3-D-printed construction, presents dramatically chiseled edges and inlets, a far bolder treatment than the predominantly elegant off-the-shelf Continental. But it’s not just about shapes.

Any decent coachbuilt story should be worth its weight in oddball materials, and this al fresco Bentley offers plenty, starting with 5,000-year-old Riverwood veneers sourced from the ancient Fenlands of East Anglia. (Fenlands, in case you’re wondering, are the coastal plains of eastern England—don’t worry, we had to look it up, too.) The dark-tinted wood, which survived the ages by being preserved in peat bogs, is mirror-matched and separated into an open-pore top layer and a high-gloss bottom.

Adding to the interior exotica are anodized titanium and metallic dark bronze finishes, beluga leather accented with natural British wool and no fewer than 148,199 stitches on each seat representing the Bacalar’s definitively futuristic logo. A somewhat dubious sustainability theme extends into the metallic paint, which contains ash from rice husks and uses what Bentley calls a synthetically manufactured silicon dioxide platelet coated with iron oxide. “Trust us,” a disembodied voice seems to whisper, “your 12-cylinder super roadster is green.”

At least the Bacalar is focused on its mission to stray from the mainstream. So committed is this specimen to its open-air configuration, it has no roof to speak of; call it a roofless barchetta, if you’re fancy. Bring sunscreen—oh, and maybe a watertight alibi for the inevitable constabulary, while you’re at it: the 6.0-liter W12 packs extra punch over a commoner’s Conti, bringing the grand total to 650 velvety hp.

Bentley’s Mulliner division, once a subsidiary of Rolls-Royce when the two nameplates shared a roof, is using the Bacalar to further its three-part mission to bring Bentley back into coachbuilding. The Mulliner Classic branch is responsible for reissue of a dozen 1929 Bentley Blowers, the Collections division brings more luxurious versions of core offerings (like the Continental GT Mulliner Convertible), and the Bacalar is a part of the Coachbuilt portfolio, in which a lucky few work with artisans to create their own exterior treatments, design themes and rare paint options.

“The question always is, what is necessity, and what is luxury?” says Stefan Sielaff, Bentley’s design director. “Of course, as a human, you want a bit more. It’s more than only eating, drinking and producing children,” he posits.

It’s a contemplation that cuts to the core of Bacalar. Only 12 examples will be produced and made available to special clients at a starting price of nearly $2 million. And yes, every last one is spoken for. Go figure that this already elusive ride is enjoying an inscrutably elusive viral debut.