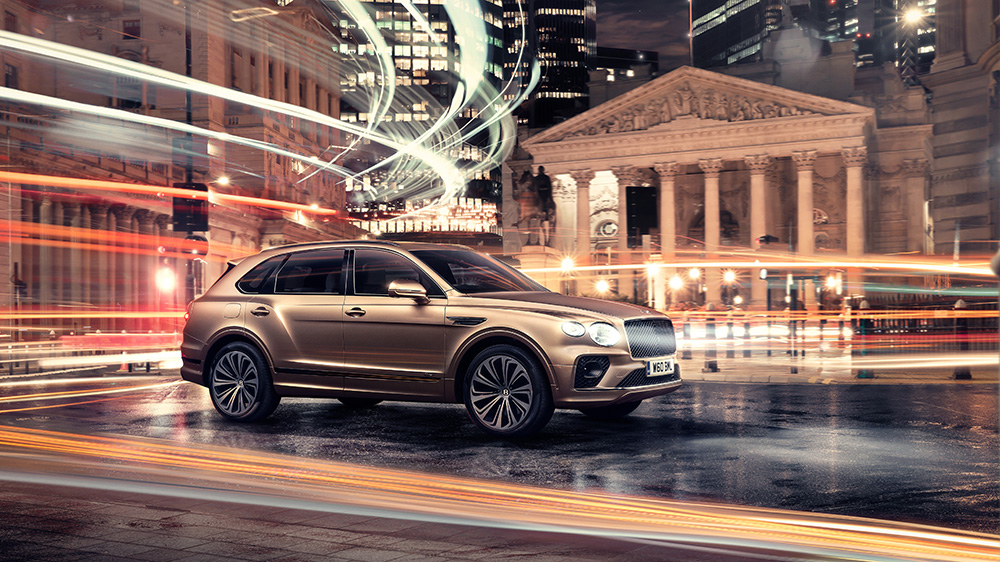 Bentley posted a record sales year in 2020, but it has no plans to slow down in 2021—at least if the marque’s newest Bentayga SUV is anything to go by.

While the newest version of Bentayga Hybrid is not radically different from its predecessor, it is more refined in nearly every area. From a bolder design to state-of-the-art tech, the British automaker appears to have have taken its already-popular electrified SUV and made it even better.

Like its internal combustion siblings, the new Bentayga Hybrid will enter 2021 with a new design indebted to one of Bentley’s other top sellers, the Continental GT. The SUV sports a much sleeker shape than before, especially in the rear. It also features a larger and more upright front grille, cut-crystal headlights and new wheels. The big difference between the electrified Bentayga and the model’s other variants are an electric charge point on left rear fender, a different exhaust and, of course, Hybrid badging.

The SUV’s interior has also been given a thorough makeover. At the center of the changes, and the cabin, is a new 10.9-inch touchscreen infotainment system that features Apple Air Play and Android Auto. There’s also a wireless charger at the base of the center stack along with six USB ports so that you can charge each and every single one of your devices while driving. Other new fixes include a digital instrument cluster, an improved head-up display and revised steering wheel, door trim and seat designs. In the back of the five-seater you’ll find ventilated seats and nearly four inches of additional knee room, something taller passengers are sure to appreciate.

Underneath the hood, the hybrid is still powered by a 3.0-liter twin-scroll turbocharged V-6 sourced from Audi and an electric motor, according to Road and Track. Mated to an 8-speed automatic transmission, the hybrid powertrain delivers 449 horsepower and 516 ft lbs of torque (127 hp and 258 ft lbs of twist come from the electric motor). Bentley says that the battery pack can run 31 miles solely on electricity and travel 536 miles on a single tank of gas. Additionally, the car will have three driving modes: EV Drive, which is purely electric and meant for city driving; Hybrid, which makes use of both motors and is meant for longer journeys, and Hold, which sounds like something of a low-power mode that reserves battery charge for later.

Bentley has yet to announce pricing info for the Bentayga Hybrid, but we’d expect it to be in line with last year’s $160,000 starting point. While you’ll have to wait for an exact sticker price, the marque expects deliveries of the new SUV to start this spring.