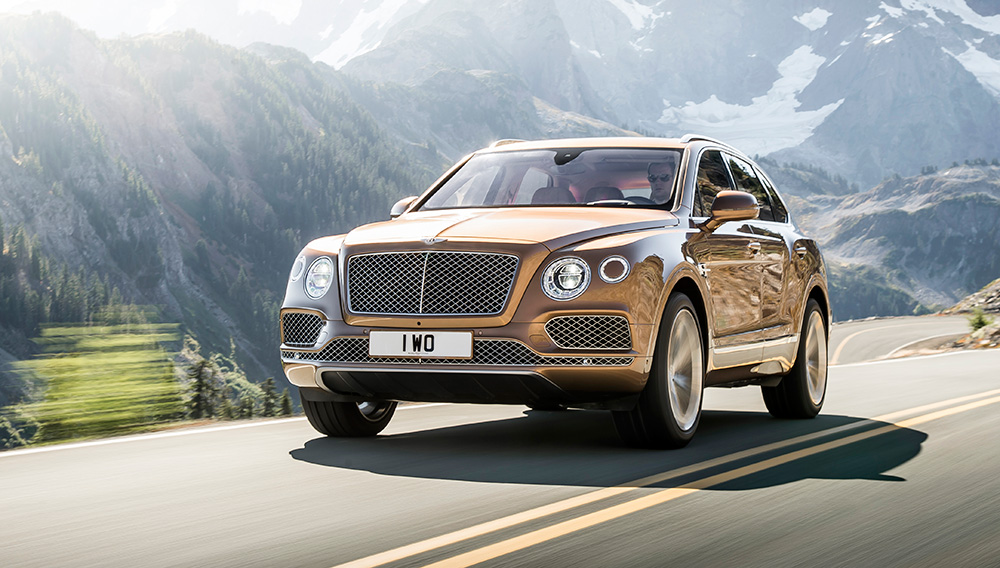 The Bentley Bentayga SUV, announced yesterday by the British marque, will be the fastest and most powerful SUV in the world, according to Bentley. Driving the sport utility over any competition will be its 600 hp, twin-turbocharged, 6-liter W-12 engine. Bentley says the 12-cylinder powerhouse will deliver 663 ft lbs of torque, blast the Bentayga from zero to 60 mph in 4 seconds, and allow it to reach a top speed of 187 mph. And direct and indirect fuel injection will allow for increased performance and decreased emissions.

But unprecedented power requires cutting-edge control, which Bentley delivers with its Drive Dynamics Mode and optional Responsive Off-Road Setting. The combination provides eight driving-mode selections—more than any vehicle to date. Another benchmark is Bentley’s Dynamic Ride, billed as the world’s first electric active-roll control. This means the system automatically compensates for lateral roll potential with additional downforce when cornering. An 8-speed automatic gearbox also enables the car’s torque converter to open after fifth gear (when the throttle is released), idling the engine until the gas is once again applied, resulting in about a 12-percent increase in efficiency over previous power trains.

The Bentley Bentayga is also a tour de force in refinement. Its 15-piece interior surface area is dressed in hand-selected wood veneers, metal, and leather. The front seats are fit with 22-way adjustability and a six-program massage system. Dialing out the dash are a heads-up display and infra-red, night-vision technology for driver safety, and a predictive navigation system that takes into account any change in terrain or speed limit, and responds accordingly. For passengers looking to pass the time, an 8-inch touchscreen entertainment system in the front contains a 60-gigabyte hard drive and can be operated in 30 languages. In the back, there is a removable 10.2-inch tablet with an Android-based operating system. Those content to take in the sights benefit from panoramic glass that encompasses about 60 percent of the roof.

Also available with Bentley’s Mulliner trim treatment, custom packages include options for a refrigerator, Linley china, and crystal glasses, and a 1,950-watt Naim sound system with 18 speakers. For those who put a premium on punctuality, a solid-gold Mulliner Tourbillon by Breitling (with diamond indices) is available as a dashboard detail.

The Bentley Bentayga will be available in a four- or five-seat configuration, with a seven-seat edition in the works, along with diesel and hybrid versions of the SUV. Though Bentley has not yet officially announced pricing, reports indicate that it will start at more than $200,000. The Bentley Bentayga will make its official debut at the Frankfurt auto show from September 15 through 27. It will go on sale in early 2016. (bentleymotors.com)