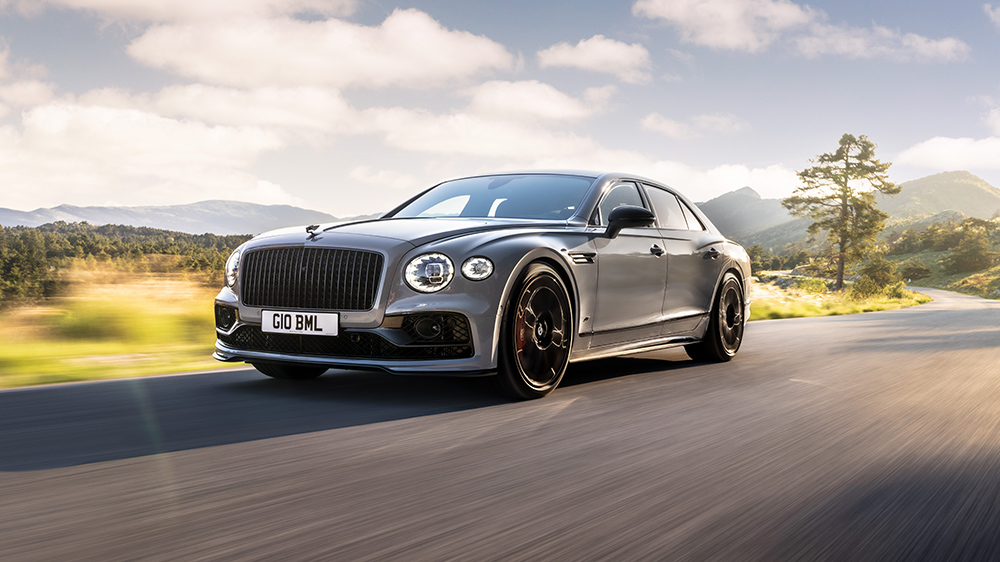 The new Bentley Flying Spur S is meant for drivers—not for those who like to be driven.

The British luxury marque unveiled a new performance-focused variant of its elegant sedan on Monday. The brand’s latest S model gives the four-door a sporty makeover and sees it equipped with a number of upgrades that make it the most driver-centric version yet.

Bentley’s saloon is about as stately as cars come. The new Flying Spur S looks athletic and fast, though. The biggest difference between it and the rest of the range is the absence of chrome. Almost everything that used to shine on the sedan is now covered in gloss black, including the grille and window trim, while the lighting in the front and back been given a dark tint. There are also two new wheel styles to choose from: a 21-inch tri-spoke rim in gloss black or a 22-inch rim with five Y-shaped spokes in gloss black or Pale Brodgar Satin. All that combines to give the car a new dose of attitude.

Inside the Flying Spur S  Bentley

The interior has also been freshened up a little. The variant is available with a sporty two-tone color scheme that combines leather and a suede-like material called Dinamica. Its seats are fluted and quilting is available as an option. The headrests are embroidered with the “S” or Bentley logo. Other new elements include a motorsport-inspired graphics for the driver’s gauge, metal “S” badge on the dashboard and illuminated treadplates.

Bentley gives drivers two powertrains to choose from. The first is a 4.0-liter twin-turbo V-8 that churns out 543 horses and 568 ft lbs of twist. It can push the car from 0 to 62 mph in 4.0 seconds on its way to a top speed of 198 mph. It also connects to a sport exhaust that lets the engine growl. The second option is a 2.9-liter, hybrid-assisted V-6 which can pump out 536 hp and 553 ft lbs of torque. This setup pushes the car from zero to 62 mph in 4.1 seconds. Bentley didn’t announce a top speed for the hybrid, but you can drive 26 miles using solely electrical power. Both powertrains come mated to the Flying Spur standard 8-speed dual-clutch automatic transmission.

Other mechanical upgrades include all-wheel-steering, for improved handling, and Bentley Dynamic Ride, which the marque calls its ride-smoothing active anti-roll bars. Every Flying Spur S also comes with red-painted brake calipers, further distinguishing it from other models in the range.

We’ll get to see the Flying Spur S in action later this month when it makes its public debut at the Goodwood Festival of Speed. No release date has been announced, but it’s part of the 2023 model year so we’d expect it to start arriving on these shores later this year. No price has been announced, either, as of writing, but we’d expect it to cost somewhere in the mid $200,000 range.

Check out more images of the Flying Spur S below: