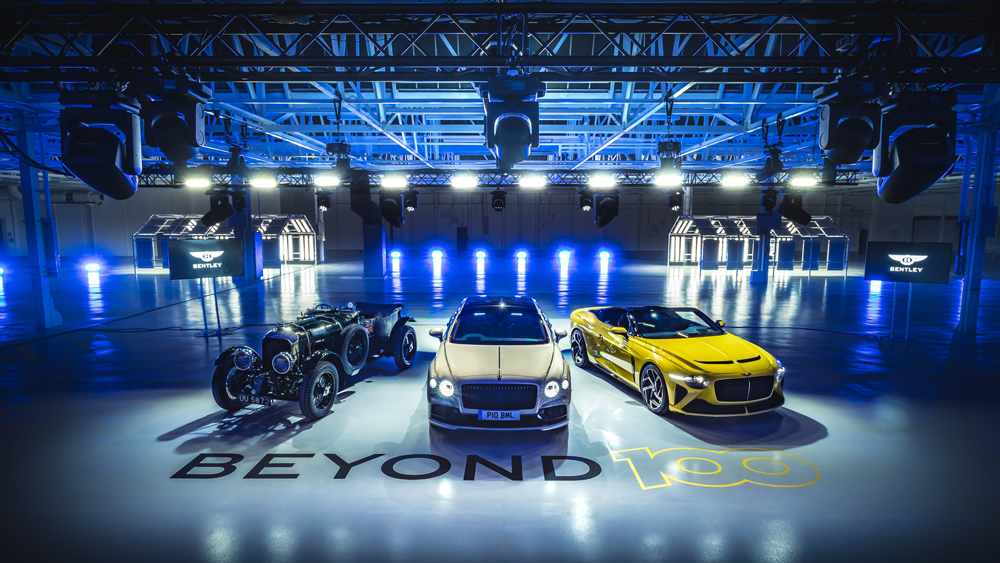 Few automakers can boast as long and as rich a history, both in motorsport and the luxury segment, as Bentley Motors Limited, founded by engineer Walter Owen (W.O.) Bentley in 1919. That history includes some rough spots, including bankruptcy in 1931 and the subsequent purchase by Rolls-Royce, which resulted in a turbulent period of diluted brand identity.

Through it all, the Flying B has endured (since 1998, thanks in no small part to the ownership of the Volkswagen Group) and has now mapped its strategy for the next century: the “Beyond 100” plan, which focuses on the global issues of sustainability and diversity.

“It’s trendy to talk about sustainability, but we’ve been ahead of the trend for a while,” said Bentley chairman and CEO Adrian Hallmark during yesterday’s virtual update attended by Robb Report. “In 1999, we achieved a global first, and that was an ISO [International Organization for Standardization] accreditation for environmental impact. We’re the first car company in the world to get that standard. Today, we’ve just got the next certificate, so that we’ve got now two year’s proof of carbon neutrality, partly from generating our own energy from solar and partly through buying certified green energy for the rest of our needs—a big step forward. Next step, of course, is our cars.”

On that front, Bentley’s goal is to have its lineup comprised solely of plug-in-hybrid (PHEV) and battery-powered (BEV) vehicles by 2026, with two PHEV models to debut in 2021; the plan is for model line to then become completely battery-powered by 2030. Basically, the 12-cylinder heart of the company will cease production, no doubt making today’s combustion-powered Bentleys prime fodder for the collector market. Bentley, though, admits that new regulatory mandates are driving the move to alternative power-train adoption.

“I won’t pretend that it’s not driven by regulation, because of course it is. But, definitely, we see the demand from the customers,” said Chris Craft, a member of Bentley’s board for sales and marketing. “[Of] our customers, 55 percent say they would definitely consider buying an electric Bentley in the next five years. But I think the key here is just the scale of the shift that we’re talking about achieving: the biggest manufacturer of 12-cylinder engines in the world, and suddenly all electric by 2030. This really is a transformation for the business.”

Another conscious shift will be in diversity within Bentley’s employment ranks. According to Dr. Astrid Fontaine, a Bentley board member overseeing people, digitalization and IT, the marque has the target that “by 2025, we want to be at 30 percent of diversity in our management team, with people coming from all walks of life.”

Bentley is also looking to alter the landscape of motorsport, the arena that built the brand. “A 24-hour electric race, or hydrogen race, would be fantastic,” Hallmark said. “But you need 24 cars, or a lot of batteries to keep it going. It’s a ways off before that’s possible, but we are already starting research and discussing with the organizers and regulators of motorsport to look at how that can be converted, by changing fuels for existing cars, but also developing new technologies. So, watch this space.”

While surrounded by recent releases that included the extremely-limited-edition Team Blower Bentley Continuation, coach-built Bacalar and new Flying Spur, Hallmark and board members said that, while the last 12 months were turbulent, they also served to reaffirm the marque’s resiliency. According to Hallmark, 2019 saw the company turn profitable again, with a record number of orders going into the new year (the second quarter of which, understandably, resulted in a record loss due to the pandemic). Bentley was facing the expected elimination of more than 800 positions, but the third quarter proved brighter.

Only 12 examples of the Bentley Team Blower Continuation will be produced for the market.  Photo: Courtesy of Bentley Motors Limited.

“I’m delighted to say that, even though that’s a difficult thing to do, there’s only 10 people out of the whole company that are at risk of compulsory redundancy,” said Hallmark. “The rest have all been done through reducing contractors and a voluntary process, and then redeploying people into new positions.”

Skeptics may wonder, rightly, whether these advertised objectives for sustainability, diversity and the revolution of motorsport will advance beyond a marketing department’s set of talking points, but at least Bentley has made itself accountable. Of course, with England in another lockdown, the greatest challenge for Bentley—as for us all—may just be getting through what’s left of 2020.