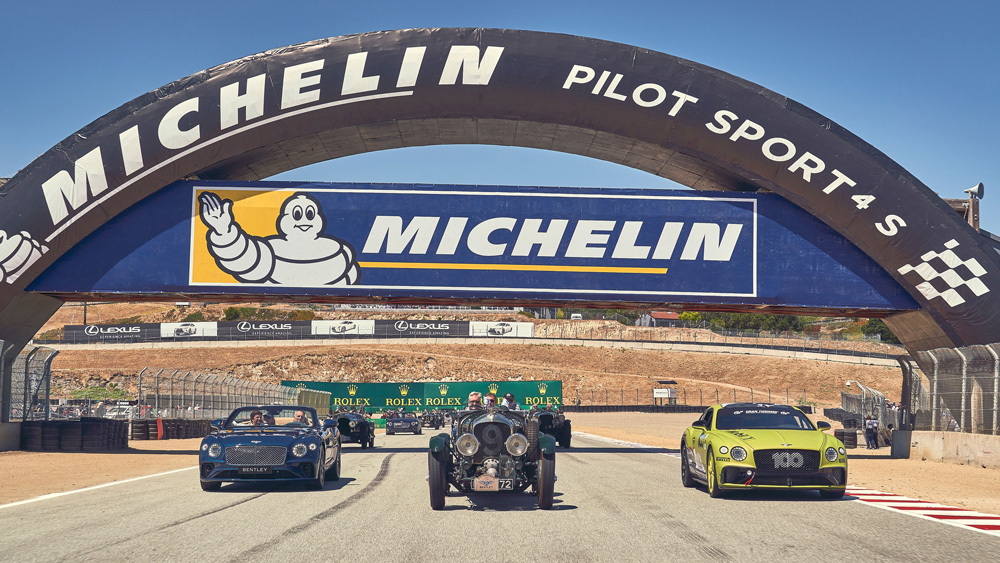 So this is what it feels to be a Bentley Boy. It may not be a European circuit circa 1920s, but coming down the infamous corkscrew at California’s WeatherTech Raceway Laguna Seca’s track, the wind rushes around my ears. The 4.4-liter engine thrumming through me. The thrill of it. The tenuousness of it, too. After all, this car is 91 years old. We’re not wearing helmets, and the single safety device is a thin waist belt around the hips.

The car was built in 1928, one of the fabulously vaunted “4 1/2 Litre” open-air machines designed to race Le Mans early last century. I’m in the left rear seat, waving to the cheering spectators in the stands. After all, it’s a celebration—Bentley’s centennial—one of the crowning events at this year’s Monterey Car Week in Northern California.

There’s few events like the annual automotive get together, which includes the races at Rolex Monterey Motorsports Reunion here at Laguna Seca and the Pebble Beach Concours d’Elegance. It is a bacchanalia of Champagne, spiffy clothes and amazing cars.

The Bentley Boys, a group of British aristocrats and race-car drivers famed for their heroics and bon-vivant lifestyles, would have fit right in. One wonders if they could have imagined Walter Owen Bentley’s brand 100 years after its founding.

The car I’m in today is owned by Todd Coady, an avid collector and a very able pilot of the Bentley. Exiting out of the corkscrew, the track offers up a steep, sweeping right hander that can easily catch you out even in a modern sports car. The 3,500-plus-pound Bentley descends quickly, gathering steam under its own accord. I’ve been told that the non-servo brakes on this thing don’t work very well.

For a moment, my heart flutters. The lateral g forces are pushing on the car, and it heaves under the stress, testing the thresholds of its bygone engineering. Are we going make it? The 4 1/2 Litre rolls through grandly, surviving the test, and Todd crams on the brakes at the hill’s bottom, where it rolls to a stubborn stop just behind the caravan of Bentleys heading into the pits. This may have been a “parade lap”—a chance for all to see the classic Bentleys in action—but the thrill is genuine.

It’s hard to imagine wheel-to-wheel racing in something like this. But in the late 1920s and early 1930s, that’s exactly what the Bentley Boys did, winning the 24 Hours of Le Mans with Bentley cars from 1927 through 1930. The men had recently exited World War I, and yearned for adrenaline and a chance to continue mixing it up with the Germans. Rather than taking to the battlefields in and over France, they instead took to the French roads at Le Mans, pitting Bentleys against Mercedes’s 7-liter SSK in the epic 1930 race.

“They pushed boundaries,” says Robin Peel, who runs Bentley’s Heritage Collection. “They were special and renowned. These weren’t just superficial playboys, but people who did great things in their lives.”

A famed member, Henry “Tim” Birkin, raced a supercharged car against the Mercedes in 1930. “The Blowers were very fast but not reliable,” explains Peel. “The Mercedes tried to keep up with them, and eventually both Mercedes expired.” Birkin’s car also gave up, but a non-supercharged Speed Six Bentley went on to win.

That very Birkin car is out on the track with us today: the 1929 Bentley 4 1/2 Litre Birkin Blower No. 2. The company owns it and uses it often. (Peel says the company has been told it could be valued around $25 million pounds but notes: “Not that we would ever sell it, of course.”) On Sunday, it sat on the lawn at the Pebble Beach Concourse d’Elegance but, honestly, it seemed more at home in action at Laguna Seca.

The cockpit of the 1929 Bentley 4 1/2 Litre Birkin Blower No. 2.  Photo: Courtesy of Bentley Motors Limited.

One hundred years of heritage is notable, but there may be little obvious connection to something like the Birkin Blower and the brand-new Bentley Continental GTC that I drove down to Monterey from San Francisco. But, on the winding routes between those two cities, I did find a commonality—one that I think a driver like Birkin would also have enjoyed: Joy.

They are both open-air cars, of course, and they were also both created for the joy of driving.  “This was the GT of its day,” says Peel of the Blower. “And we still build GTs like the Continental. There’s an absolute link between the thinking behind W.O. Bentley’s age and how we build cars today. That’s not manufactured. That’s genuine.”

Needless to say, the mix of owners in their 1920s and 1930s Bentleys also own the modern equivalents, from Flying Spurs to the Bentayga SUV. Says Peel, “There’s an ethos found in the current day Bentley Boys—our owners and customers. They too are adventurous people pushing boundaries. They are hard-working, successful, and they like to do adventurous things in our cars.”