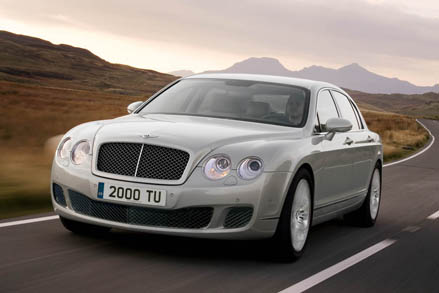 In 1923 Bentley Motors founder W.O. Bentley coined the “Speed” moniker in response to his customers’ emphatic requests for a more menacing version of the automaker’s 3 Litre model. The 3 Litre Speed lived up to its name and promptly defined Bentley as a premier manufacturer of high-performance motorcars. Flash ahead 85 years: The Speed name is back at Bentley, and on the winged heels of last year’s sensational Continental GT Speed coupe comes the Continental Flying Spur Speed sedan. The four-door Speed enjoys the same mechanical and aesthetic upgrades as its two-door sibling, including more power (with no sacrifice in fuel economy) and a superabundance of paint, leather, and trim choices. As in the Continental GT Speed, the 6-liter twin-turbocharged W-12 engine boasts lighter pistons and connecting rods and a new crankcase designed to minimize energy loss due to friction, bumping horsepower from an already impressive 552 to 602. Delivering its colossal oomph to all four wheels through a responsive 6-speed automatic transmission, the reinvigorated engine enables a 4.5-second voyage to 60 mph and a 200-mph top speed. Bentley stylists and engineers were laudably reserved in defining the look of the Flying Spur Speed, lowering ride height by 10 millimeters, subtly reshaping the front fascia, and adding sharp new 20-inch wheels shod with bespoke Pirelli tires. All told, the Speed specification adds a less-than-modest $24,400 to the Flying Spur’s $174,100 sticker price. Notable options include Bentley’s gargantuan carbon-ceramic disc brakes ($16,500) and a truly astonishing 15-speaker, 1100-watt audio system from lofty British hi-fi purveyor Naim ($6,900). The world’s fastest four-door rumbled into Bentley dealerships this fall. (www.bentleymotors.com)