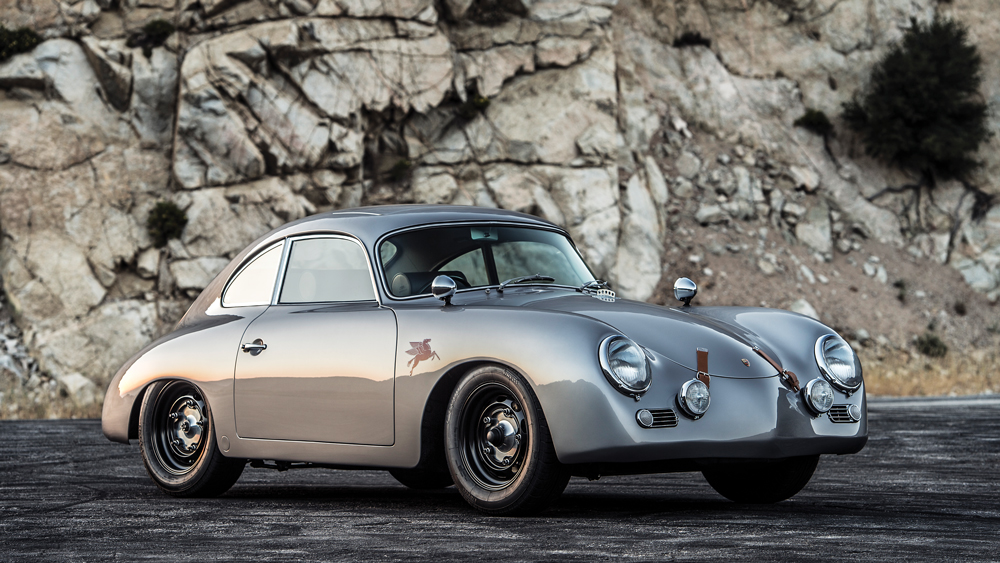 Troy Ladd, owner of Hollywood Hot Rods (HHR), lives in a world where off-the-rack doesn’t fly. Either build it from scratch, make it perfect, and take the trophy—or go home. That commitment to cars and creativity makes him a magnet to anyone interested in a ground-up automotive build, classic restoration, or reimagination. For instance, when his client commissioned a full-house custom based on his favorite grille design and the car that originally wore it, Ladd and his team embarked on a 6-year project.

Inspired by a rusted 1936 Packard 1401 coupe and the drawings of designer Eric Black, all the parts—with the exception of some original sheet metal—were handmade by HHR Fabricators. The car’s one-off frame supports a custom, adjustable-height suspension and a 1941 Lincoln V-12 engine, with a rare 1950s-era Latham supercharger.

Seating two, the Cognac-colored leather interior is highlighted by revised Packard instruments in the dash. A concealed umbrella in each doorjamb and a hidden flask add nostalgic touches. Ladd’s creation, dubbed the Mulholland Speedster, is finished in Mulholland Merlot, a deep red that reflects
the Packard’s grand era.

The Mullholland Speedster was awarded the single highest honor at the 2017 Grand National Roadster—America’s Most Beautiful Roadster—and has won every significant award in the industry since.

Masters of zero-emission mobility, David Benardo and Bonnie Rodgers cofounded San Diego–based Zelectric Motors to bring electric power-train technology to classic Volkswagens and Porsches. “The upgrade invisibly outfits them for the 21st century,” says Rodgers. “Our process, however, ensures that the vehicles remain fully intact and uncut as a tribute to their timeless design legacy.”

Based in Austin, Texas, the two-wheel technicians at Revival Cycles cover the gamut from full restorations to custom fabrication to bespoke builds. “Our resolve is to make each motorcycle more than a machine,” says founder Alan Stulberg. “We want it to be an aesthetic expression that demonstrates the beauty of purposeful form.”

Owners looking to enhance their own examples of the Porsche 993—brought stateside from 1995 to 1998—can do so with the help of Guntherwerks. Starting at $525,000 (without car), the automotive house will create a bespoke beast dubbed the 400R—its current limited-run production—that upgrades every substantive component. Each example is powered by a 4.0-liter, naturally aspirated air-cooled engine by Rothsport that produces more than 400 hp.

Icon’s Jonathan Ward, known for reimagined Toyota Land Cruisers, creates his Derelicts from distinctive old cars, upgrading every invisible aspect to create fire-breathing muscle machines. The $350,000-plus creations are built from the ground up on custom chassis and contemporary drivetrains. The interior conceals modern systems and amenities. Rust is only a skin-deep affectation, as the entire body is protected by a modern finish.

Whichever side of the road one drives on, Rod Emory will build a rally-inspired, bantamweight fighter that blends the best of the old with custom details and modern performance—all starting at $250,000 and weighing in at just 2,100 pounds. Emory calls them Outlaws, like this 1959 Porsche 356 A that features a 4-cylinder Porsche engine bored out to 2,650 cc.