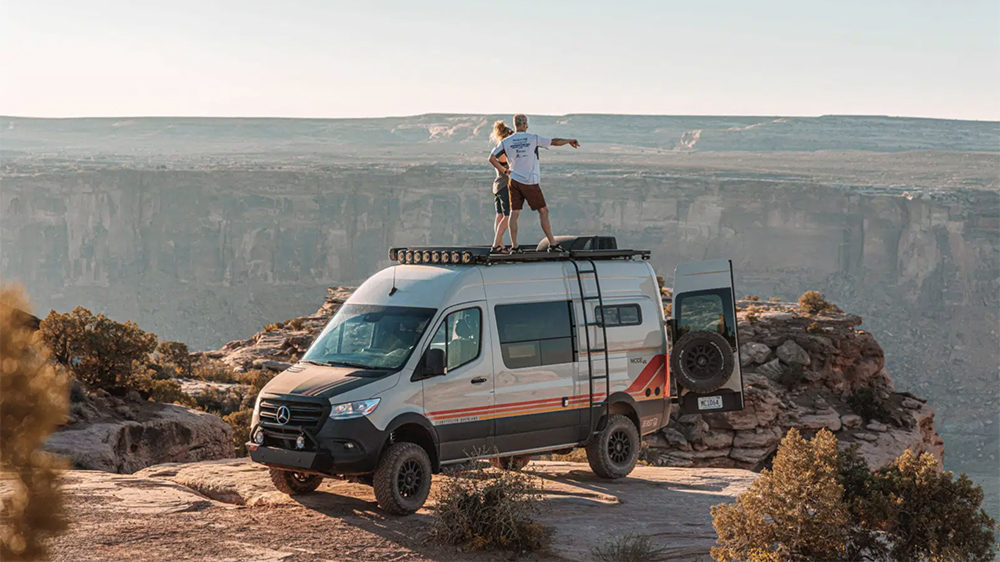 After the last year-and-a-half, we’ve all come to a better appreciation of how just important it is to get away from it all. Taking a break from the day-to-day grind is vital to our health and sanity. Sure, vaccines have made travel easier again, but you’d be forgiven for not wanting to spend time aboard a crowded plane anytime soon. Luckily, there’s no need to suffer the airport hordes. It so happens that we’re living in something of a golden age for luxury campers and trailers, which has made it easier than ever to take your life on the road without sacrificing comfort. And now, there are plenty of outfits giving the same treatment to camper vans. They may not be able to sleep as many people their hulking cousins, but these all-in-one vehicles come loaded with creature comforts like high-end kitchens, WiFi-enabled multimedia systems and plush beds. Plus, their more compact size means camper vans are more agile, making them a tad more off-road friendly and a whole lot easier to park. Below, 10 campers that will let you experience #vanlife in comfort and style.

There is perhaps no brand more closely associated with the trailer life in America than Airstream. Thankfully, the company isn’t afraid to branch out. Just look at the Interstate 24X, the trailer maker’s attempt to take the camper van to new heights. Built on the bones of a Mercedes-Benz Sprinter—like a lot of the models on this list—the vehicle has everything you need to rough it in comfort. Airstream has done a lot to maximize space in its climate-controlled cabin. A modular dining table doubles as a desk, and it can be easily converted into the largest sleeping area in a Class B Motorhome. There’s also a full mini kitchen and bathroom. You can take the van off-roading, too. In addition to a 3.0-liter turbo-diesel V-6 engine that churns out 188 hp and 325 ft lbs of torque, it also comes equipped with four-wheel drive, a height-adjustable suspension and all-terrain tires. Pricing for the all-around beast starts at $213,850.

Inside the Airstream Interstate 24X  Airstream

It can be easy to forget at times due to its ubiquity in camping circles, but the Sprinter isn’t the only van Mercedes-Benz makes. The Citan is its smaller, city-centric cousin. Despite its smaller frame, it can also be turned into a more-compact luxe camper van. The German marque has done most of the hard work for you with the new Tourer variant. It’s smaller than some of the options on the list—its dedicated sleeping area only has room for two adults, although you can fit two more in the seats up front—but it does feature its own built-in kitchen. Open up the rear hatch and you’ll have access to almost everything you need to fix a home-quality meal. One thing to note: The van’s modest, Renault-sourced 1.5-liter diesel engine produces just 94 horses, so you’ll want to stick to paved roads. No pricing has been announced yet, but expect it soon.

Inside the Citan Tourer  Mercedes-Benz

Jayco is best known for its hulking travel trailers, but like Airstream it can do compact, too (well, compact enough to fit in a parking space, that is). The US company’s new Terrain model, which starts at $192,000, is an adventure van designed for those who like to veer from the beaten path. As the name suggests, it’s designed for off-roading, with a turbo-diesel V-6, Koni shocks, a rear stabilizer and a rear hitch strong enough to tow an additional trailer if you need more room. Inside, it’s a little spartan compared to some other options on this list, but its kitchenette can be converted into a sleeping area with room for a full-size bed, as well as plenty of storage space beneath. There’s even a built-in awning when you need some shade in the summer months.

Inside the Terrain  Jayco

Storyteller Overland’s latest offering is a true adventure van. The Beast Mode 4×4 is the Birmingham, Alabama-based outfit most feature-packed model yet and was designed specifically for overlanding (as you may have guessed from the company’s name). It’s a true 4×4 powered by a 188 hp turbodiesel V-6 that’s strong enough to tow an additional 5,000 pounds. Its slick retro-style livery is offset with loads of useful off-roading gear, too, like an LED light package, roof rack and side ladder and custom wheels wrapped in BF Goodrich K02 tires. Inside, you’ll find everything you need to relax after a day of exploring, including a cushy lounge that can be converted to a full-size sleeping area. There’s even a climate control system to ensure you’re comfortable no matter the weather outside. It’s priced at a flat $198,746, for everything listed above.

Inside the Beast Mode 4×4  Storyteller Overland

Camper vans tend to be smaller that full-size campers and trailers, but if you want one with the maximum amount of space, Loef has you covered. The company’s latest luxury model spans 24 feet from bumper to bumper and is nine feet tall. That means its wide-open cabin has more than enough room for a full kitchen, bathroom and entertainment area that converts to a spacious sleeping nook once the night’s festivities are over. There’s also a slide-out Big Green Egg Mini Grille built into the rear door so you can have an outdoor barbecue when it’s nice out. While the $150,000 van’s main virtue is its luxurious interior, the 2.0-liter turbodiesel engine ensures that you’ll have enough power to navigate any road.

Thor Motor Coach makes camper vans for those uninterested in making sacrifices. With the Sanctuary, the company has taken Mercedes-Benz’s already excellent Sprinter 2500 4×4 and turned it into something you could easily live on—on or off the grid. The off-road-ready vehicle comes in two configurations—the 19P ($148,680), which features a back bench that converts into a bed, or the 19L ($151,060), which has a fixed double bed. Even with the bed there’s still plenty of room for other creature comforts, including a bathroom, entertainment area with a TV and a kitchen with a sink, dual-burner cooktop, convection microwave oven and fridge. An Onan 2500 LP generator keeps everything up and running, too, including an A/C system you can leave on for eight hours at a time. There’s also retractable power awning when you want to spend some time outdoors, too.

Inside the Sanctuary  Thor Motor Coach

If you don’t like the Mercedes Sprinter, it can be hard to find a refined camper van. Luckily, the Fiat Ducato should do the trick. The Italian automaker’s van, which starts at $48,000, is a great base for anyone looking to build their own compact motorhome. Available in four different wheelbases—9.8, 11.3, 12.5 and 13.2 feet—you can customize it to feature everything you want to take with you on the road, including an entertainment and sleeping area, as well as a kitchen. There’s are also several powertrain options to choose from. The brawniest generates up to 180 hp and comes mated to a manual transmission for the purists who can’t imagine driving anything else. The company also plans to launch an electric version in the near future.

Inside the Ducato Base Camper Van  Fiat

Airstream isn’t the only famous RV maker that’s gotten into the camper van game. Winnebago actually sells several, and our favorite is the luxe Boldt. Despite being nowhere near as long as one of its campers—it caps out at 22 feet in length—the $230,276 van has everything you’d expect from the larger vehicle, including dedicated living and sleeping areas, a fully functional kitchen and a bathroom equipped with a shower. You also have several interior décor options to choose from, each of which delivers an updated take on classic Winnebago style. The Boldt is designed for paved roads and campgrounds, but if you want a more rugged ride, the brand also offers the off-road-ready Revel.

Inside the Boldt  Winnebago

Take one look at Sportsmobile’s Sprinter 4×4 and it’s clear what its designers had in mind: off-roading. Whether you go with the 12- or 14-foot configuration, the Texas outfit’s stripped-down take on Mercedes’s ultra-popular van comes equipped with a 3.0-liter BlueTec V-6 connected to a five-speed automatic transmission and pumps out 188 hp and 325 ft lbs of torque. That should be more than enough to tackle even the toughest terrain. Inside, you’ll find a spacious living area with a full-featured kitchen. If you want even more room, you can also opt for a pop-up sleeping area that’ll make it that much easier to lounge in comfort.

Inside the Sprinter 4×4  Sportsmobile

If you’re struggling to find a van that checks all your boxes, Glampervan may be worth a look. Using the Ram Promaster 136 as its base, the Oakland-based company will help you build the vehicle of your dreams whether your main priority is work or play (or both). The fully loaded version starts at around $80,000 and has a spacious interior with a full kitchen, plenty of storage space and a lounge area that can be converted into a bed. The van is powered by a solid 3.6-liter V-6 that churns out a respectable 280 hp and 260 ft lbs of twist. That mill and a slew of off-road accessories, including all-terrain tires, mean you’ll be able to have some run with the van, even after the road runs out.

Inside the Promaster MUV  Glampervan