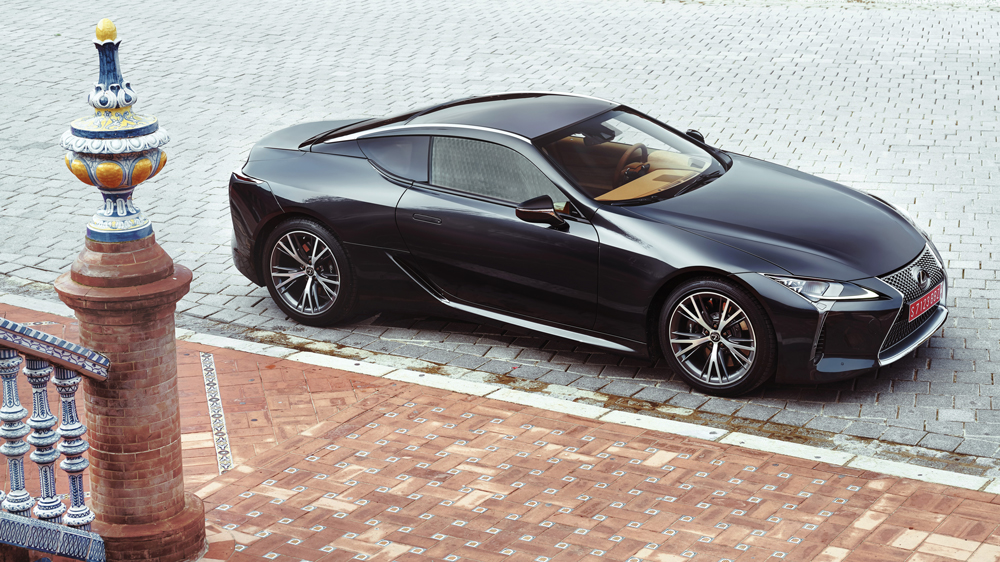 Lexus LC 500
The LC 500 showcases the next step in Lexus design with its low and wide stance, giant wheels, and a front end that looks like an expressive face. Some of the design elements—including the almost sinister-​​looking headlights and taillights—were inspired by the LF-LC concept car, which Lexus debuted in 2012. A 5-liter 471 hp naturally aspirated V-8 powers the full-size coupe. The new rear-wheel-drive platform’s chassis and suspension keep the ride solid and comfortable. The LC 500’s demeanor ranges from relaxed to spirited, depending on the drive mode you select. The new 10-speed automatic transmission conserves fuel on the softest setting and holds the gears in sport mode. Nearly every surface in the cabin is covered with leather or Alcan­tara, and the exterior color selection offers several attractive metallics(from $92,000).

Mercedes–AMG GT C Roadster
Although it’s powered by the same 550 hp 4-liter biturbo V-8 as its coupe counterpart, the GT C Roadster isn’t just a chop job. The car’s body is almost all new, sharing only the hood, doors, and rear wing with its fixed-roof sibling. It also differs in appearance from the standard GT Roadster: Its stance is lower and wider, its fender flares are larger, and its Panamericana front grille is wider. The grille houses active shutters that enhance the car’s aerodynamics. The GT line was designed entirely in-house by AMG, Mercedes-Benz’s high-performance division, giving the models a pure, direct connection to the company’s racing technology.

With help from a crisp 7-speed dual-clutch transmission, the GT C Roadster reaches 60 mph from a standstill in 3.9 seconds. In addition to offering effortless straight-line acceleration, the plucky drop-top conquers sweeping turns and off-camber corners with poise and precision, thanks in part to an electronic limited-slip differential and rear-axle steering borrowed from the GT R, Mercedes-AMG’s street-legal racecar.

The GT C Roadster’s sport seats sit low to the ground, enhancing the occupants’ sense of being connected to the road. Carbon fiber and glossy black trim accent the leather upholstery, and the flat-bottom sport steering wheel is wrapped in an Alcantara-like material. When the fabric top is lowered, the cabin remains surprisingly calm, allowing for easy conversation and preventing coiffures from becoming overly wind whipped (from $157,000).

Porsche 718 Boxster S
Puristic design, lightweight construction, and efficient power are the hallmarks of the latest-generation Boxster S. It’s named for the Porsche racecar that earned podium finishes at the 24 Hours of Le Mans and the Targo Florio in the late 1950s and early ’60s. The 718 Boxster S is powered by a 350 hp 2.5-liter turbocharged 4-cylinder boxer engine that is more powerful and more efficient than its predecessor’s flat 6. The car comes standard with Porsche’s dual-clutch PDK, but enthusiasts can order it with a 6-speed manual. The steering system is borrowed from the current 911, and it keeps drivers dialed in. Porsche’s optional adaptive suspension ranges from compliant to rock solid. If you’re not afraid of sharply graded driveways, you can order the 718 Boxster S with a ride height lowered by 20 millimeters, to optimize performance (from $68,400).