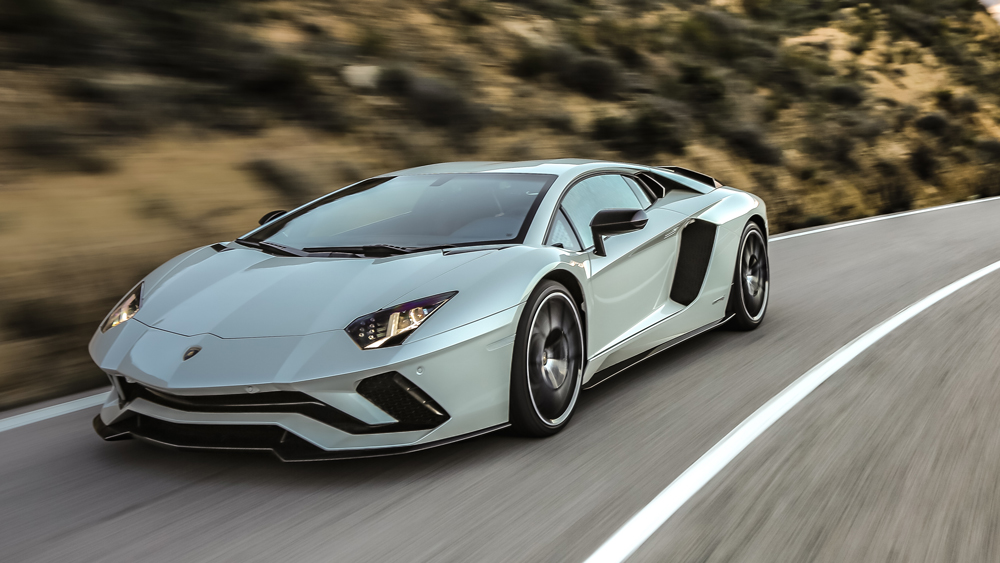 The two-seat coupe’s V-12 now generates 740 hp, and the running gear benefits from the addition of four-wheel steering. At lower speeds, the rear wheels turn as much as 3 degrees in counter-phase to the front wheels. At high speeds, they join phase with the front wheels. With this feature, it’s as though the car has a set of hips that judiciously shifts one way or the other.

Snakes, spaceships, and jets inspired the redesigned bodywork. It includes slit eyes and fang-like elements in front, a prominent crease above each rear wheel, a bristling rear deck, and three exhaust tips clustered together like rocket nozzles. The redesigned front splitter and rear diffuser contribute to a 130 percent increase in front downforce compared to the original Aventador.

Though the Aventador S can accelerate from zero to 62 mph in 2.9 seconds and reach a top speed of 217 mph, it is easy and friendly when loafing along a mountain road on a rainy day. (lamborghini.com, starting at $421,000)—Ronald Ahrens

Aston Martin DB11
Aston Martins have always been lookers. Agent 007’s DB5 is still stealing glances today, and slab-sided “British Camaros” from the 1980s are more appealing now than they were then. The DB7 ushered in a new age of elegance, and the DB9—introduced in 2003—remains a high-water mark of 21st-century automotive design. The DB9 was a tough act for the DB11 to follow, but the new grand tourer doesn’t disappoint. Indeed, it may even eclipse the DB9 with a design that is sure to become classic and has set the stage for the 104-year-old carmaker’s “Second Century” plan.

The DB11’s aerodynamic efficiency is abetted by concealed channels that allow for an uncompromised flow of form and line from front to rear. Under the car’s composite-and-aluminum skin is a new aluminum spaceframe chassis. The front-mid-mounted twin-​turbocharged V-12 engine produces 600 hp and a top speed that exceeds 200 mph, making this the fastest and most powerful DB ever.

The interior features a quirky combination of futuristic design and old-fashioned craft. The optional brogue detailing adds a wing-tip flair to the seats and upholstered panels, and the information-​and-entertainment system, courtesy of Daimler, brings the DB model line from the Stone Age into the future. An optional Bang & Olufsen music system provides the tunes.

The DB11 might be worth owning for its beauty alone, but wallop the accelerator and the car delivers a visceral punch and a satisfying wail. And once it’s under way, it negotiates the road with grace and tenacity. (astonmartin.com, from $211,995)—Robert Ross

Porsche 911 Turbo S
In the early years following its launch in 1974, the 911 Turbo had lots of power and skittish manners. A car that did not suffer fools, it would swap ends like lightning, usually with disastrous results. The latest top-of-the-line 911 Turbo, the 911 Turbo S, has more than twice the power of the original, but its stellar performance is as manageable as it is exhilarating.

The 580 hp 3.8-liter engine, the zero-to-60-mph time of 2.8 seconds, and the top speed of 205 mph tell only part of the story: They don’t describe the well-rounded driving experience that the 911 Turbo S offers. The all-wheel steering is light, communicative, and precise; the suspension is compliant and smooth; the all-wheel drive is sure-footed without being intrusive. The interior, thanks in part to the broad view through the windshield, makes other sports-car cabins feel as claustrophobic as a can of sardines. The 911 Turbo S’s cabin also features seats that are first-class, flawless ergonomics, and superior materials and build quality throughout. Together, they turn every minute behind the wheel into an aesthetic experience that feels as natural as an Eames lounge chair.

This combination of just-right, tried-and-true attributes underpinned by ever-evolving engineering and performance elevates the Turbo S above the fray of finned, furious supercars that seemingly change costumes every model year. In contrast, the 911 Turbo S is imbued with a timeless quality. It’s like a classic blue blazer in a world of fleeting fashion. (porsche.com, from $188,100)—RR