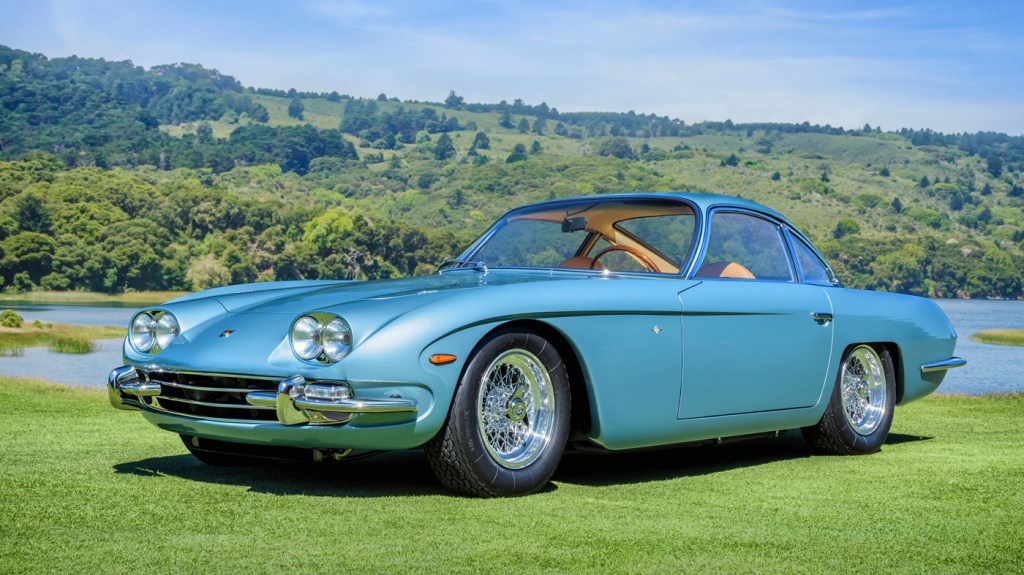 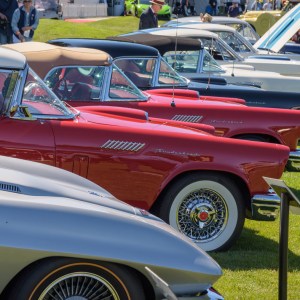 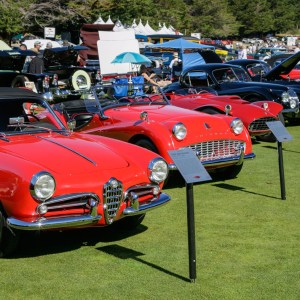 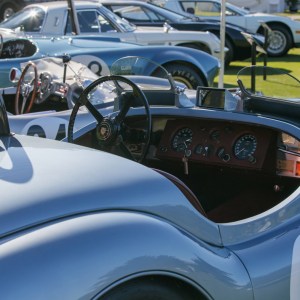 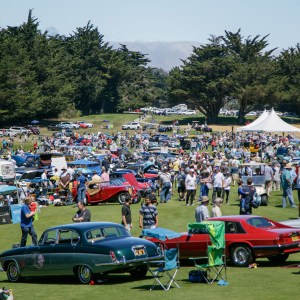 The 2018 Hillsborough Concours d’Elegance—the world’s longest continually running concours—marked its 62nd year on Sunday, July 15, with an opulent spread of pre-and post-WWII classic cars and motorcycles. Presented on the rolling lawns of the Crystal Springs Golf Course in Burlingame, Calif., about a 15-minute drive from San Francisco International Airport, the setting is often compared to Pebble Beach.

Hillsborough, however, is not as well known as its many counterparts hosted on the Monterey Peninsula to the south every August, though it is highly regarded by entrants and judges alike. This year’s Hillsborough event counted 210 automobiles and 10 motorcycles—most of them impeccably restored; some purely original. There was a beautiful assortment of European and American rolling stock on display, with a Japanese treasure or two sprinkled in for good measure. Two unlikely bedfellows—Lamborghini and Buick—were the featured marques.

There were Buicks aplenty, from a stunning—and gigantic—1910 Model 16 to a 1963 Riviera. The latter presents perhaps the most beautiful ‘60s-era design by any American carmaker. Early Lamborghinis, on the other hand, were under-represented, despite the organizers’ best-laid plans to attract an example of every model. What did turn up was a highly original Espada Series III, a Miura S with Jota features executed by none other than Bob Wallace—factory test driver and builder of the one-and-only original Jota prototype—and a 400 GT, fundamentally identical to the first production car from Lamborghini, the 1964 350 GT.

As the late comedian Rodney Dangerfield used to lament about himself, the Lamborghini 350 and 400-series GTs “don’t get no respect.” With fewer than 400 examples of the two- and four-place Touring-bodied GTs made, and fewer still remaining, it’s not surprising that the understated GTs have always been overshadowed by their audacious siblings, the Miura and Countach.

The 1966 400 GT displayed is a car with which I’m familiar, having owned it since 2002. With a body designed and fabricated by Milanese coachbuilder Carrozzeria Touring, Lamborghini’s GT made an impression on me long ago, though decades passed until the opportunity to acquire one afforded itself. A lengthy, diligent search around the world revealed the ideal candidate; like the girl next door, it turned up in my own Southern California backyard. But in this case, the car had been squirreled away in a dark garage for many years. Not only complete and intact, it was a rare “Interim” model, featuring a four-liter V-12 with Lamborghini’s own transmission and differential, in contrast to most of the two-seat GTs that use a 3.5-liter engine, and gearbox and rear end from ZF and Salisbury, respectively.

A restoration was commissioned from Lamborghini specialists Bobileff Motorcar Company, and completed in time for the 2003 Monterey show season. The car acquitted itself with trophies from Lamborghini Club America and Concorso Italiano, then was shown the following year at the Quail, a Motorsports Gathering. But apart from an occasional local outing, it hadn’t been on a lawn since.

The 1966 Lamborghini 400 GT named Best of Show at the 2018 Hillsborough Concours d’Elegance.  Photo by Ron Kimball.

For those who may be unaware, car restorations are like the Golden Gate Bridge: by the time the work is done, it’s generally time to start all over again. Or if not literally… almost. Time is no friend to complicated machinery made from all sorts of things. Metal, paint, rubber, chrome, leather, electrical systems, and hundreds of infinitesimal pieces fall prey to entropy at varying rates, and even the most exquisitely preserved Fabregé egg—or automobile—needs attention after a while. In the case of the 400 GT, it was time for a massage in the car spa.

Perfectionism can be an evil addiction. But it can also be a trait that bestows great rewards for those so afflicted. Realizing the need for a committed partner in the project, I enlisted my old friend Joseph DeMeo to undertake the formidable task of making the Lamborghini the best that it could be. His own 1986 Porsche Turbo has won more than 100 trophies for either Best in Class or Best in Show, including three Manhattan trophies, the Porsche Club of America’s highest award. Chasing perfection is what makes this restorer tick. Nearly a year and a half of concours ministrations in DeMeo’s shop addressed each surface and system of the 400 GT. He went deep to perfect every inch of the car’s anatomy, ensuring that mechanical and electrical components were operating without issue, and that all finishes and hardware were correct—and flawless. The research that goes into restoration taxes the patience of the most obsessive mind. It also calls upon the expertise of specialists in everything from plating to sourcing period-correct parts, such as hoses. And the decals and clamps for those hoses, for instance. If the devil is in the details, an entire circle of Dante’s inferno is reserved for the monsters lurking in a restoration.

Competitors never quite know which cars will grace the concours field, and this year’s Hillsborough event had an impressive showing of Italian machines, chief among them Ferrari, in addition to some fine examples of Alfa Romeo, Maserati, Lancia, Fiat and “Etceterini” (long-defunct Italian marques like Abarth, Siata, and De Tomaso). Rolls-Royce, Jaguar, Mercedes-Benz, Porsche, and all manner of other European marques also occupied the show field. Of course, there was lots of American iron, from the aforementioned Buicks to every one of the “Big Three,” and some—like the beautiful Studebaker Avanti—that have become extinct. Part of the fun, whether showing or visiting, is to make a shortlist of cars one wishes one could own, and for me, picking a favorite is never easy. But perhaps the best part of bringing a car like the old 400 GT to a concours is surprising visitors, most of whom have never seen the earliest Lamborghini. “It’s so elegant and soft. It doesn’t look like a Lamborghini at all!”

Judges, meanwhile, are busy working (for free). It takes a lot of expert knowledge to evaluate a marque—even more so specific models—for authenticity, state of preservation or restoration, and that most subjective quality: elegance. Cars are evaluated by class judges who work together in groups of three, moving from car to car within a class. Owners must demonstrate that every system is fully operational, with all original accessories and tools present. Considering that most old cars lost these rare accoutrements early in their lives explains why a Ferrari toolkit, for instance, may be worth five figures on the collector market. Respectfully disagreeing with a judge who contests a specific detail is best done with proof, which is where a thick notebook of period photos and factory documentation—if such exist—become an essential part of concours preparation. And while Mr. DeMeo and I came prepared with our research, we were not prepared for what would transpire.

Alfa Romeo, Triumph, Siata, and Jaguar were among the marque’s representing Europe on the show field.  Photo by Ron Kimball.

After lunch, event stewards began placing little cards on the windshields of chosen cars. When we discovered a card on our windshield, I congratulated Mr. DeMeo for a job well done. By 2:30 p.m., cars within each class began to line up side by side in groups of three, and the announcer—car-world veteran Tim McGrane—presented third-, second- and first-place winners, each driving across the red carpet to receive a trophy. The Lamborghini was honored with the 1st Place Class Award, a thrilling culmination to nearly two years of work. But unlike the car’s owner, the day was still young.

The steward asked that we circle across the lawn and position the car back in line to receive one of 16 Perpetual Awards. I couldn’t imagine which: perhaps Best Closed Post-WWII? After 14 cars crossed the carpet, Tim announced Owner’s Choice! It was immensely gratifying that of all the cars on the field, other exhibitors voted for the 400 GT as the most desirable among them. But while handing off the perpetual trophy, the steward asked me to not drive off quite yet. Then, before I could gather my wits, our announcer presented the winner of the 2018 Hillsborough Best of Show. I couldn’t believe what I was hearing, and I imagined the Lamborghini saying, “Sometimes, it takes a while to earn respect.”