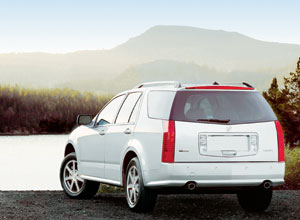 The American crossover undercuts the competition.

About a year ago, I joined a group of automotive journalists in Arizona to test-drive Cadillac’s revamped CTS sedan, its XLR convertible, and its SRX sport-utility vehicle, and uncovered a surprise: From a driver’s perspective, there is not much difference between the latter two autos.

On the first leg of our trip from Scottsdale to Sedona on a winding highway, I maintained a speed of about 85 mph with the XLR. To my disbelief, an SRX remained on my tail—even through fairly tight bends—leading me to question the judgment of a person who would drive an SUV so aggressively on such a road. After a driver change, however, I ended up in an SRX and, under similar conditions, had no trouble safely keeping up with the XLR. The SRX certainly could not challenge the XLR in a head-to-head handling competition, but it behaved more like a sports sedan than an SUV. Driving the SRX on the track at GM’s proving grounds the following day reinforced this notion.

When it comes to selecting an SUV, we are no longer faced with a truck-based, one-size-fits-all proposition, and the Cadillac SRX represents a continued exploration of specialized SUVs. The SRX addresses highly specific needs without trying to be a utilitarian panacea. Order yours with the 320 hp Northstar and all-wheel drive, and you will have one of the best-performing crossover SUVs available. Power arrives without hesitation, and the engine is mated to Cadillac’s impressive 5-speed automatic transmission, which offers clean, well-timed shifts.

The interior design follows the CTS’s lead: angular, high-quality plastics accented with wood. As with the exterior and its design-by-origami profile, the interior has its proponents and its detractors. The driver and passenger sit low for an SUV, enhancing the SRX’s carlike feel, and with a narrow cabin, three across in the second row of seats is tight. The third row, which collapses electronically into a flat cargo floor, is best limited to occasional use or for seating small children. However, the second row is elevated enough to allow occupants an excellent view of the road ahead.

And then there is the sunroof, a massive glass panel that slides open over the SUV’s first two rows of seats, providing the open-air sensation of riding in a convertible. The SRX can also be ordered with a fixed glass panel over the third row of seats to complete the sense of panorama.

A two-wheel-drive SRX with a V-6 starts at just under $40,000, but the fully loaded V-8 all-wheel drive that I drove tops $60,000—well into Escalade territory. Utility is not one of the SRX’s strengths; if the ability to haul larger items tops your wish list, look elsewhere. But if you are looking for a sports-oriented SUV, you cannot top this vehicle.

Since the SUV began carrying its moniker, Lexus has been one of the leaders in the market. In 1997, it launched the first-generation LX, the upscale version of the Toyota Land Cruiser. Then Lexus set the standard for car-based SUVs with its RX crossover. The Lexus GX470 bridges the gap between the two lines, offering nearly the same amount of interior space as the top-of-the-line LX470 within a smaller exterior envelope.

The GX470 shares a basic platform with the Toyota 4Runner and offers genuine off-road credentials. The interior, though, is pure Lexus. The cabin, which is swathed in high-grade leather and wood trim, provides occupants with a suitably hushed environment—that is, unless music is pulsing from the Mark Levinson sound system. The $45,900 GX470 is not the most powerful SUV in its class, but its 5-speed automatic transmission provides well-timed shifts and makes good use of the 235 horses from the 4.7-liter V-8.

The 5,631-pound Infiniti QX56 does not play well in small spaces. However, for drivers averse to parallel parking, congested side streets, and crowded garages, the Infiniti’s battering ram of a grille issues a proclamation—get out of the way—that can clear enough space for the vehicle’s 206.9-inch-long frame.

The menacing front end on the QX56 contradicts the SUV’s family-friendly interior, which can seat eight, double as a movie theater when equipped with a DVD system, and haul enough groceries to feed the state of Texas. When not performing car-pool duties, the rear-wheel-drive QX56, which the driver can shift to all-wheel drive, can sprint surprisingly well for its size. Its 5.6-liter, 315 hp V-8 delivers 390 ft lbs of torque at 3,600 rpm. This is enough thrust for you to merge the $47,400 QX56 confidently into highway traffic and to surprise those passengers who view the hulking three-row SUV only as a sedate soccer-practice shuttle.

The BMW X5 has become even more appealing in its latest iteration. The exterior, while slightly freshened, retains its signature bold and sporty look, but the X5 now drives better than ever. The $52,100 4.4i should be the enthusiast’s choice, thanks to its 315 hp V-8 engine, which offers a 25 hp premium over the previous block’s output.

The 6-speed X5’s increased power meets the road via xDrive, BMW’s new all-wheel-drive feature.The system adapts to imperfect road conditions, such as a wet back road or an icy highway, by adjusting the torque levels on the front wheels and operating with the X5’s traction control to regulate the speed of each wheel. While the car’s safety mechanisms are at work, the driver can enjoy the road and the X5’s comfort, confident that the car will minimize any danger.