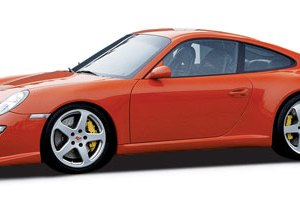 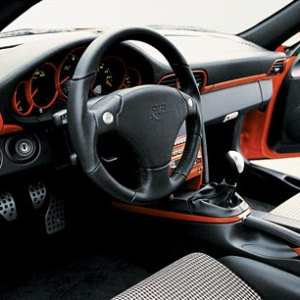 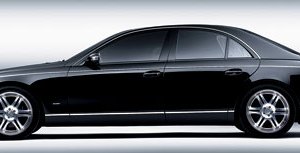 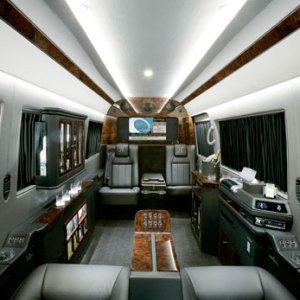 Many people see aftermarket tuning as a numbers game, in which the greater the figures for power and speed the better. The Ruf Rt 12 Turbo (starting at around $300,000 for the 650 hp version) arrives at this game ready to play, churning out 650 hp and reaching a 220 mph top speed. But how you play the game also is important, and the Rt 12 Turbo earned our Best of the Best honor in the aftermarket category for achieving those grand numbers without sacrificing its capability as a dependable daily driver.

Wriggle into the supportive cradle of the Rt 12 Turbo’s leather-lined sports seat, give the ignition key a twist, and experience the result of blending Porsche’s 40 years of 911 development—and its state-of-the-911-art 997 chassis and water-cooled 3.8-liter, flat-six engine—with Alois Ruf’s nearly three decades of high-performance tuning.

Ruf set the exotic car world on its ear in 1987 with his legendary 200-plus-mph Yellowbird CTR. These cars earned Ruf a loyal group of customers and certified manufacturer status in Germany and from U.S. regulators. He also has earned the respect of the Porsche factory, which supplies him with chassis shells sans serial numbers (referred to as “bodies in white”). Ruf uses them to build about 35 cars a year, each bearing its own Ruf Automobile serial number.

The Rt 12 Turbo begins as one of those 997 bodies in white, and then Ruf adds a fully adjustable Ruf sports suspension, five-spoke 9-by-19-inch (front) and 12.5-by-20-inch (rear) Ruf alloy wheels, and massive cross-drilled brake discs with aluminum Monobloc calipers. He also adds a number of exterior features—spoiler, rear wing, muscular rear fender flares—that enhance the car’s appearance as well as its aerodynamics and cooling functions. The heart of the Rt 12 is a twin-turbo, twin-intercooler engine available in a 3.6-liter, 530 hp format or a 3.8-liter, 650 hp version that, depending on the gearing selected for the 6-speed manual transmission, will propel the Rt 12 to 220 mph and blast it from zero to 62 mph in a mere 3.7 seconds.

Because of the current exchange rates, the Rt 12 Turbo carries a hefty price tag for U.S. consumers. But as a custom-tailored, safe, dependable, 200 mph car with a highly respected emblem on the hood, the Ruf represents a sure way to emerge from the aftermarket numbers game as a winner.

Large and in Charge

The 6.3-liter, 640 hp Brabus Maybach 57 (up to $800,000) is our choice for the because-we-can vehicle of the year. The Mercedes-Benz tuning specialist has a nearly three-decade-long track record of building very serious machinery, but this 195 mph executive suite on wheels demonstrates that even German engineers have their whimsical sides.

The concept for the car arose from a German automotive magazine’s invitation to participate in a tuning contest with other aftermarket performance specialists. Brabus entered an SL600 and, just for grins, a Maybach powered by a similar bi-turbo V-12. The limo was equipped with two computers, wireless Internet, a pair of 15-inch color monitors, and other necessities that included a champagne cooler.

For those days when you prefer to leave the driving to someone else, consider a chauffeur-driven Becker Automotive JetVan (from $125,000 to $275,000). “Not only does it give you the ability to relax and enjoy,” says Becker Automotive Design CEO Howard Becker, “the amount of concentrated work you can do in an hour’s commute can be augmented by the fact that you’re on wireless high-speed Internet. When you get to the office, you’re an hour ahead of where you would have been.”

Becker begins with a Dodge Sprinter, the U.S.-market version of Mercedes’ globally popular Sprinter van, transforms it with European trim, and adds special (but not ostentatious) headlights, side steps, wheels, and tires. The brakes and suspension are upgraded, and the engine is tweaked to 200 hp and 300 ft lbs of torque.

Custom-designed to customer tastes and needs, JetVan interiors, as the vehicle’s moniker suggests, resemble those of private jets, offering elements of a state-of-the-art mobile office and a top-of-the-line home theater. Even the intensity-adjustable advanced LED overhead lighting emulates that found in private aircraft.

Steve Saleen begins with one horse, a Ford Mustang, and then stuffs 500 more under its hood (in place of the original car’s 300) to create the Saleen S281 Extreme ($61,000). Naturally, making the jump from 300 to 500 horsepower is no simple task. Saleen adds a supercharger to the 4.6-liter V-8 engine, along with special pistons, connecting rods, camshaft, valve springs, and crankshaft. A 6-speed transmission and a limited-slip rear axle are standard. He supplies bigger brakes—14-inch diameter in front—and wider Pirelli PZero tires on 20-inch alloy wheels. Saleen also upgrades almost all major suspension parts, so that using the available horsepower is both entertaining and safe. Attractive bodywork and interior modifications make the S281 Extreme as visually striking as it is fast.  —Ray Thursby