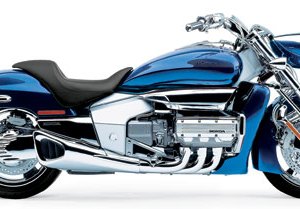 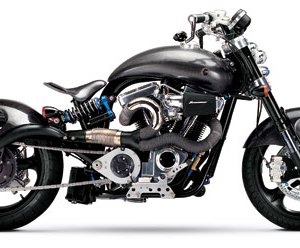 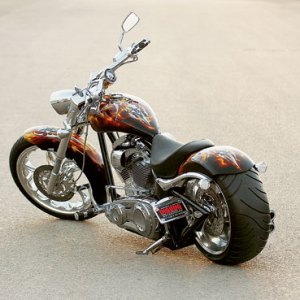 Harley-Davidson’s 2006 VRSCR Street Rod is the best in the cruiser class not just for its stellar road manners and engineering, but because the bike blazes a bold new path for the historically conservative company. Based on the hugely successful V-Rod platform, the $16,500 Street Rod pushes the all-American brand into edgier territory without betraying Harley heritage.

The Street Rod strays from Harley-Davidson’s tried-and-true cruiser formula by stretching the rider’s arms forward and legs back, and by raising the seat four inches. As a result, you sit at a sharper lean angle of 40 degrees, and the bike handles better than traditional Harleys.

While much of the Street Rod’s appeal derives from its well-balanced ergonomics, the bike’s main attraction is its water-cooled V-twin powerplant. Codeveloped with Porsche, the 120 hp engine combines Harley’s characteristic low-end grunt with a healthy powerband that extends to the 9,000 rpm redline. The engine features four valves per cylinder, dry sump lubrication, and hydraulically tensioned chains, but its high-tech traits are tempered by a deliciously throaty exhaust rumble that is unmistakably Harley.

Speed is nothing without control, and the Street Rod’s handling and brakes are reassuringly capable of reining in its mighty V-twin. An aggressively tuned suspension and vertically positioned inverted forks quicken steering and help mask the cruiser’s 617-pound dry weight. Powerful, four-piston Brembos give the Street Rod authoritative stopping power.

No single feature pushes the Street Rod to the top of its class; rather, it is the manner in which all of the bike’s functions work in concert with one another that does so. While the engine produces a satisfying amount of power, it never overwhelms the chassis. And while the suspension is tuned to handle the most challenging of roads, it is supple enough not to become tiresome on long-distance rides.

This harmony of operation gives the Street Rod a soul that is daring and wise, sporting and sensible. By embracing a futuristic vision while keeping one foot in its storied past, Harley-Davidson has managed to create a wholly original interpretation of the sporting cruiser.  —Basem Wasef

The Honda Valkyrie Rune has remained virtually unchanged since its 2004 debut model, but the motorcycle incorporates such extreme design and engineering themes that it continues to warrant recognition. With the release of the Rune, Honda made a bold statement—perhaps even shedding some of its perceived corporate staidness—by transforming an otherworldly concept bike into a production motorcycle that defies classification. A behemoth in presence, the $28,000 Rune is surprisingly lithe on the road. Honda seems to have borrowed engineering more from the airline industry than from the motorcycling world, and the bike’s 1,832 cc, 6-cylinder, liquid-cooled, horizontally opposed engine manages the motorcycle’s 811 pounds with aplomb. —Jeff Buchanan

Cat Out of Hell

While the cruiser genre has exploded into a myriad of cartoonish variations, no manufacturer has managed to reproduce the fantastically retro-futuristic style of boutique bike builder Confederate. The New Orleans–based company’s Confederate F113 Hellcat, a $62,000 motorcycle that looks like an AC Cobra 427 on two wheels, features sculpted arcs of carbon fiber alongside archaic elements such as a bicycle-style saddle. Its 113 cu in engine produces a raw and insistent grunt, but it marries gracefully to the chassis through a proprietary mounting system. The monstrously aggressive powerplant sends 125 hp and 134 ft lbs of torque at 6,300 rpm to the motorcycle’s 240 mm rear tires with surprising refinement. —Basem Wasef

With its stretched-teardrop fuel tank, light-alloy wheels, and wild custom paint schemes, the Big Dog Bulldog combines the appearance of a bespoke motorcycle with the quality and reliability of a production-line machine. The lean, mean, $33,000 cruiser is a dazzling work of art in chrome and one of the 90 available paint designs (encompassing such themes as flames and scallops), but the bike is more than just a showpiece. The Bulldog’s fat, 250 mm Avon rear tire is assigned the task of handling the considerable torque transmitted through the 6-speed gearbox from the 1,916 cc, V-twin powerplant. Air springs on the A-frame rear suspension allow Bulldog owners to customize the riding experience by making adjustments for the desired mix of comfort and handling quality. —Ray Thursby