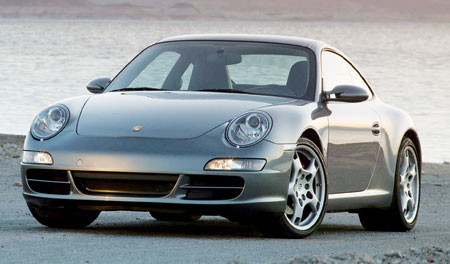 Apologies for repeating a decades-long mantra, but the best everyday sports car—the Porsche 911—has once again become better with the new-for-2005 997 series. Its most capable iteration is the Porsche Carrera S ($90,000), and the surprise to seasoned 911 fans is the extent to which it improves on its 996-based predecessors.

The car is more of a piece and altogether better looking, inside and out. Never has a 911 interior been so inviting; Porsche’s stern Teutonic aesthetic has actually softened, transforming the cabin into a space that is just shy of opulent. This is a sports car that is not a chore to take to the office at 7 o’clock on a Monday morning.

When automotive preferences follow roads less traveled, they can lead to Panoz Auto Development’s small factory set amid the vineyards of Hoschton, Ga. There, Dan Panoz and his crew of technicians have built the Panoz Esperante GTLM ($122,000), the road-legal version of the company’s Le Mans GT class competition coupe.

Underpinning the Esperante’s hand-stitched interior and hand-fitted aluminum body panels is an advanced modular chassis of aluminum, steel, and carbon fiber. The suspension and the subtly reshaped body panels are those of the Panoz Le Mans racer. The GTLM is powered by a 420 hp supercharged dohc Ford Cobra V-8 that delivers incredible performance and a most pleasing exhaust note.

Top-down motoring is enhanced by the GTLM’s quiet, turbulence-free cockpit. The tight-fitting, fully lined soft top is powered into place, and, in typical Panoz fashion, two sets of golf clubs fit into the trunk. The Esperante GTLM also is available as a hardtop coupe.  —Jan Morgan

If any proof is needed of the dedication Corvette designers and engineers bring to their work, a drive in the sixth-generation iteration of America’s sports car will provide it. Beneath the sleek exterior skin of the Chevrolet Corvette Coupe ($46,000) are the heart and bones of a Thoroughbred. Plenty of muscle is there, too; propelled by an all-alloy V-8 producing 400 hp, the Corvette rushes past 60 mph in just over four seconds on the way to a maximum speed beyond 190 mph.

Such performance demands a capable chassis, which the Corvette has, along with a luxurious cabin that is far superior in appearance and ergonomics than that of any previous iteration of the Corvette.  —Ray Thursby

From the very beginning, the essence of a Lamborghini has been its marvelous V-12 engine. Initially designed by Giotto Bizzarrini in 1963, the original four-cam 350 was a tour de force that trumped every card dealt by rival Ferrari. The powerplant in the current flagship—a high-revving, 6.2-liter V-12 producing 580 hp—remains the nucleus around which the incredible Lamborghini Murciélago Roadster (from $320,000) is fashioned. It is an engine that anyone who is passionate about machines should experience, and it demonstrates why the V-12 is still king.

The shape of the Roadster is derived from Luc Donckerwolcke’s original design for the Murciélago coupe, and though not as pure in form, the Roadster offers an open-air option while at the same time immersing driver and passenger in the V-12’s mechanical symphony.

When considered in practical terms, the Roadster may be bested by its coupe counterpart and by the smaller, more sensible V-10 Lamborghini Gallardo. But as a statement of Lamborghini flair in the tradition of yesterday’s Countach and Diablo, the Roadster is unequaled in the pantheon of exotics.  —Robert Ross

For a small but dedicated group of driving enthusiasts, common automotive features such as plush carpeting, 19-way power-adjustable seats, and electronic information and entertainment systems only detract from performance driving pleasure.

Among today’s production cars, only the Lotus Elise ($44,000) brings no-compromise performance into sharp focus. With its low mass, mid-engine chassis, precise controls, and naked aluminum floorboards, the Elise hardwires itself to the driver’s nerve endings, delivering incredible performance without distractions.

With a weight of only 1,980 pounds, the lithe Elise requires only 190 hp to sprint from zero to 60 mph in less than 5 seconds, and with a leechlike cornering grip that exceeds 1 g, it may be the best-handling production car available.

While the car is difficult to enter and exit, and many drivers may find that the Elise experience involves too much stimulation, American motorists looking for more than the jolt from their morning cup of Starbucks have ordered every Elise that the factory will build in the next two years.  —Jan Morgan