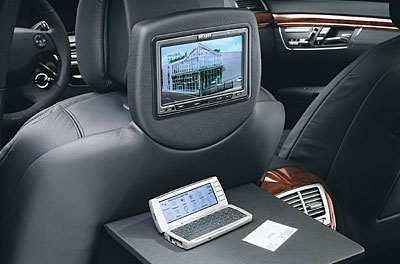 It used to be that Mercedes-Benz built highly capable sedans wrapped in utterly conservative bodywork. Even when the German manufacturer ventured into the realm of high performance—say, the 300 SEL 6.3 and the 450 SEL 6.9 in the 1960s and ’70s—it did so with little stylistic fanfare. This be­­gan to change in the late 1990s, after Mercedes-Benz acquired AMG. Cars started emerging from the factory with AMG-specified 500 hp engines, flared fenders, and 20-inch wheels. They appeared and performed as if they already had been sent to a tuner. The entire range of the 2007 S-Class—shaped with bulg­ing fenders and equipped with high-output engines—reflects this aggressive design and performance sensibility. Indeed, the new S-Class, as opposed to its predecessors, is not a subtle form of transportation.

But certain Mercedes-Benz drivers still want more, and Brabus is happy to oblige. Unveiled at the Geneva Motor Show in March, the $250,000 S V12 S Biturbo transforms the latest Mercedes-Benz S600 into a fire-breather with 730 hp and 973 ft lbs of torque—a substantial boost from the 510 hp and 590 ft lbs of torque that the standard car’s V-12 produces. (For those who might not require 730 hp, other Brabus versions of the S600 offer horsepower ratings of 580 hp, 630 hp, and 640 hp.) Brabus claims a zero-to-60-mph time of only 4 seconds and a top speed electronically limited to 211 mph. These would be impressive numbers for a sports car, but for a large sedan they are astounding.

The S V12 S Biturbo wears one-piece, 21-inch wheels made of light alloy, and a relatively limited body kit that includes front and rear aprons, side skirts, and a rear valance. Brabus has a tradition of lavish interiors, and this one is no exception: The cabin receives an ample supply of soft leather and Alcantara. Another Brabus specialty is creating mobile offices, and the tuner can convert the rear seat into a multimedia center with desks, monitors, and other accoutrements. U.S. customers may order Brabus cars through its Newport Beach, Calif., headquarters or through Mercedes-Benz dealers.