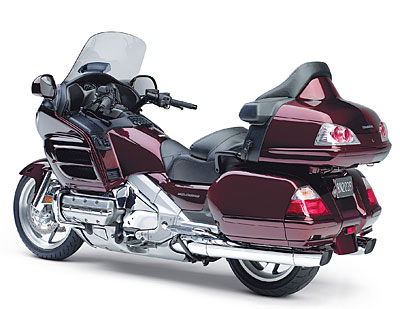 The Honda Gold Wing might be the most civilized means of traveling on two wheels. Its long list of optional features includes heated grips, heated seats and a heated passenger backrest, hot-air vents to keep your feet warm, XM Satellite Radio, an audio system with rear speakers and a trunk-mounted CD changer, a satellite-linked navigation system, and a remote trunk release. Indeed, a fully loaded Gold Wing (about $22,500 or $22,800, depending on the color scheme) comes closer to emulating an automobile than does any other motorcycle. Its kinship with cars, Honda cars in particular, extends to the instrument panel, which appears to have been plucked from the Accord. The Gold Wing also is the first production motorcycle equipped with an air bag.

The bike’s lengthy wheelbase, steering geometry, and considerable heft can make it challenging to ride at parking-lot speeds. But once you allow the Gold Wing’s 1,832 cc flat-six to propel the bike’s 838 pounds to highway velocity, that weight becomes more manageable. Turning still requires forethought and gen­erous lean angles, but the Gold Wing maintains its composure while banking, and a computer-controlled, adjustable hydraulic suspension tailors dampening to the rider’s preferences. When the Gold Wing is on the highway, the design of the fairing and bodywork redirects turbulent air away from the rider, producing an eerily peaceful ride, one that enables you to chat with others using the headsets that plug into the bike’s audio system.

Smooth, plush, and comfortable, the Gold Wing—a bike that was introduced in 1975 and has improved each year since then—shields you from the forces that usually dog long-distance enthusiasts, and at speed, its riding dynamics belie its dimensions, offering an experience that is at once luxurious and visceral. For those with an appetite for the highway, the Honda Gold Wing is the ride of choice.