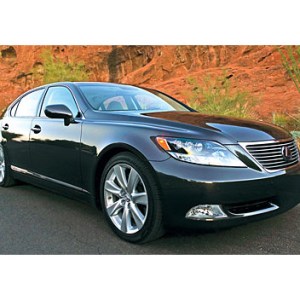 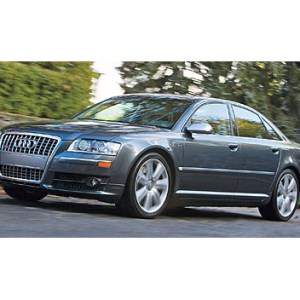 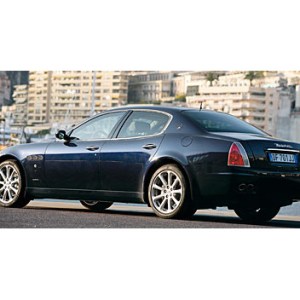 First came the Maybach 62, introduced four years ago as an 18-footer for elderly businessmen and their chauffeurs. Next was the smaller Maybach 57, designed more for those who prefer to do their own driving. Both hammered out 550 hp from biturbo V-12s. Then Maybach took its 57 to the back room, reinvented its V-12, and reintroduced the vehicle as the 57 S, with an almighty 612 hp. The latest model is the Maybach 62S (www.maybachusa.com), a car intended presumably for those who have hired unemployed superheroes or retired NASCAR drivers as chauffeurs. In addition to a 612 hp V-12, the $425,000 car is equipped with a Champagne refrigerator, rear seats patterned after the fold-down seats in Lufthansa’s first-class cabin, and lush leather and piano varnishes as far as the eye can see.

The Maserati Quattroporte Automatic (www.maserati.com) satisfies the wants of the world’s lazier motorists. Maserati reengineered its already popular GT sedan, replacing the lumpy, hunting DuoSelect gearbox transmission with a ZF 6-speed pure, simple, and smooth automatic. The company also has moved the gearbox from the rear toward the front and attached it to the back of the engine. The polished transmission produces a smoother ride and better handling, and it leaves the driver more content with both his car and his own skills. For those besotted by the style, pace, Pininfarina flair, and total beauty of Italian machinery, this Quattroporte Automatic offers nearly as much pleasure as does a Ferrari, but with a price of $112,250, it does so at half the cost.

The Audi S8 (www.audi.com) has removed much of the carmaker’s anonymity, and it could erase the brand’s reputation for producing conservative cars that excel only at being visually boring. The latest variant among Audi’s pride of four A8s, the $92,000 S8 is the screamer of the bunch. Punch comes from the same 450 hp V-10 that powers the Lamborghini Gallardo. The engine gives the car a zero-to-60-mph time of 4.9 seconds and a top speed restricted to 155 mph. Construction is almost all aluminum; the car borrows many performance parts from the Audi racecars that continue to overwhelm all others at Le Mans. With Audi’s Quattro all-wheel-drive system, further traction controls and an adaptive air suspension might seem superfluous, but they are in place nevertheless. Audi coddles you with seats that slide forward and expand thigh and bottom surfaces without producing gaps between the cushions. And the 14-speaker, 1,000-watt sound system from Bang & Olufsen will blow away freckles.

Lexus has gone where no green-car manufacturer has gone before, into whatever marketplace there might be for a large, luxury-stuffed, expensive, and prestigious hybrid. The Lexus LS600hL (www.lexus.com) is a long-wheelbase sedan that performs to the levels of, say, BMW’s 5 Series four-doors or the Mercedes E-Class. The LS600hL has addressed those flaws that have sullied Toyota’s Prius hybrid and Honda’s Insight gasoline-electric since the green and clean compacts tried bringing us to our senses 10 years ago. These hybrids—cramped, tinny, and not particularly fast—are best suited for drivers willing to endure any compromise to save the planet. The $110,000 LS600hL, by contrast, is longer than a full-size luxury car. It has a V-8 engine recharging its battery pack and will reach 140 mph. Both motors at full wail produce a combined total of 438 hp and deliver a zero-to-60-mph time of 5.5 seconds.