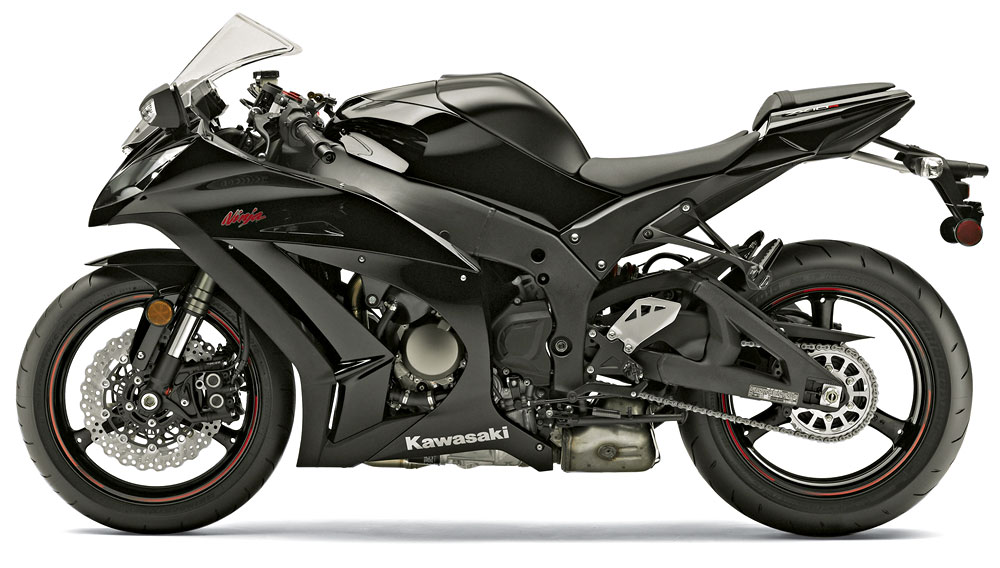 Six years passed between the debut of the Kawasaki Ninja ZX-10R, in 2004, and the super sport’s first comprehensive update. But the improvements were worth the wait. The $13,800 ZX-?10R, which underwent less drastic changes in 2006 and 2008, has new bodywork, a new drivetrain, and a new chassis with a lightweight Showa Big Piston Fork. The bike also is equipped with an Öhlins steering damper to stabilize the front end and a horizontally positioned rear monoshock. While adding these components the ZX-10R has shed nearly 22 pounds, dropping its weight to 437 pounds.

The bike’s’s 998 cc powerplant features a host of upgrades that enable freer-revving power; in European form, the engine churns a breathtaking 197 hp, giving this two-wheeled dynamo a power-to-weight ratio that is superior to that of the BMW S 1000 RR, a fellow liter-class sportbike that was a Robb Report 2010 Best of the Best selection. The U.S. version of the engine, which has to conform to this country’s stricter emissions regulations, is not quite so powerful.

More significant than the bike’s beastly force is the manner in which that power is delivered to the rear wheel; Kawasaki offers a novel means of keeping hair-raising incidents to a minimum. The ZX-10R is equipped with Sport-Kawasaki Traction Con­trol, a system that monitors throttle position, wheel speed, engine rpm, wheel slippage, and acceleration at .005-second intervals to determine how much electronic intervention is necessary—and to deliver it on time. Suffice it to say, the system is advanced enough to mitigate throttle input that might otherwise send a rider tumbling across the tarmac.

The optional $1,000 ABS adds only six pounds to the bike, and unlike conventional antilock systems, it can stabilize rear-wheel hop by reducing front-brake pressure.

The new and improved Ninja ZX-10R has plenty of brawn, but riders will be pleased to discover that it also has a big brain.