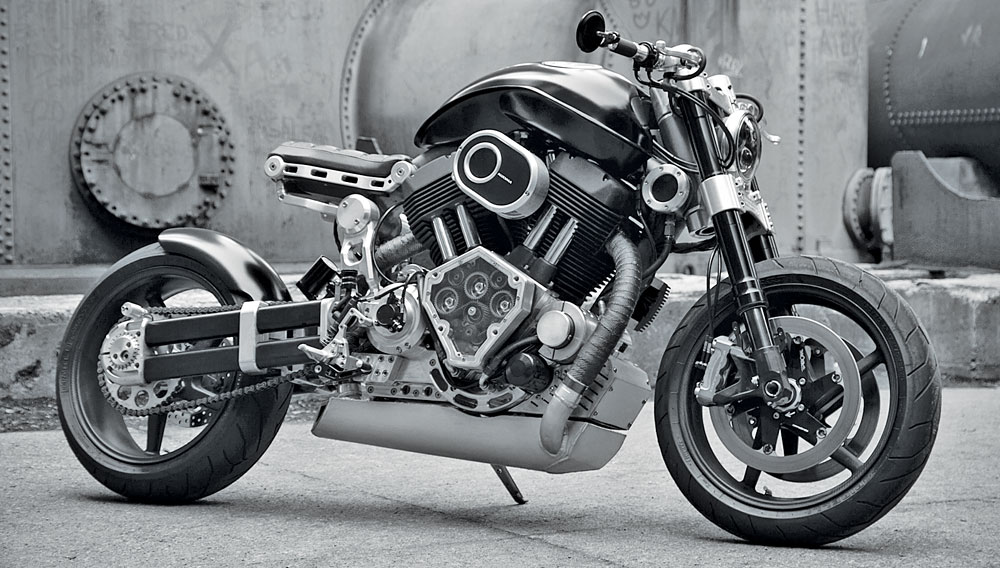 Confederate Motors has been building ambitiously designed, hand-assembled motorcycles since 1991, but for its latest creation, the Birmingham, Ala.–based manufacturer has introduced a new platform that eliminates many of the complicated steps involved with building its earlier bikes. For the new X132 Hellcat, instead of mounting the powerplant onto the frame with bushings, the Confederate crew locks the engine’s CNC-machined case directly to the frame, using it as a stressed member. Confederate, which developed the design over a three-year period with engine builder S&S, calls the architecture “X-Vault.”

X-Vault allows for a stiffer, more direct way to drive power to the rear wheel, resulting in a more responsive ride. Think of the Hellcat as having a design more similar to a racetrack-ready, unibody Porsche 911 than a body-on-frame Ford F-150.

The Hellcat is propelled by a massive 132 cu in (2,163 cc) engine constructed of billet 6061 aircraft-grade aluminum. The mill produces 132 hp and dwarfs some automobiles’ powerplants.

The $54,450 bike displays such exquisite details as stainless-steel bolts and carbon-fiber wheels. Hardware components include a rear Race Tech coil-over, a Marzocchi front suspension, and brakes by Beringer and Brembo.

The X132’s spare industrial-style design is punctuated by sculpted slabs of bare metal and exposed mechanical parts, including the belt-driven cams, which are visible through a clear cover made of machined polycarbonate.

Though the latest Confederate offers a ride that is sportier than its predecessors’, the bike still is better suited to bolting from stoplight to stoplight than competing on a racetrack. Lean, minimal, and beautifully executed, the Hellcat offers a visually and viscerally heady way to get from points A to B.