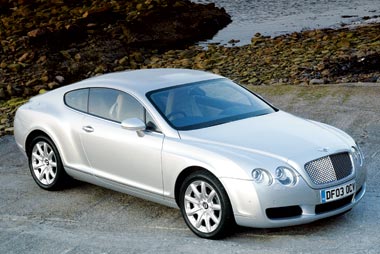 The British heavyweight has earned its worldwide acclaim.

“It may be the best Bentley ever,” declared John Davis, host and executive producer of public television’s MotorWeek. Then he gave the Continental GT his program’s Dream Machine 2004 award.

“It has reinvented the Bentley marque in a forward-looking way,” agreed judges at the British International Motor Show. One might expect the Brits to bless and lather one of their own—especially at a hometown event—but not with the double distinction of Car of the Show and Best Luxury Car.

“No other high-performance vehicle . . . delivers this amount of security at speed and this level of distinction, elegance, and comfort.” So said all of us at Robb Report in February, when we selected the Bentley Continental GT as our Car of the Year for 2004.

The gestalt of such adulation is not difficult to read. Other cars in this class are brilliant here, but just above average there. The interior of one may be majestic but its front end looks as though it belongs on a Peterbilt. Some cars appear so retro that they might well have been resurrected from a cryogenic state. Yet the $150,000 Continental GT is fresh and thoroughly superb, never falling short or hitting long.

The engineering is equally avant-garde, with a monstrous 552 horses developed by a biturbo W-12 engine good for 198 mph. The car scoots from rest to 60 in under 5 seconds, which is the territory where Ferraris play. All of this performance is stuffed inside a coupe that weighs 2½ tons and has four adult-size seats.

But such muscle is a given in a Bentley, which continues to adhere to its mantra of overpowering weight by brute force. Now, there is all-wheel drive for transferring that power to the road, and lots of aluminum panels and braces to reduce weight and increase rigidity. The GT is also equipped with suspension and traction controls that react and adjust more quickly and efficiently to load shifts and surface changes than our reflexes ever could, broad rubber on 19-inch wheels, and huge 16-inch brake rotors that reduce speed more effectively than drag chutes. The transmission is a 6-speed automatic or manual with one of the industry’s smoothest paddle-shifting systems.

A Bentley typically offers exclusivity followed by collectibility, and as the first of the breed to be manufactured by Volkswagen, as the first to transcend being a rebadged Rolls-Royce, as one of the best of a handful of new European brute coupes, and as the first Bentley to be powered by a 12-cylinder engine, the Continental GT certainly is sui generis.

Fix for the Six

If you can live with the fat lip atop the trunk—a designer’s dodge to improve cargo room for groceries, luggage, and sports gear—the BMW 645Ci is a worthy heir to the graceful mode and mood of past and revered 6 Series coupes. It is low in pose and high in performance, with a growl that is pure Talladega.

It is an admirable, fine-handling bridge between BMW’s 5 and 7 Series, although some wish it carried more muscle and did not share the same 325 hp V-8 as the flagship sedan. Still, the $70,000 645Ci is set apart from its siblings by an unfussy appearance that places poise before posture, a high-quality and discreet interior that is fresh for BMW, and ergonomics that are a blessed reprieve from the complexities of the overwrought 745i. All of this suggests that the 645Ci will be remembered as one of the better ideas from BMW.

Just as a brut can be silky smooth, so too can a brute, when it takes the form of the Mercedes-Benz CL65 AMG, a coupe that sports an aggressive yet graceful silhouette and is propelled by a robust 6-liter, twin-turbocharged V-12 engine.

The $170,000 CL65 achieves a tire-chirping zero-to-62 sprint time of 4.4 seconds and an electronically limited top speed of 155 mph. Among machines sporting the grille-mounted three-pointed star, only the outrageous SLR McLaren tops the CL65’s acceleration and 612 hp output. The coupe also makes short work of long and twisty stretches by utilizing AMG’s race-bred suspension tuning and sophisticated electronics such as its Active Body Control (ABC) system. The car’s power and acceleration numbers become even more impressive when you consider that the CL65 is a fully accoutred, 2.5-ton luxury coupe intended not for charging toward the checkered flag, but for racing to early tee times and late dinner reservations.

Ferrari rarely builds anything even slightly off-center, and when it does everything right, the result is a superlative such as the Ferrari 612 Scaglietti coupe. It not only replaces the marque’s 12-year-old 456 2+2, but it just about eclipses all other grand touring cars built during the six decades that the company has been creating icons.

The V-12-powered, 540 hp, 200 mph 612 has been stretched, widened, and heightened to fit four adults and some golf clubs. Ferrari has also looked back at the 456, decided it was too soft, and therefore strengthened the suspension, handling, balance, and performance curve of the $250,000 Scaglietti.

For you incurable romantics, the 612 is named in honor of legendary Ferrari builder/designer Sergio Scaglietti and displays styling cues from a 1954 Ferrari that director Roberto Rossellini ordered for wife Ingrid Bergman. Hence a blue-gray body color for the 612 can be ordered as it was for Bergman. Ah, la dolce vita.