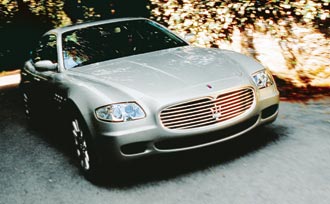 The four-door cruiser represents the final phase of Maserati’s return to dominance.

First into the fray was the 2002 Maserati Spyder, a cute little guy that drove and rode well and brought its sense of mischief to the roadster scene. Then for those into well-arranged hair and more conservative cars came a Maserati with a lid, the equally priced, similarly performing, but slightly slicker-looking Coupé.

Now we have the best of the bunch: the Quattroporte. The $90,000 sedan shouts to the world that Maserati is back and building durable, high-quality, passionate, fast, truly elegant, and thoroughly Italian automobiles. This is what the company was doing in its salad years of the mid-1950s to early ’70s, when the gorgeous 3500 GTs, 5000 GTs, and Ghiblis were the luxury tourers of choice among the casino set who brunched in Portofino.

A Maserati is also what gentle persons of taste drove if that degustation did not quite stretch to a Ferrari. That element has not changed. Even Luca di Montezemolo, the boss of both factories who is credited with elevating Ferraris into friendlier cars and redeeming a future for Maserati, has said that if you do not have enough euros for a Ferrari, consider spending only $100,000 for a Maserati. Not, he is quick to add, that a Maserati is a cheap car. It simply is less expensive because it is produced by the thousands, not the hundreds; because there are fewer man-hours and substantially less handcraftsmanship put into a Maserati; and because it can be built from the bins of hundreds of subcontractors who are already making parts for Ferraris.

None of the aforementioned facts dull the racer’s edge of a Quattroporte or diminish the adventure of having 400 horsepower under your right foot and the promise of 170 mph from an incredibly flexible, well-polished V-8. Plus, the Quattroporte is equipped with all the traction, braking, steering, and balancing controls demanded in today’s quality automobiles. Let us also not ignore a 6-speed transmission with paddle shifting, and the attention given to widening and flattening the body and chassis for finite adhesion under duress.

This modern and innovative Maserati comes with a list of luxuries longer than anything stuck to the window of a Lexus. There are reclining and heated rear seats, a Bose sound system, a total of 4 million combinations of colors and materials (according to Maserati, and we didn’t check the math), and even a limousine package that includes massagers built into the seats and picnic trays mounted in the seat backs. Do not be surprised if the second generation of creature comforts includes an espresso machine that plugs into an auxiliary power outlet.

The distinguishing feature of this car, however, is its appearance. Its large, broad grille references the carmaker’s past and serves as the background for Maserati’s famed trident, which is mounted, obviously and audaciously, in the center of the horizontal bars. More contemporary style elements are apparent in a silhouette that is low, smooth, exquisitely proportioned, and quite beautiful, indicating that only Italians really understand how to translate an owner’s mood into automotive shape.

The Jaguar XJR is powered by the same 390 hp engine as the XKR coupe (and the convertible), and it is 13 inches longer. But compared with the stately XKR, the sedan drives like a supercharged hot rod. The difference lies in their weights; the XJR is 94 pounds lighter, which is enough to give it a 0.3-second advantage in the zero-to-60 dash. However, even during a casual drive, the difference in the two cars is obvious.

While other hard-charging, high-powered vehicles can feel hefty on back roads, the athletic, $75,995 XJR, thanks to Jaguar’s liberal use of aluminum in its construction, dances around turns and scoots like a smaller, sportier machine. Jaguar continues its tradition of creating clubby interiors by incorporating generous amounts of wood and leather into the XJR’s spacious cabin. The exterior, aside from some subtle freshening, retains the sedan’s signature low-slung profile.

In today’s crowded concours of 8-cylinder executive sedans, the vanilla exterior of the $55,000 Lexus LS430 does nothing to distinguish the Japanese flagship from its more sensually sculpted competitors. However, spend a few moments inside the car enjoying its driver-friendly interior and smooth-as-cream drive, and doubtless you will agree that the LS430 is an attractive alternative to some of its more expensive running mates.

Every button on the dashboard is large and clearly marked, while the touchscreen display, which, among other functions, controls the radio and the navigation system, is simple enough for a child to operate; no intricate procedure is necessary for changing CDs or turning up the heat. A similar design philosophy is evident in the LS430’s driving manners: no frills, easy to control, and close to perfection. On back roads, the 290 hp LS430 pulls and glides effortlessly, and the cabin, which is as quiet as a library, barely quivers on highways. Instead, it is the competition that is shaking.

Beast and a Beauty

The Audi A8L performs every task asked of a premier executive sedan: It hustles on the highway, projects a commanding presence on all roads, and offers a quiet, comfortable, and roomy cabin. However, unlike most four-door flagships, the $69,220 German cruiser does not only purr; it growls. The high-revving A8L’s rowdy exhaust note—along with its Sport suspension, which features a stiffer setup than the Comfort mode—accurately indicates that the Audi has been designed for spirited driving.

Although the Audi drives like a much smaller car, only the Maybach 62 has a more spacious backseat. Here, passengers can enjoy the 12-speaker Bose system and pillow-soft ride, but without question the best position from which to enjoy the Audi is behind the wheel.

Over the last few years, Cadillac has transformed its lineup with a series of outstanding automobiles that unfortunately bear forgettable names such as XLR, SRX, and CTS—arrangements of letters that may sound good but do not stand for anything. The launch of the Cadillac CTS-V, however, introduces enthusiasts to a significant suffix that will carry plenty of meaning in Cadillac’s universe; the italicized V indicates performance levels that will challenge those of Teutonic hot rods badged with letters such as AMG, M, and S.

With the CTS-V, Cadillac has assembled a 400 hp version of Corvette’s 5.7-liter V-8, 18-inch wheels, Brembo brakes, and a host of race-bred niceties specified during the car’s development at Germany’s Nürburgring racetrack. Cadillac claims a zero-to-60 time of 4.6 seconds and a top speed of 163 mph. The stunning CTS-V is available in only silver or black, and a sunroof is the $50,000 car’s sole option.