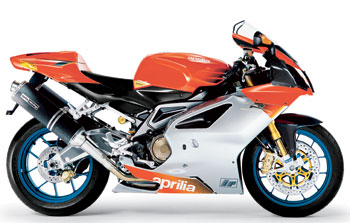 Ironically, for all the innovations aboard the Aprilia RSV 1000R Factory that aid and abet the fast-forward progress of the $18,000 Italian motorcycle, it is the mechanism that brings the bike to a halt that best reveals its essence of pure speed. Aprilia fitted the 139 hp bike with a radial-clamp front-braking system developed with Brembo that instantly stops the Factory in its tracks. Such technology is a good thing for its riders given the prodigious—and potentially hazardous—power of the high-strung, low-weight motorcycle from Noale, Italy.

The Brembo system offers several benefits. First, the Factory’s brakes are more responsive than those on the base 1000R model, as the slightest squeeze from your fingertips will slow the bike. Also, the radial-mounting system provides better alignment, which promotes even surface wear and extends the lives of the brake pads. Considering the speeds that Aprilia estimates its Factory riders will be approaching, long-lasting brake pads will be essential.

The brakes complement the numerous features that make the Factory so superior on the track. Among these is what Aprilia calls the Air Runner, a wide-gaping air scoop located in the bike’s windscreen. The scoop forces more air into the dohc V60 Magnesium engine, giving the motorcycle a peak output of 79 ft lbs of torque at 7,500 rpm and 3 percent greater power than its predecessor. A choke inside the duct regulates the amount of air that is fed into the engine. The Air Runner also increases the stability of the bike, but the most significant contributor to the Factory’s buttery handling is its Öhlins suspension system. At the front of the Aprilia, a fully adjustable fork has been designed to reduce load, and the rear shock absorber can be adjusted to accommodate different racetracks or the preferences of different riders. Knee pucks might graze the ground in the tightest of turns, but riders will never lose control of the Factory thanks to the high-tech Öhlins suspension.

Besides state-of-the-art technology, one of the simplest ways for an object to increase its speed is to shed some weight, and the Factory has gone on the motorcycling version of the South Beach Diet to complete its mission. The mudguards, fairings, and windscreen deflectors are made of lightweight carbon fiber; the headstock shaft of the bike is made of aluminum instead of steel; and the wheels are forged of aluminum using a proprietary casting method that makes them 25 percent lighter than many other wheels. However, the Factory’s slim stature belies its standing as a superbike heavyweight.

Some MV Agusta enthusiasts purchase the highly exclusive machines and put them in their garages only to appreciate the sculpture of the Italian bikes, choosing never to put a single mile on their prizes. Such admiration would be appropriately directed at the MV Agusta Brutale S, which, with its naked design, invites the eye to study its mechanical tapestry. However, its capabilities suggest that this is a bike meant to be ridden.

The $13,995 Brutale S is not a motorcycle tuned for the racetrack, but it still excels in high-speed runs on regular roads. Its gas-guzzling engine puts out 105 hp and 50 ft lbs of torque at 10,700 rpm, enabling the bike to top out at 144 mph. The rigid front end and precise steering complement the powerful engine, making the Brutale S relatively easy to handle.

Par for the Corsa

While some machines look better than they perform (and vice versa), this cannot be said of the Moto Guzzi MGS/01 Corsa, which marries exquisite form with precise function. In 2002, Moto Guzzi specialist shop Ghezzi-Brian was commissioned by the manufacturer to design the motorcycle and was given less than nine months to complete the project. The MGS/01 Corsa belies the company’s haste.

A sleek, taut, one-piece carbon fiber body encases hardware that will impress any Italian exotic enthusiast: Öhlins suspension, Brembo brakes, an LCD display with a digital tachometer, and a 1,225 cc V-twin that produces 122 hp and 83 ft lbs of torque at 6,400 rpm. Such power makes the bike a force at the track, although owners will undoubtedly take theirs to the streets as well. The bike is expected to cost more than $20,000 and will have a limited production run.

To accompany last year’s American debut of the popular European BoxerCup race series, BMW introduced the BMW R1100S BoxerCup Replika, a limited edition version of the R1100S. Like the stock model, the Replika is powered by a 1,085 cc twin-cylinder engine that develops 98 hp and 70 ft lbs of torque at 5,750 rpm.

However, BMW has included several features that will make the $14,400 Replika particularly appealing to collectors and other enthusiasts. Each Replika is fitted with a carbon fiber spoiler and cylinder head covers, a fatter rear wheel like those on the BoxerCup series bikes, and a certificate of authenticity that proves it is one of only 300 machines shipped to the United States this year.