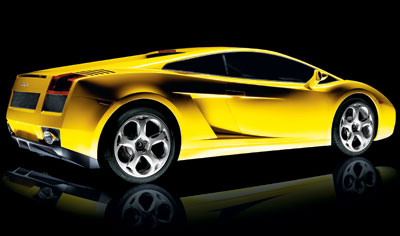 The 10-cylinder rocket scores a perfect 10.

It was just a matter of time until the other Italian supermarque hit a home run. Lamborghini’s new sports car is extreme but friendly, uncompromising but comfortable, and an absolutely effortless blast to drive. There is no contradiction of terms here: The Gallardo blends seemingly disparate attributes and comes out on top as the best sports car of 2004 for reasons having to do with more than good looks alone.

But first things first. The gorgeous Giugiaro-inspired shape is fresh and unlike any other, with clarity of line and freedom from embellishment that suggest this car was made by designers for designers. Having escaped any dumbing down by focus groups and meddling brand managers, the Gallardo emerged a styling triumph that, while referencing the larger Murciélago, is smaller in scale and appears more balanced from every angle. Its smaller size makes the Gallardo easier to use on real-world roads, while conventional doors—rather than unwieldy scissor-style contraptions—allow normal ingress/egress. And once inside, even tall drivers can function with relative ease.

Creature comforts abound, thanks to Audi-influenced ergonomics, with fit and finish—inside and out—that reflect high German standards. Picky types should note that this car exhibits build quality unknown in previous Lamborghinis, which, like so many Italian and British exotics, have shown abysmal attention to details large and small. But the infusion of Audi sensibilities (read: dollars) has in no way made the Gallardo less exciting than its forebears. In fact, this entry-level exotic, priced at a $100,000-plus premium compared to its V-12 brother, is probably the best Lamborghini ever. Just as the 350GT, Miura, and Countach did in their respective eras, the Gallardo ups the supercar ante today.

Which brings us to performance. Lots of it. Mechanically minded sorts will appreciate that this is Lamborghini’s first foray into V-10 territory, with Junior Gallardo giving a nod to Senior Murciélago’s larger V-12. The all-new powerplant displaces 5 liters and produces 493 hp at a sweet-sounding 7,800 rpm, with plenty of flexible torque peaking at 376 ft lbs at 4,500 rpm. Placed longitudinally amidships and driving all four wheels, this user-friendly motor does its thing without the pyrotechnics of turbos or a finicky powerband that makes extracting performance a chore.

At almost 3,200 pounds, the Gallardo is more flickable than its weight suggests, with handling that is surefooted and beautifully neutral but hardly unexciting. Less-than-expert drivers can have fun in great measure; those more talented will be rewarded further still. The 6-speed manual gearbox is the transmission of choice, though the corporate spiel (from every manufacturer who offers one, it seems) suggests that the electronic paddle shift—Lamborghini calls its version e-Drive—is better. Trust us, it’s not, unless you spend many hours parked as a rush-hour sardine.

What really sets the Gallardo apart is the value it represents when compared with the highest-end sports cars; $166,000 ensures a competently engineered, cutting-edge design, wrapped in a beautiful package that is rare in numbers but absolutely practical to drive every day. It is a formula that spells Best of the Best in anyone’s book.

Civility is not a hallmark of the Porsche 911 GT3. The vehicle emits a head-pounding snarl, jiggles over rough pavement, and spins its rear end with the slightest tap on the accelerator. However, for Porsche enthusiasts, the brisk and brash GT3 embodies the essence of sport-tuned etiquette. The 911 Turbo Cabriolet offers easy-to-wield power and elegance in an everyday package, while the Carrera GT is a racer’s dream car. The GT3 captures elements of both machines: It demands precision from its driver, yet it is practical enough, despite its heavy clutch and stiff chassis, to endure daily commutes.

Ill-prepared hands may not appreciate the GT3’s brusque disposition. The car is raw, rough, and unsympathetic to unsuspecting drivers. But for pilots equipped to handle the GT3’s naturally aspirated 380 hp engine, blade-sharp handling, and brakes that are larger than the Turbo Cab’s stoppers, a well-executed jaunt on a track or curvy road will establish the excellence of the $100,000 howler.

From a purely objective viewpoint, the Porsche Carrera GT is unquestionably the best new sports car of 2004. The designers at Porsche have developed what is essentially a racecar’s chassis and drivetrain and adapted the whole package to the street, improving ergonomics along the way and fashioning beautiful, production-car bodywork to clinch the deal. Anyone serious about cars would give all that is holy—or $440,000, at least—to have a GT occupy space in his garage.

That said, this is a special car for special outings, and not the kind of vehicle that will likely see use as a daily driver. Not that it couldn’t be pressed into such service, but the noisy clutch, wickedly expensive composite bodywork, and singularity of purpose—having fun while going fast—mean that the Carrera GT will likely rub shoulders with a more practical stablemate or two from Germany, Italy, or Great Britain. Then again, diehards may disagree.

It comes as no surprise that Porsche has scored a hat trick in this year’s Best of the Best. Each of the three cars from the stoic Swabians is not only excellent, it is completely different from the others. But the Porsche 911 Turbo Cabriolet will no doubt have the greatest appeal. Following a 15-year hiatus, the classic Turbo convertible returns, which is welcome news for Porsche drop-top lovers who want an additional helping of horsepower along with the extra sunshine.

This car marries ease of driving with unmatched performance in a way that—underpinnings and looks notwithstanding—makes it anything but exotic. And that is a good thing for enthusiasts who want to drive a near-supercar every day of the week without eschewing the practicality of rear seats, a modicum of luggage space, and luxury amenities. With the top up—or optional hard top installed—the Turbo Cab is as quiet as a coupe, making it the perfect year-round sports car.

“Too bad it’s so rainy today,” says an obviously disappointed Primo Goffi, the product and business planning specialist for the $140,000 Ford GT. “Otherwise I’d have you losing your lunch.”

For this reason alone, I am grateful for the raindrops falling on the 1.1-mile track at the Dearborn Proving Ground’s Product Review Center, where Goffi is piloting the 550 hp Ford. The damp conditions compel Goffi to keep the GT’s speed well below its normal threshold, yet the sleek and sexy supercar still sizzles in its sprint around the circuit. On the straights, the supercharged engine screams as the tachometer needle shoots to the redline, and then the tires squirm and squeal as the GT twirls into a turn, its back end sliding across the slick track.

By the end of the run, the black-and-silver GT is coated with mud from splashing through the puddles on the track. However, the beauty of the 44-inch-tall retro rocket shines through the layer of muck and settles the slight queasiness that Goffi’s driving, despite his promise, has managed to provoke.

Mercedes-Benz and Formula One partner McLaren have delivered the ultimate automotive paradox: the Mercedes-Benz SLR McLaren, a racecar for the street. In the luxuriously appointed carbon fiber SLR, you can do laps around Daytona or cruise along Rodeo Drive in comfort, safety, and style.

While I cannot personally verify the 207 mph top speed, I can confirm the addictive quality of the rumble that bellows from the side pipes and the shriek of the supercharger—especially when the AMG-built, 617 hp V-8 is pinning you to the seat during a 3.8-second zero-to-60 sprint.

The SLR’s styling receives high marks for blending functionality with references to Mercedes’ racing heritage and modern-day F/1 brilliance. The long arrowlike prow emulates the nose of the current McLaren grand prix car, allowing the engine to sit amidships for optimum handling balance. A large rear deck spoiler emerges to assist braking, much like the one on the 300SLR of the 1950s. At more than $400,000, the SLR is pricey, but you come away from the acquisition with a racecar, historic collectible, and high-tech luxury machine all in one.

Up for the Challenge

Imagine scurrying along a Midtown Manhattan sidewalk to a meeting and suddenly transforming into an NFL running back, cutting and weaving through the pedestrian parade as if it were standing still. That’s how it feels to drive the Ferrari Challenge Stradale in normal traffic.

The $190,000 Stradale is Ferrari’s most agile product. By putting the 360 Modena on a titanium and carbon fiber diet, adding downforce, and fitting the coupe with carbon ceramic brakes, the Maranello crew has created a lightweight contender that blasts from zero to 62 mph in 4.1 seconds and handles as though it were on rails. A moderately skilled driver can do astounding things with this car.

Then there is the noise. The powerplant of the previous-generation 355 is more operatic, but the hard-edged intensity of the Stradale’s V-8 at full song is a sound that will linger in a driver’s subconscious long after the vehicle has been parked for a well-deserved rest.