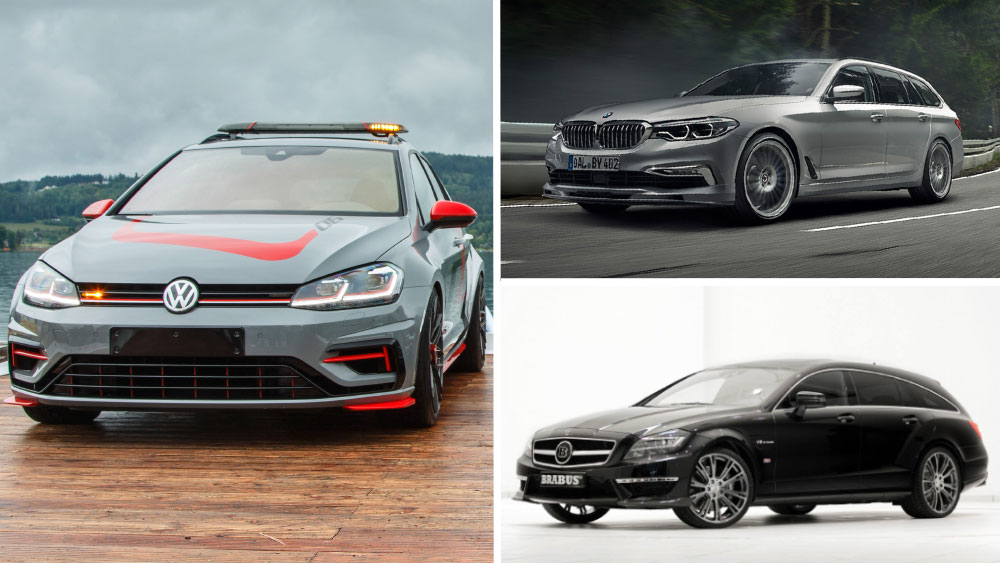 While Americans keep swooning for crossovers, the US’s best-selling vehicle body style, the decay of the sedan has seen another style bourgeon in its wake: the station wagon, or “estate” as it’s known elsewhere around the world. Over the past five years, wagons have seen 29 percent growth, with nearly a quarter-million wagons sold in 2018 alone, per a Bloomberg report. Despite impressive double-digit growth, long-roofs only represent about two percent of the total vehicle sales in the US, but it’s a promising start, one that’s growing every day: Audi recently began US sales of the forbidden fruit that is the marvelous RS6 Avant, as noted below.

Gone are the wagons of yesteryear, though the childhood memories remain. (Like those of the Griswolds on family vacations, ambling through the idyllic countryside in a Wagon Queen Family Truckster that was actually a 1979 Ford Country Squire LTD, modded by the film studio). Today’s wagons are anything but underpowered steel slouches. They’re powerful, dynamic family haulers; grocery-getters capable of destroying the groceries on the way home. Here’s hoping the market segment keeps blooming so we’re treated to a wider array of potent options. Below, 13 of our favorite fastest and most powerful wagons.

Back in 2010, General Motors debuted the Cadillac CTS-V Wagon, which proudly still holds the title of most powerful production wagon ever offered with a manual transmission. The whole V-series was decadently insane, in terms of performance and spec numbers, and the CTS-V Wagon was the chef’s kiss of the supercharged family. Under the bonnet was GM’s LSA V-8, a 6.2-liter mill that was derived from the C6 Corvette ZR1’s LS9. That’s good for 556 horsepower and 551 pound-feet of twist, all funneled to the rear wheels via a Tremec six-speed manual (or an automatic with paddle shifters). If you haven’t had the pleasure of flogging a Corvette-powered Caddy wagon, allow us to inform you it’s a sheer hoot. You’ll cackle during the four seconds required to rip to 60, and then howl maniacally if you’ve got the runway and cojones to continue on to the max speed of 190 mph. Alas, the V Wagon production shuttered in 2014, so if you can find one for sale, buy it immediately. Future collector’s item, right there.

The Panamera’s exterior design was a mite polarizing when it first emerged, but no one can argue with the venerable performance of the Turbo S E-Hybrid Sport Turismo, a name nearly as long as the 16.5-foot wagon. There’s a twin-turbocharged 4.0-liter V-8, which is rated to 550-horsepower, but that’s augmented by a 136-hp electric motor for a total output of 686 ponies, and 626 lb-ft of torque. It takes a mere 3.2 seconds to hit 60, especially in Sport Chrono mode. The top speed is 192 mph, but this kind of performance doesn’t come cheap. Expect a sticker price well into the six-figures, if you want it fully loaded.

Das verboten German fruit. You could only buy an Audi Avant in Europe, until now. Audi’s pledged to bring its wagons west, including the RS6 Avant Performance, which takes Audi’s impeccable 4.0-liter twin-turbo V-8, rated to 556-hp, and tacks on another 50 ponies to get you to 605 horsepower. Now Audi’s redoing that powertrain, and ratcheting the power up to proper supercar levels, around 650 to 700, especially when you consider that Audi and Porsche are both VW Automotive Group brands, and a hybridized system similar to the Panamera Turbo S E-Hybrid could be similarly deployed in the RS6 Avant Performance.

One of our favorite Tri-Stars has to be the E 63 S wagon, which becomes a proper sleeper when de-badged. Only the snarl of the 4.0-liter twin-turbo V-8 will give away that this wagon’s packing 603 horsepower and 627 lb-ft of yank. While all-wheel-drive is a Mercedes-Benz standard, the folks at AMG kindly separated the front axle from the rear in certain drive modes to enable massive, smoke-filled drifts. (Why yes, this wagon does have Drift Mode.) You don’t need a wagon that has a Race Mode and Race Start, but you’ll spend a substantial amount of time toying with those features. Have fun terrifying the family by lighting ‘em up off the line and shredding to 60 in 3 seconds flat.

The British call wagons estates because they were ideal for puttering around one’s vast expanse of land. The Jaguar XF S Sportbrake is more likely to tear up the English countryside than ferry a pack of hunting dogs and the lads around, and that’s the way we like it. Its supercharged V-6 is good for 380 horsepower, and the drivetrain hails from an iteration of the F-Type S. Brake-based torque vectoring helps the hefty Sportbrake stay upon the line you place it, and all-wheel-drive keeps you moving regardless of terrain conditions.

If you took the Chrysler 300 sedan and stretched it, you’d have the Dodge Magnum. Both were underpinned by the rear-wheel-drive LX platform, and when the Magnum went on sale in Europe, it actually was called the 300 Wagon. When it debuted in 2005, it was kitted out with a 5.7-liter Hemi and optional all-wheel-drive, but the peak Magnum years were from 2006 through 2008, when the SRT8 variant was offered. Those Magnums had 425 horses under the bonnet and had lowered and stiffer suspensions, and performance tires. Pour one out for the Magnum, as the line shuttered in 2008. Imagine if this thing had stuck around long enough for FCA to shoehorn a Hellcat engine in the bay?

After the Swedish announced plans to elevate the Polestar performance tuning division into a stand-alone EV company, maybe you were worried it would cease transforming Volvo wagons into hot rods. Think again. The handsome and menacing 2020 V60 wagon eschews pure combustion and melds in electric motors, batteries and EV technology to assist its stalwart twin-induction 2.0-liter inline four-cylinder. In concert, 415 horsepower and 494 lb-ft of yank are on tap, and it’ll rip to 60 in 4.4 seconds and scramble through the quarter in 12.9 seconds. Not shabby, given its 2.2-ton girth.

Saab began making fighter jets around the same time it started mass-making cars. Despite good ideas and sound design, the latter endeavor didn’t go well, and General Motors swooped in and bought half of Saab Automotive. A bright spot that emerged post-merger? The 9-3 Turbo X, specifically the SportCombi, Saab’s funky name for the rarest wagon variant, of which fewer than 150 made it to America. A turbocharged V-6 sent 280 horsepower and 295 lb-ft of torque through all four wheels. While it may not have melt-your-face-speed (cresting 60 mph takes about 6 seconds) it had plenty of pep back in 2008 when it debuted.

Americans do get offered a VW Golf wagon, but our all-wheel estate version isn’t offered in the R performance spec, thus topping out at around 145 horsepower. From afar, we must admire Wolfsburg’s Golf R wagon, capable of unpacking 290 horsepower from a 2-liter turbo, all gussied up with carbon fiber and aggressive body styling. Now the Germans dropped the Golf Estate R FighteR. How about 395 horsepower and a widebody kit that adds 2.3 inches to the beam? The additional lights are for safety car duty at German’s Sachsenring circuit where it undoubtedly turns a spirited lap.

Meet Audi’s first RS machine, the RS2 Avant. A joint production with Porsche and Audi AG, this limited-edition super wagon was only built for about 16 months in the mid-Nineties. It employed a modded version of Audi’s 2.2-liter turbocharged inline-five mill that saw peak power reach 311 horsepower and 302 lb-ft of torque. Among the tweaks, Porsche swapped in a larger turbo, intercooler, higher flow injectors, and a low-pressure exhaust. The RS2 required a mere 4.8 seconds to hit 60, impressive given its 3,500-lb curb weight. After repeated testing, its acceleration was found to be on par with a McLaren F1 road car (0-30 mph), and later with a C5 Chevrolet Corvette and a 996 Porsche 911.

If you’re wondering what a wood-paneled wagon is doing on this list, this sleeper is anything but stock. While the 1994 woody came with a 5.7-liter V-8, it was detuned down to about 250 horses. That wasn’t nearly enough for actor and new Top Gear America host Dax Shepard. “I looked for a year for [this very car],” Shepard told MotorTrend. “When my wife got pregnant, I was like I’m going to get a B-body station wagon between ’94 and ’96, because if I’m going to be a dad, I don’t want to be in a minivan. I want something I can drift.” What a hero. Shepard dropped in a 6.2-liter supercharged LSA crate engine, which now gives him more than 550 horsepower, added a MagnaFlow exhaust, upgraded the brakes to Wilwood stoppers, and swapped in a coilover suspension along with larger front and rear anti-roll bars to help get the Roadmaster around corners. “That car is a 10,” Shepard says. Listen to it growl in this video from MagnaFlow, and check out Shepard drag racing Jay Leno over here.

What happens when you take a BMW 5 Series Touring and cram it with a heap of performance upgrades until the watchful eye of Alpina engineers? You get an elongated Bimmer with a 4.4-liter V-8 twin-turbo that can hit 200 mph (something only one other wagon on this list can boast). The factory-built B5 features 608 horsepower and scrambles to 60 in 3.7 seconds, letting you troll any Mercedes, Porsche, or Audi you may find trying to keep up. As if all that speedy goodness isn’t enough, you also get a factory warranty.

German tuners Brabus unleashed this monster back in 2013, back when the Mercedes-Benz E63 wagon was pumping out an admirable 550-horsepower from a 5.5-liter twin-turbo V-8. That wasn’t sufficient for Brabus, who promptly shoehorned another 300 ponies in after increasing the displacement to 5.9-liters, then re-optimizing and upgrading many of the mechanicals. The resulting wagon is so powerful, only 848 of the 1,069 lb-ft of torque produced is usable, due to powertrain longevity issues. The 850 can go from 0 to 60 in 3.1 seconds and hit 217 miles an hour, but you’ll need to upgrade your tires first, as the stock ones are only rated to 186 mph.