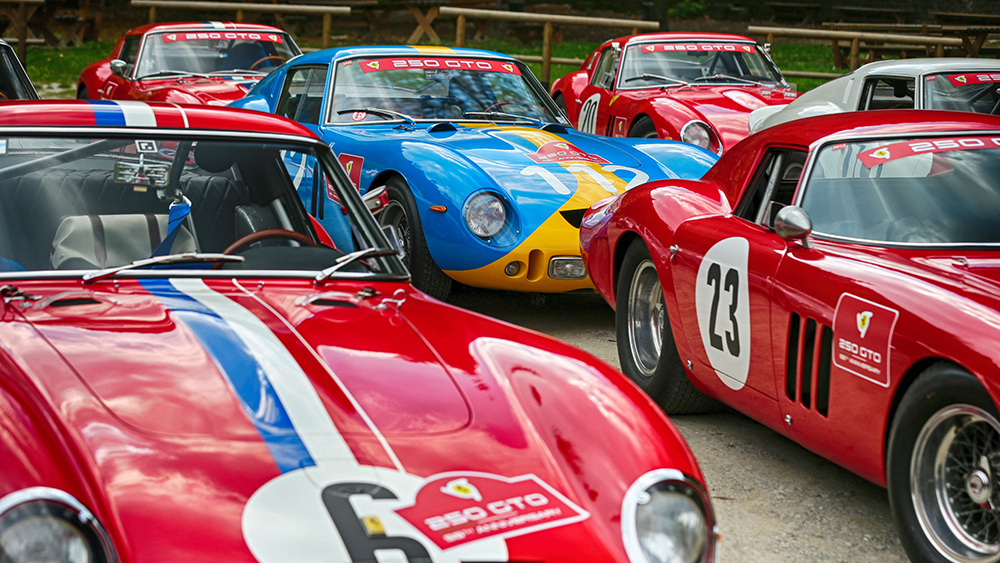 There’s a reason you wanted to hang a Ferrari poster on your wall as a kid. The magnificent steeds hailing from Maranello are as achingly beautiful as they are potent. While scores of models have rolled off the production line after Enzo Ferrari started it up in the 1940s, a handful of Prancing Horses have emerged as the crème de la crème. Here are seven of our favorite Ferraris, all made before 1990.

After Ferruccio Lamborghini unveiled the Miura to a stunned world, Ferrari quickly went into overdrive to create an adequate response to the world’s first supercar. But Maranello wasn’t content to create a copycat of the mid-engined Miura. A glance at that elongated GT’s bonnet shows you that Ferrari wasn’t about to budge from its front-engined, rear-drive layout. A whopper of a V-12 helped the 365 dominate in the 1967 24 Hours of Daytona, finishing 1-2-3 and bestowing it with its informal moniker that’s held to this day. While 1,200 examples were made, that high volume (by Ferrari’s standards) hasn’t lessened the Daytona coupe’s value. Be prepared to pony up at least $700,000 to acquire one.

GTO stands for Gran Turismo Omologato, with that last word translating to “homologation.” This road car with racetrack roots emerged as a shot across the bow of Jaguar after its comely E-type was unveiled at the 1961 Geneva Motor show. It was evolved from the 250 SWB by engineer Giotto Bizzarrini who strengthened the chassis and tweaked the 3.0-liter 12-cylinder to crest 300 hp. It was also imbued with a 170 mph top speed. Only 39 examples of the 250 GTO were produced (between 1962 and 1964), and each sale had to be personally vetted by Enzo Ferrari. It’s now considered to be the most valuable car of all time after a 1963 GTO sold for $70 million last summer.

Behold the last Ferrari with which Enzo Ferrari was personally involved. The road-legal race car had 470 horses and a turbocharged V-8 that made it the first Ferrari to exceed 200 mph back when it debuted in 1987. The bodywork came from coachbuilders Pininfarina, and in an effort to save as much weight as possible, so little paint was used that you can see the carbon/Kevlar weave. The impetus of the car was Enzo requesting that his team make the “best car on the face of the earth,” one that’s not built for comfort but for sheer speed and performance. The unflinching F40 accomplished all of Enzo’s objectives.

Ferrari built 272 examples of the 288 GTO (between 1984 and 1987) when the marque wanted to enter a new category of racing, the Group B Circuit Race series. The basis for the 288 was the 308 GTB (Magnum P.I.’s wheels, for the uninitiated) and the 288 received a 400 hp, turbocharged V-8 that was a pure monster. The race series never materialized, so all 272 units only saw road use. All but one left Maranello clad in Ferrari red paint, while the outlier was painted black. Since it sat atop the Ferrari range, it’s a proper Ferrari supercar. And a rare one. For collectors looking to complete the Ferrari supercar set—288 GTO, F40, F50, Enzo and LaFerrari—this model’s limited production run means it’ll be the most challenging to acquire.

Does the Dino 246 bear the word “Ferrari” anywhere on it? No. Does that mean it’s not a Ferrari? No. Enzo’s late son, Alfredo “Dino” Ferrari, was tapped to create a lower-priced, more attainable sports car, with a 2.0-liter V-6, but didn’t want to tarnish or diminish the Ferrari brand name. A Pininfarina design was built by Scaglietti and this bears the honor of being the first mid-engined Ferrari. Its power-train layout would go on to become the norm for Maranello. Still, Enzo didn’t like that it only boasted six-cylinders, so he withheld his name from the machine. Regardless, it’s one of the most beautiful Ferraris.

Is this the most beautiful Ferrari? Only four examples of the 330 P4 were produced, in rebuttal to Ford’s GT40 showing up on the endurance circuit and trouncing Ferrari. After a full podium sweep by the Blue Oval at the 24 Hours of Le Mans in 1966, Enzo’s directive to chief engineer Mauro Forghiere was blunt: “Win.” Built in 1967, the 330 P4 featured a 450 hp V-12. Three cars were fabricated from scratch while the fourth was made from an ex P3 chassis. The efforts were successful and the 330 P4 snagged a 1-2 finish at Monza in 1967, followed by a second and third place finish at Le Mans (Ford squeaked out a victory in a GT40), and then took 1-2-3 in the 24 Hours of Daytona in 1967. One of the P4s was scrapped by the factory due to an accident at Le Mans, while the other three live on in Germany, France and Canada.