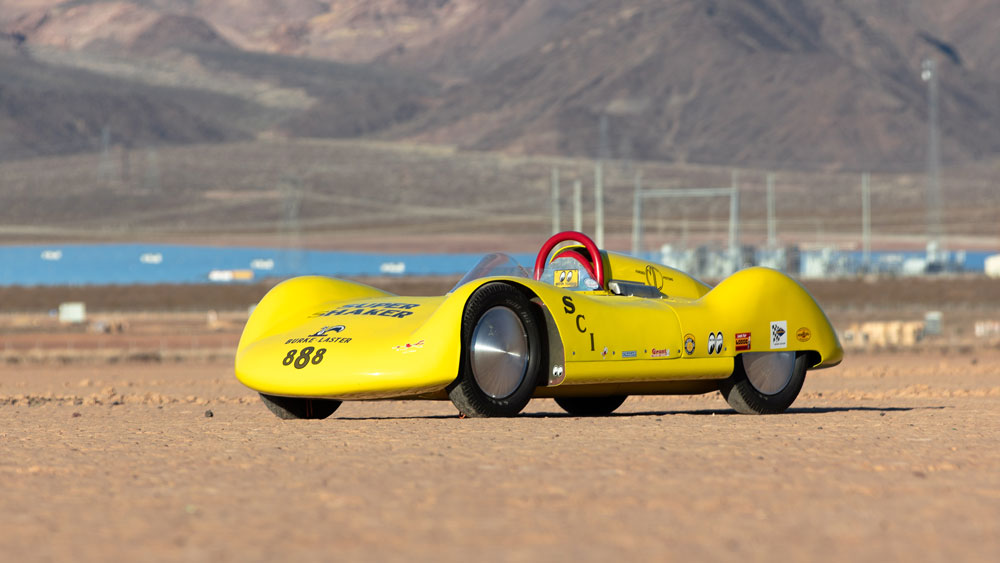 Talk to any land speed racer and you’ll quickly understand the appeal of the pursuit. Records that are set on the salt flats, dry lakes, and the hard-packed sand beaches around the world represent more than velocity; they stand for and celebrate the tenacity, ingenuity, and creative spirit that fuel these speed demons. It’s not enough simply to go fast; the goal is always to go faster than you did the run before and—if you’re lucky—to one day go faster than anyone else ever has.

Those who have chased down such a pursuit understand that the real prize is not just the record but the entire journey that is required in setting it. It’s arriving at the accomplishment—after plodding through the trial and error—that resonates and compels the speed-hungry racers to recommit themselves to another journey immediately after the last one has ended. That was the life that Bill Burke enthusiastically embraced. One part of his legacy will cross the Mecum Auctions block in Phoenix next week—Burke’s Super Shaker road rocket from 1959. But first, some backstory.

In 1937, 19-year-old Burke built his first hot rod from a 1929 Ford, and quickly supplanted it with his first racer, a modified Model T roadster powered by a Model B flathead-4 engine. Behind the wheel of that second vehicle, Burke drove to a top speed of 110 mph, becoming one of the first Southern California Timing Association members to eclipse 100 mph on the dry lakes.

During World War II, while serving in the Coast Guard, Burke had an epiphany. He realized that the fuel tank of a fighter plane could be “a crazy body for a streamliner,” and following the end of the war he set out to build one. Utilizing a 165-gallon tank from a P-51 Mustang, a Model T frame, and a 1935 Ford flathead V-8 engine, Burke’s first streamliner attempt reached a top speed of 137 mph—an impressive number given the vehicle’s aerodynamic inefficiencies.

Burke’s second attempt incorporated a larger tank from a P-38 Lightning and a reconfigured layout that put the driver in the front and the driveline in the rear. With aerodynamics now on his side, Burke set multiple records in the streamliner, eventually reaching a top speed of 164 mph. In the process, Hot Rod magazine dubbed his creation the “World’s Fastest Hot Rod.”

Although he worked full time as the latter publication’s advertising manager, Burke’s success on the dry lakes and at Bonneville’s salt flats led to a side business building belly tankers for his fellow racers. Always the innovator, Burke shifted gears for his own land speed vehicles and began experimenting with fiberglass. By 1959 he was ready to debut a new record-seeker, a compact and lightweight lakester built on a simple tube frame with fiberglass bodywork that was cast from a Cooper sports car. The vehicle has an 84-inch wheelbase with 42-inch treads and it was powered by a Harley-Davidson Knucklehead V-twin. Burke affectionately named the car the Super Shaker.

The Super Shaker has an 84-inch wheelbase.  Photo: Courtesy of Mecum Auctions.

During the Bonneville Speed Trials that year, he piloted the Super Shaker to a top speed of 151.38 mph, which inspired a number of magazine cover appearances, including Hot Rod and Rod & Custom. More recently, the Super Shaker enjoyed a comprehensive restoration, one that equipped the car with a new Harley-Davidson Knucklehead V-Twin built to the vehicle’s original specifications. The car could sell for as much as $200,000 through Mecum Auctions.