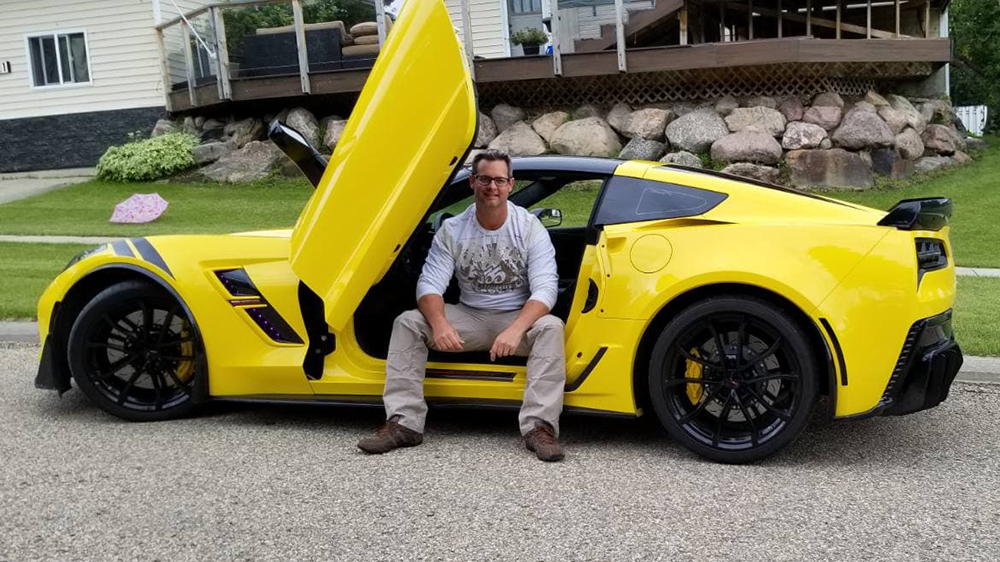 There was once darkness, but now there is speed. After a blind Canadian man miraculously regained his vision, he immediately did what any red-blooded man would: bought himself a gutsy V8-powered sports car.

Mike Schickerowski from Benalto, Alberta, was born with an eye condition known as nystagmus that rendered him legally blind and unable to drive. Until recently, curing the condition, which basically involves the involuntary movement of your eyes, was considered impossible.

Still, the resilient 44-year-old decided to sign up for experimental surgery at a clinic in California, and, fortunately, the procedure was a resounding success. To celebrate, Schickerowski splashed out on his very first car: a bright yellow Chevrolet Corvette C7 Grand Sport.

Schickerowski bought his dream machine without seeing it and before he’d even taken his driver’s test. The Chevvy enthusiast passed the test with flying colors on his first try in July and has been putting the pedal to the metal in the seventh-generation ‘Vette ever since.

“Before I bought the car, I asked for a second opinion from my brother-in-law, Randy,” Schickerowski told Robb Report. “He warned me that she would be ‘a lightning rod for attention, both good and bad,’ but I just had to have her.”

Schickerowski’s brother picked up the car on his behalf and told him to be prepared as “she will snap your head back.” Upon driving the attention-demanding Chevvy for the first time, Schickerowski was blown away by its power and handling.

“At first, I had no idea what I was doing. I oriented myself with the throttle, brake and lane position—all things that probably come easy to seasoned drivers, but not me,” he said. “By the time we exited city limits and hit the highway, I was ready to open her up more. Everything was tight. Snappy. Responsive. The steering was instant, the massive 15-inch calipers grabbed immediately, the suspension could be set to plush or firm. And of course, she snaps your head back!”

It appears the car has exceeded even Schickerowski’s expectations.

“I bought this car because I absolutely loved the looks, but quickly realized that she was so much more. I had a seriously high-performing machine.”

Indeed, the robust ride is fitted with a 6.2-liter V8 engine mated to an eight-speed paddle-shift automatic transmission that can produce 460 horses and 465 ft lbs of torque. She can soar from zero to 60 mph in just 3.9 seconds and hit a top speed of 181 mph. That’s a helluva lot of grunt for your first set of wheels.

The auto enthusiast has also added his own unique spin on the Chevvy, too.

“I spent last winter making over two dozen changes, the vertical doors being the most noticeable.”

It appears Schickerowski snapped up the sports car just in time. Earlier this year, the final C7 Grand Sport was auctioned off after Chevvy ceased production of the model in November 2019. Predictably, collectors are scrambling to get their hands on the ride and no doubt prices will continue to increase. But this particular example couldn’t have gone to a more deserving gent. Godspeed, Mike.