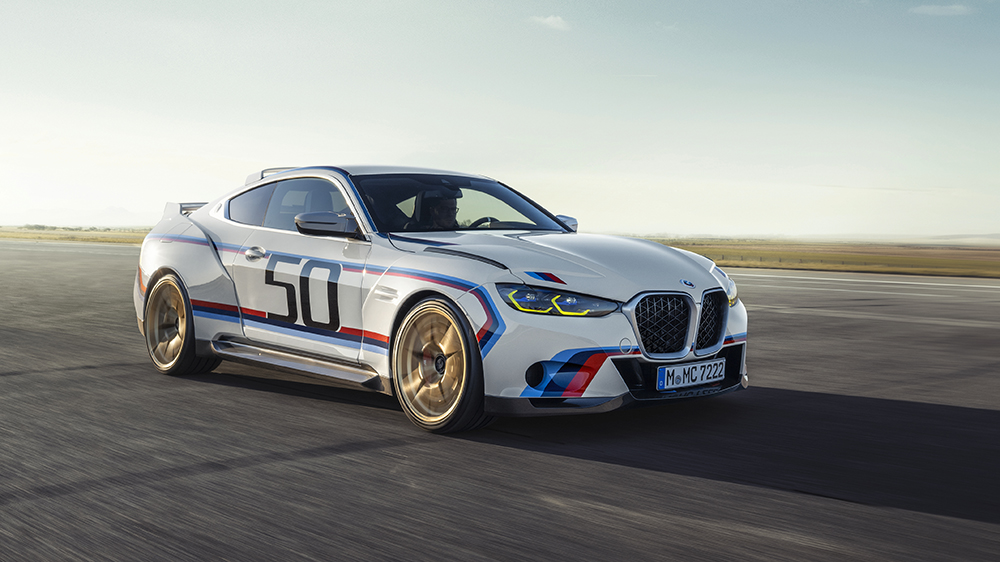 BMW couldn’t let the M division’s 50th anniversary go by without a trip back in time.

The German automaker has just unveiled a limited-edition tribute to the car that started it all—the 3.0 CSL. The modern version of the division’s most famous model even comes with a manual transmission, making it an enthusiast’s dream car.

The original 3.0 CSL, or Coupe Sport Lightweight, debuted in 1972, the same year that BMW M was founded. It was an E9 specifically designed for entry in Group 2 of the European Touring Car Championship and is widely considered the ultimate version of the beloved grand tourer. This is especially true of the dual-winged version which won the overall title at Sebring in 1975 and has come to be known as the “Batmobile.” It wasn’t just a race car, though. The series had a homologation requirement, so BMW had to build and release a road-legal version as well.

The latest 3.0 CSL is also street-legal, which is good because you’ll want to show it off. Although it has giant kidney grilles up front and the same overall shape as a modern M car, there are plenty of throwback details that allow the exclusive model to stand out. These include laser headlights with yellow accents, a sculpted hood with air fins, an extended shirt, gold forged wheels and, most importantly of all, two wings.

The cherry on top is a racing-style livery just like that of the classic Batmobile, though. The base color is Alpine White, which is adorned with traditional M graphics and the number 50 on the sides. Inside, you’ll find carbon-fiber bucket seats and a primarily black color scheme broken up with white accents, including the gear shifter.

Under the hood, you’ll find a twin-turbo 3.0-liter inline-six just like the one in the current M4. It was already the brand’s most powerful inline-six, but a special tuning has upped output to 553 horses—which is a boost of 50 hp and a new record for a street-going BMW. The mill is mated to a six-speed manual that sends power to the rear axle. Torque has dipped a little because of this, but we get a sense that the purists out there won’t mind one bit. The car is also equipped with an M differential, track-focused M suspension and carbon-ceramic brakes.

BMW plans to build only 50 examples of the new 3.0 CSL—all of which will be built in a three-month span—so you’ll want to move quickly to add the anniversary model to your collection. No price has been announced yet, but we expect it’ll be well north of the new M4 CSL’s $139,900 starting price. Don’t fret too much if you miss out, though. Other 50th anniversary releases—including the M3 Touring wagon and the top-of-the-line M4—should be a bit easier to get your hands on.