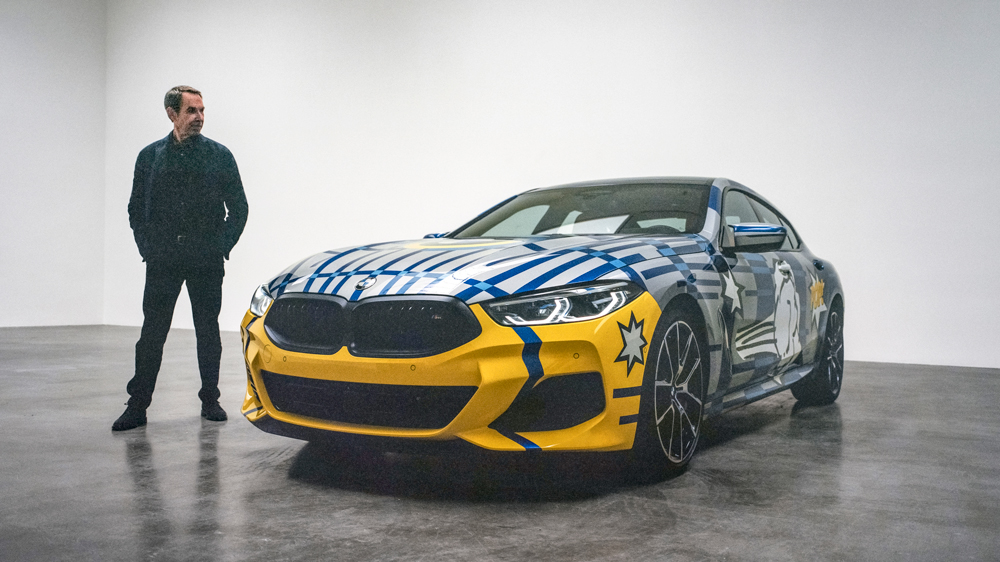 Creative expression is taking over the City of Angels this week during Frieze Los Angeles, the international art fair—happening in Beverly Hills—that draws patrons, dealers, curators and the curious to see what’s new on today’s fine-art front. Debuting there is the 8 X Jeff Koons, an extremely limited-edition model created by the artist for BMW. The vehicle chosen as his “canvas” is the BMW M850i xDrive Gran Coupe, interpreted by Koons with both a customized interior and exterior unmistakable for that of any other car. “I’m so excited about this countdown until its release,” Koons told select journalists on a virtual roundtable prior to today’s launch. “I’m thrilled about the car. This is a car I designed that I wanted for myself.”

Koons is best known for his sculptures, especially his balloon rabbit that set the record for the most expensive work by a living artist when it sold for $91 million in 2019. For considerably less, the 8 X Jeff Koons captures the vision of the artist in a rolling sculpture that entails one of the most complicated production processes of any BMW ever made. The exterior involves hundreds of hours of custom paintwork and uses 11 colors in a striking graphic design, predominantly in hues of blue with bold yellow and silver accents.

BMW’s affiliation with artists goes a long way back, ever since the marque’s first collaboration with Alexander Calder in 1975. That’s when the sculptor, known for his colorful mobiles, embellished a 3.0 CSL race car. Since that time, notable BMW Art Cars have been signed with names like Stella, Lichtenstein, Warhol, Rauschenberg and Hockney.

Jeff Koons is no stranger to the BMW Art Car program, and was enlisted to create the 17th Art Car in the series, his wildly colored M3 GT2 race car from 2010. The latter competed in that year’s 24 Hours of Le Mans while wearing one of the most dynamic paint schemes of any artsy Bimmer. Until now.

The artist behind the wheel of the extremely limited-edition 8 X Jeff Koons.  Photo: Courtesy of BMW.

“I always wanted to be a part of [the BMW Art Car] group,” said Koons, who expressed his initial interest in 2008. Shortly afterward, he was invited to participate. “It was one of the most special days I’ve experienced,” he said. Koons explained to us that he initially proposed two designs for the 2010 project. Plan A was a variation of the one used today for his 8 X, but was too elaborate and relied on lenticular lenses to create a sense of depth on the surface paint, adding unwanted weight to the M3 GT2 race car. Plan B was the design that ultimately became the 2010 car. “I wanted to work together [with BMW] again,” he continued, “so I could make something that children could look at and say, ‘Mom, dad, did you see what just drove by?’”

The rear of the 8 X Jeff Koons features colors that fairly explode in homage to the 2010 race car. The word “POP” on each side, along with energetic lines, suggest power and speed—elements the artist is familiar with. “I used to work at drag strips when I was in high school,” said Koons.

The rear of the vehicle pays homage to the 2010 BMW race car that Jeff Koons also used as a canvas.  Photo by Enes Kucevic Photography, courtesy of BMW.

The interior, which he noted alludes “to Wonder Woman and Spider-Man,” is no less colorful, with leather punctuated in shades of red and blue that complement the bold exterior. About the car, Koons added, “At its core, it’s poetry; simple forms of energy that gain width as they go toward the rear of the car. The brashness of the yellow bumpers, the pop, pop, pop, the swish, are the vocabulary of acceleration, expressing the essence of our potential.”

Wonder Woman and Spider-Man are the inspirations for the interior.  Photo by Enes Kucevic Photography, courtesy of BMW.

The 8 X Jeff Koons has been in the artist’s mind for quite some time. “I started working intensely [on the project] in 2017, and almost daily for many years,” he told us. “I can’t wait for the car to be on the road. I will be driving the car I have for myself.”

Because of the hundreds of hours needed to paint each one, BMW plans to produce two cars per week by specialized teams at its facility in Bavaria. Each of the 99 examples to be made comes with a large-format certificate of authenticity signed by Koons and BMW Chairman and CEO Oliver Zipse.

Because of the hundreds of hours needed to paint each car, BMW plans to produce two examples per week, and only 99 in total.  Photo by Enes Kucevic Photography, courtesy of BMW.

Following its Los Angeles premiere, the first example will go to Rockefeller Plaza in New York City in time for a charity auction at Christie’s New York on April 4. Its sale will benefit a charity important to the artist (who has eight kids) called the International Centre for Missing & Exploited Children (ICMEC). BMW lovers who are also Koons fans can pre-order their own $350,000 8 X Jeff Koons exclusively through bmwusa.com.