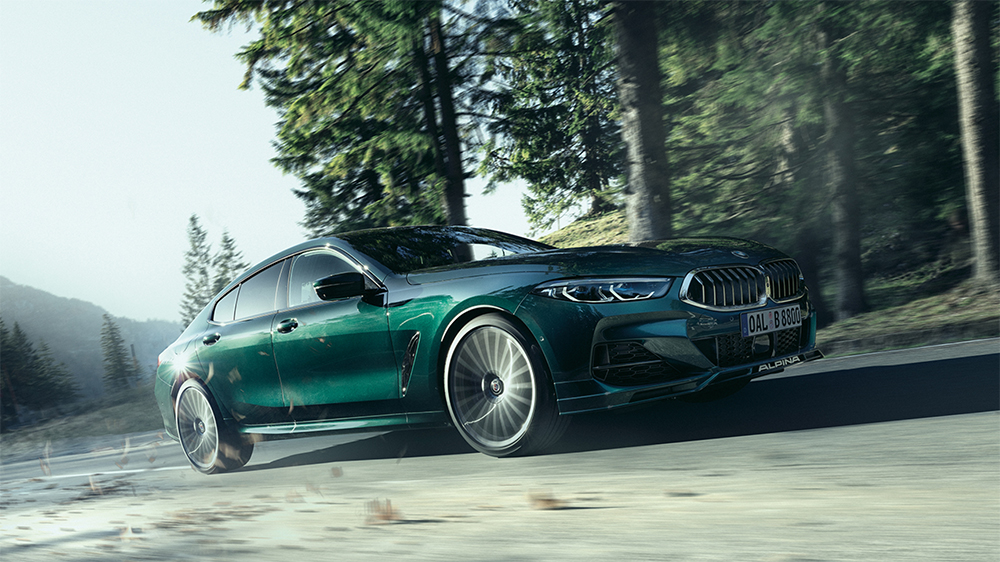 Alpina has never seen reason to differentiate between luxury and high-performance vehicles, and that’s no less true of its latest confection.

The German performance automaker has just unveiled a new souped-up BMW, the Alpina B8 Gran Coupe. The stately car is easily the most luxurious entry in the new 8-Series lineu, and it also happens to be one of the most powerful thanks thanks to its gutsy V-8 engine.

Inside the Alpina B8  Alpina

At a glance, the Alpina B8 doesn’t look all that different from the standard B8 Gran Coupé. That’s a good thing, because the five-door is already one of the most elegant vehicles in the BMW lineup. There are some changes, of course. Both ends of the vehicle have been tweaked, with a larger air intake and a diffuser up front and a lip spoiler in the back. There’s also special Alpina decals and badging, as well as its trademark 21-inch, 20-spoke forged wheels, which come wrapped in Pirelli performance tires.

The interior has also been given a subtle makeover. Almost everything—including the multi-functional front sport seats, steering wheel and instrument panel—is covered or accented with Merino leather finely crafted in Alpina’s in-house workshop. Behind the steering wheel, you’ll find a 12.3-inch digital instrument cluster. The center console is topped by BMW’s 10.3-inch touchscreen infotainment system, from which you can access the navigation and driver assistance system. A Harman Kardon surround sound system also comes standard.

While the raft of opulent accoutrements gives the Alpina B8 bona fide luxury appeal, the beastly mill under its hood may be even more impressive. The engine is the same 4.4-liter twin-turbo V-8 found in M850i and M8 model. Mated to an eight-speed automatic transmission, it’s been specially tuned so that it generates 612 horses and 590 ft lbs of twist. That makes it the second most powerful 8-Series car, trailing only the M8 with the Competition package, which delivers 617 hp. It’s pretty speedy, too, able to accelerate from zero to 60 mph in 3.3 seconds and reach a top speed of 201 mph.

The Alpina B8 Gran Coupé is expected to arrive in the US later this spring. In addition to being the most luxurious entry in the 8-Series lineup, it’s also the most expensive with a starting price of $140,895.