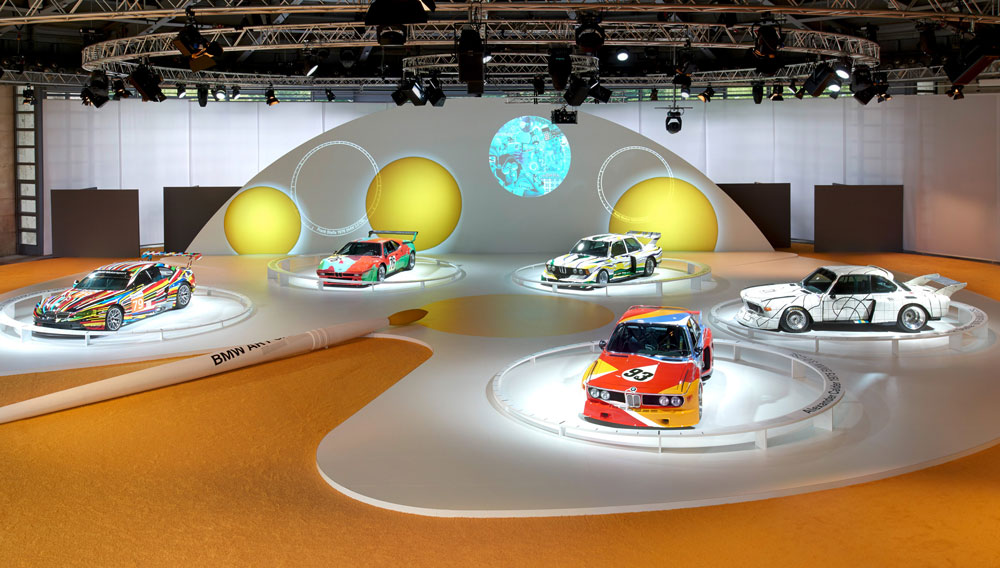 This year BMW marks 40 years of the BMW Art Car program with special exhibitions that will run in New York, Miami, and Shanghai. In May, a selection of these “rolling sculptures” appeared at the Concorso d’Eleganza Villa d’Este on Lake Como. U.S. pop artists created the designs of the earliest four cars, which were specifically intended to compete in the 24 Hours of Le Mans—arguably the most important endurance race in motorsports.

The first BMW Art Car created was Alexander Calder’s 3.2-liter, 480 hp, 3.0 CSL, commissioned by the art dealer and racing enthusiast Hervé Poulain, who co-drove the car with Sam Posey and Jean Guichet at Le Mans in 1975. Calder’s car is painted in the artist’s trademark palette of primary colors. Although the car was retired after only seven hours on the track (due to a defective prop shaft), it garnered remarkable attention and ignited what would become an entire series of BMW Art Cars.

Next came the 1976 3.0 CSL, designed by Frank Stella to portray the car’s technical nature with a design that incorporates graph paper and curves meant to represent drafting tools. For the third car, a year later, Roy Lichtenstein graced a BMW 320i with his comic-book-style benday dots.

The fourth work of art was a BMW M1 painted by Andy Warhol. With the previous cars, the artists had created their designs on scale models, then transferred them to the vehicles. But Warhol, never known for conformity, showed up at the studio to paint the full-size car, in part by hand, in less than half an hour.

Later in the Art Car program, the canvases shifted from racecars to production vehicles. These included a 1982 635 CSi by Ernst Fuchs, a 1989 M3 by aboriginal artist Michael Jagamara Nelson, and a 1991 525i by South African artist Esther Mahlangu (BMW’s first female Art Car painter). Then, in 1999, the attention returned to racecars with Jenny Holzer’s V12 LMR prototype, emblazoned with phrases in big bold letters including “Protect me from what I want” and “The unattainable is invariably attractive.”

As a peculiar departure, in 2007, the Danish artist Olafur Eliasson removed the body of a prototype BMW H2R hydrogen-powered racecar and replaced it with a stainless-steel structure frozen over with icicles. Though provocative, the car was rarely shown because it required storage in a gigantic freezer.

The entire Art Car collection currently consists of 17 vehicles, the most recent of which is a 2010 M3 GT2 by Jeff Koons that depicts streams of color running the length of the car and ending in a dynamic explosion at the rear. Sources at BMW hint that the next Art Car may be on the way. If true, it would certainly make a fitting 40th anniversary gift. (artcar.bmwgroup.com)