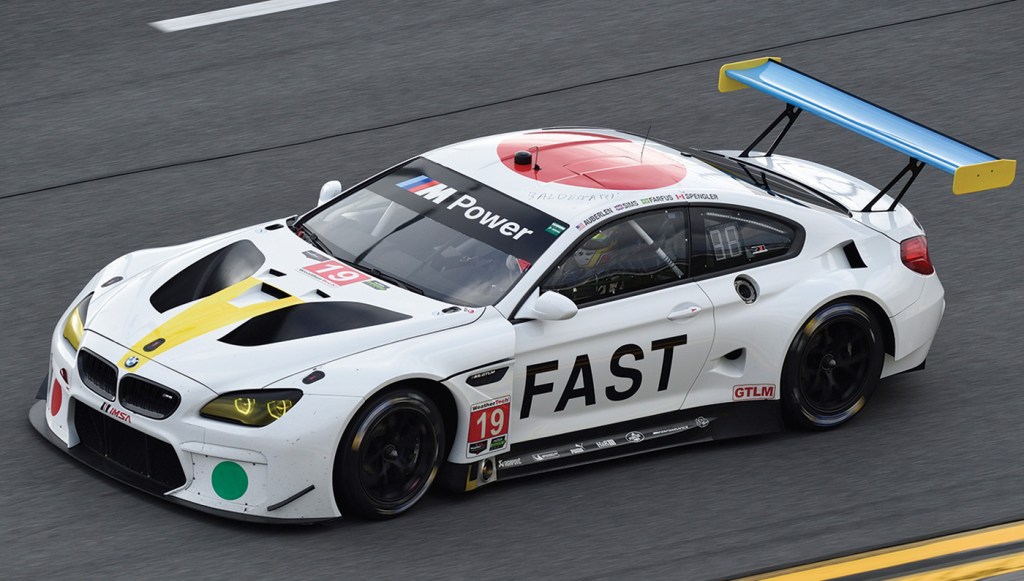 With a big red dot on its roof, the No. 19 car was easy to spot at this year’s Rolex 24 at Daytona. John Baldessari, the 85-year-old conceptual artist who designed the livery, wanted it that way. “I will always know where the car is when I watch the race on TV,” he says with a laugh. The RLL M6 GTLM has joined the collection of BMW Art Cars (artcar.bmwgroup.com), rolling sculptures displaying one-of-a-kind paint jobs by Andy Warhol, Roy Lichtenstein, Jeff Koons, and other renowned contemporary artists.

Baldessari had only two constraints when creating his Art Car: The design had to comply with racing regulations, and it could not add weight to the vehicle. “I wanted to make it very obvious that this was a car,” says Baldessari, whose mixed-media pieces often feature colored dots placed over portions of black-and-white photographs. “On one side of it I actually have a photograph of the car. I like the redundancy of it, to say, here’s a photograph, here’s the real thing.”

Baldessari’s is chronologically the 18th car in the series. The 19th was designed by the Chinese artist Cao Fei. It was scheduled to debut in Beijing on March 31, after Robb Report went to press. The Art Car program began in 1975, when the French art dealer Hervé Poulain convinced BMW to let him co-drive in the 24 Hours of Le Mans in a 3.0 CSL painted by his friend Alexander Calder. The Calder car didn’t finish the race, but Baldessari’s placed eighth in its class at Daytona. It has now joined the rest of the collection on the museum circuit.