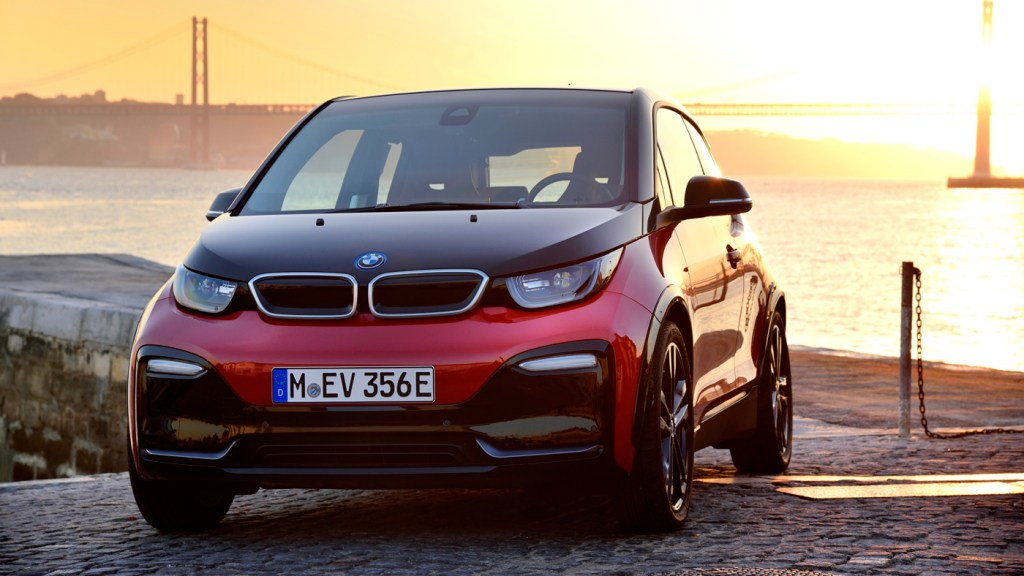 Given the number of times I’ve spotted the futuristic BMW i3 creeping around San Francisco at an electric snail’s pace, the BMW design team’s desired objective of inspiring Zen-like driving behavior appears to have found appeal, at least among a certain subset of the driving public. But it would also seem that the original i3 didn’t quite capture the imagination of consumers drawn to the brand by its reputation for exciting driving dynamics.

In an attempt to attract such individuals, BMW has devised a sportier version, the i3s, which premiered at the International Motor Show in Frankfurt this past September. It went on sale in the U.S. in January.

On a recent morning, I set off for Elk, a town on Northern California’s Mendocino coast, in a particularly snappy example of the i3s dressed in deep metallic red and perched on a set of striking, blacked-out 20-inch alloy wheels—which are included in BMW’s $1,800 Giga World package. The ultra-crisp display indicated 114 miles of charge; a two-cylinder gasoline-powered range extender (which adds $3,850 to the base price of $51,500) promised to stretch that figure to 180 miles. Traffic was heavy in the city, but I felt strangely aloof, calm, and relaxed in an airy capsule lined with leather, wool, and invitingly touchable open-pore eucalyptus which grows abundantly in the national park that abuts the southern end of San Francisco’s Golden Gate Bridge.

On the freeway section of the drive, there wasn’t much call for Sport mode, so I toggled between Comfort, Eco Pro, and Eco Pro Plus, eventually settling on Eco Pro as the 55 mph limit imposed by Eco Pro Plus was a bit restrictive for Highway 101. At a steady 65 mph, the i3s was whisper-quiet due to the fact that it was running exclusively on battery power at this point, and to an impressively low .30 drag coefficient.

Turning west onto Highway 128, a beautifully twisty road that cuts west through the Anderson Valley toward State Route 1, I bumped the i3s into Sport, a setting not available in previous i3 models. Throttle response sharpened dramatically, and the acceleration went from merely fast to nearly manic. Flat-out on a relatively straight stretch, I felt the first hint of dissonance between the i3s’s meditation-inducing interior and the 199 ft lbs of torque clawing at the asphalt. According to BMW, the i3s goes from a standstill to 60 mph in 6.8 seconds, nearly half a second quicker than the i3; and its top speed is 99 mph, versus 93 mph for the i3.

The steering felt somewhat abstract—not due to a lack of precision, per se, but to a lightness that seemed a little out of place in a sport model. I suspect this is a generational gripe, and one that will diminish in frequency as drivers who grew up on conventional hydraulic rack-and-pinion systems have their licenses taken away and shuffle off into the fully autonomous pods that await them.

I’d been consuming electrons at a pretty good rate and, just before the town of Boonville, became aware of a low thrumming vibration that called to mind the onboard generator in an Airstream Interstate that I drove not long ago. If the noise seemed out of place in an ultra-luxury RV, it seemed equally so in a vehicle so squarely aimed at offering a vision of an all-electric future. Luckily, the i3s was also equipped with satellite radio. I turned it up. Disco.

In spite of the reminder that even the most forward-looking companies in the automotive industry have a ways to go before transitioning away from internal combustion, the i3s’s performance was brisk as ever, thanks to the fact that the two-cylinder, 647 cc unit sends current directly to the electric drive motor and, when producing a surplus of energy, recharges the batteries, as well. A BMW representative allowed that the range extender, which adds 280 pounds of hardware plus gasoline emissions, “is not the best solution for an all-electric vehicle.” That said, the i3’s modular design can accommodate future battery upgrades, and BMW expects the range extender to “disappear” when advances in battery technology allow the i3 to go 180 miles or more. The BMW representative added the caveat, though, that customer demand could prolong the option’s survival.

Droning noise aside, I was grateful for the extra range. Boonville is a charming town, but I was keen to get on to Elk and the Harbor House Inn, which has some of the most beautiful views—and serves some of the most compelling food—on the North Coast. Elk, incidentally, doesn’t have a gas station, but the parking lot at its state beach is outfitted with two free Level 2 chargers.

It was on the final twisty stretch where, picking up the pace a bit, I began to grasp the limits of the car’s sporting aspirations. The i3s touts a standard sports suspension with a 10-millimeter drop in ride height from the regular i3. The difference provides both a tauter ride and a satisfying crispness in the curves, provided the road is nice and smooth. But when cornering at a fair clip on even a moderately uneven surface, the ride became hippety-hoppety in a way that could strike you as either fun or unnerving, depending on your outlook. The latter handling dynamic is a product of synergy, I imagine, between the car’s lightweight materials; its skinny, energy-conserving tires; and just possibly taking the letter “s” for Sport a bit too literally.

In Elk’s general store, I struck up a conversation with a local man who’d seen me plugging in the i3s at the state beach parking lot. He himself owned a non-sport i3, which was plenty zippy for him, and loved it. We bonded over its design, our shared appreciation of an interior that makes one less prone to road rage, and, in spite of an occasional jitter on rough pavement, the guilty pleasure of knowing that few cars on the North Coast could keep up with us.