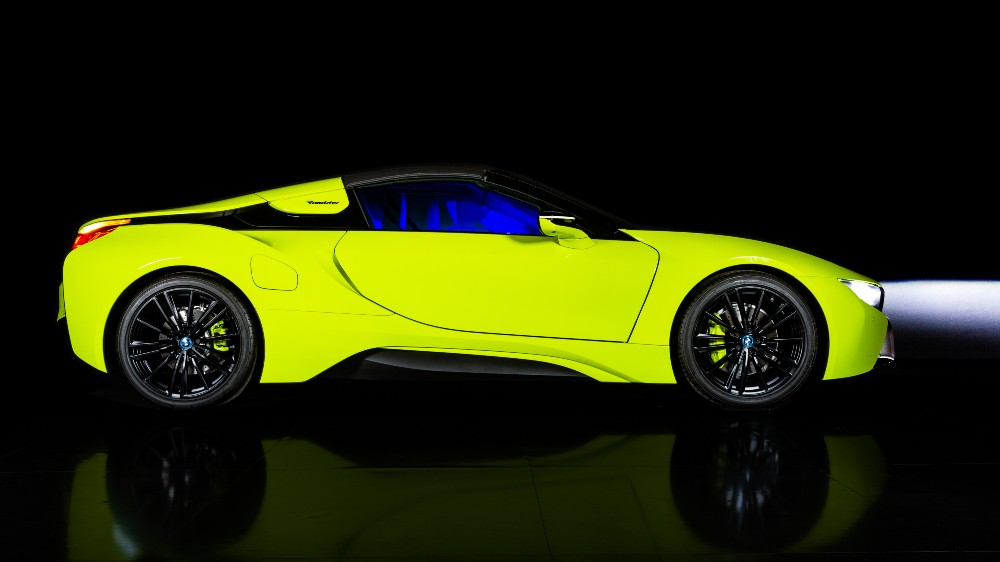 BMW knows there’s more than one way to add some pop to a car. Sometimes it’s a matter of modifying the vehicle’s body or souping up its powertrain. And other times, all that’s needed is something as simple as a bold new paint job.

Months after debuting its X6 crossover in light-absorbing Vantablack at the Frankfurt auto show, the automaker has gone in the complete opposite direction with a special new i8 roadster in blindingly bright Limelight. The result of a collaboration between BMW Italia and textile maker Alcantara, the one-off variant makes the futuristic sports car more eye-catching than ever before.

There’s really no place to start talking about the hybrid two-seater other than with its neon yellow paint scheme. BMW Italia has managed to take the fluorescent pigment of the brightest highlighter you’ve ever seen and turn it into a car color that almost appears to glow. Whether you love it or hate it, it’s impossible to deny that it makes the i8 stand out. Adding to this is a series of black accents on the hood, sides and trunk that further accentuate the car’s flowing curves and forward-thinking design.

But the bold customization doesn’t stop outside the vehicle. Open up its scissor doors and you’ll find a steering wheel, dashboard, seats and door panels covered in black Alcantara. While the interior is primarily done up in black, there are lime green and carbon accents on the seats and dash, along with blue ambient lighting, making it basically the complete inverse of the car’s striking exterior.

But while the one-of-a-kind Limelight i8 is certainly cool looking, the customization is also meant to highlight the hybrid’s green nature and Alcantara’s dedication to lowering emissions. According to BMW, each square meter made by the textile company has a zero net CO2 balance. Alcantra was the first Italian industrial company to be certified carbon neutral by the TÜV SÜD organization back in 2009.

Of course, it should come as no surprise to anyone that BMW is willing to have some fun with colors. After all, the X6 the company debuted in September was finished in Vantablack. The “super black” pigment absorbs 99 percent of light and was originally intended for use coating aerospace components. We can’t wait to see what color they decide to play with next.

Check out more photos of the i8 Limelight Edition below: