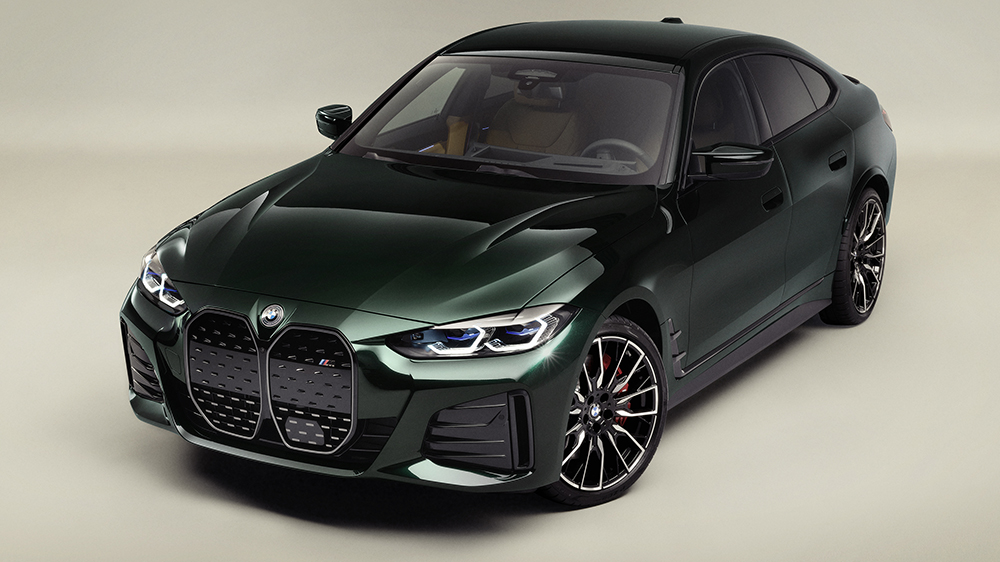 Even brand collaborations are embracing electrification.

BMW and Kith have just unveiled their latest limited-edition vehicle: the 2022 BMW i4 M50 by Kith. Only seven examples of the gorgeous EV will be built, the first of which will go up for auction later this month.

Like the brands’ previous collaborative model, the M4 Competition Coupe, the exclusive vehicle was designed by Kith founder Ronnie Fieg. The body is almost identical to that of the regular i4 M50, but comes exclusively in the American streetwear brand’s Vitality Green shade. It also has a special version of the M badge on the rear decklid, which works in the Kith wordmark. Inside, the luxe interior is covered in caramel full-gain merino leather. The cabin also features “Kith Exclusive Edition” branding on the dashboard, center console and headrests. The elegant look of the vehicle is based on that of BMW’s first EV, the 1972 1602 “Elektro”. Fieg has also designed a special one-off tribute to that car, though it’s not for sale.

Untouched is the car’s all-electric powertrain. We can’t imagine there will be any complaints about that, though. The vehicle has two electric motors—one on each axle—that combine to pump out a thrilling 544 hp and 586 ft lbs of instantaneous torque. That’s enough oomph to zip from zero-to-60 mph in just 3.7 second and to hit a top speed of 131 mph. The car can also travel up to 271 miles on a single charge thanks to its 81-kWh lithium-ion battery pack.

Getting ahold of the car won’t be easy, though. Only seven examples of special edition i4 M50 will be built. One of those will be auctioned off by Sotheby’s later this month—the EV is being sold without reserve but has a pre-sale estimate of $100,000 to $200,000—while the other half-dozen will be sold for an undisclosed price later this year. Whatever the cost, we imagine it will be north of the standard i4 M50’s $67,300 starting price.

If you miss out on the car, you’re not completely out of luck. BMW and Kith have also teamed up for a second apparel and accessory collection, which consists of 51 items, including jackets, knitwear and even a candle created with DS & Durga.