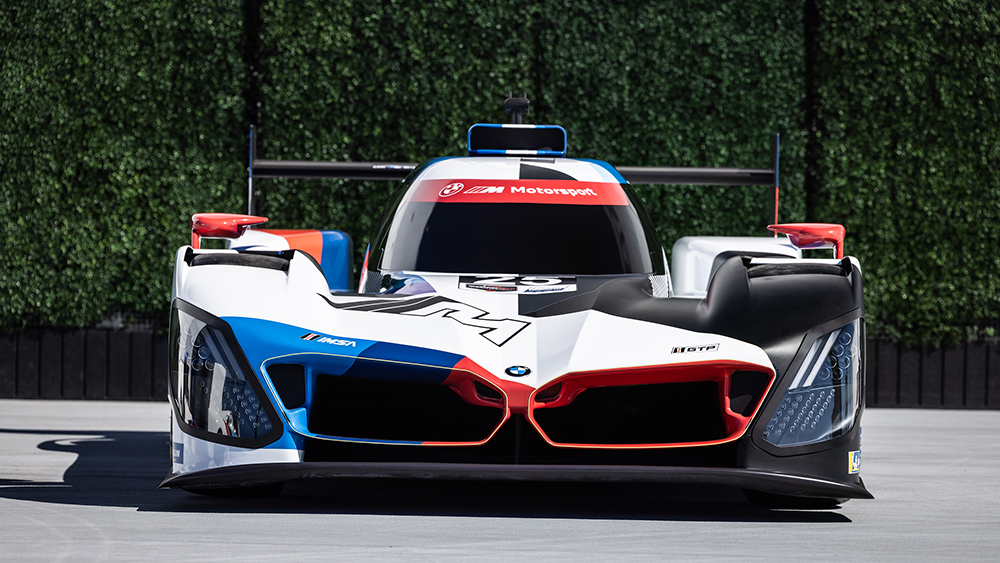 BMW’s latest racecar was recently unveiled at the Petersen Automotive Museum rooftop in Los Angeles. And if the heavy hitters in attendance were any indication, the German marque is dead serious about pushing its new Le Mans Daytona hybrid (LMDh) entry to victory.

From Team RLL principals David Letterman, Bobby Rahal and Patrick Lanigan to IMSA president John Doonan to BMW M and Motorsport bosses Frank van Meel and Andreas Roos, getting these industry heavyweights together in person means business. That business is the freshly revealed BMW M Hybrid V8 racer, whose alien aerodynamics, avant-garde graphics and advanced drivetrain signal what promises to be a force to be reckoned with when it competes in the nostalgically named GTP class of the IMSA WeatherTech SportsCar Championship next year.

The field is attracting a kaleidoscope of carmakers, including Acura, Alpine, Cadillac, Porsche and Lamborghini, aided by its financially attractive arrangement of standardizing key parts of the vehicle, including the chassis, hybrid hardware and transmissions. BMW’s M Hybrid V8 includes the Bavarian outfit’s aluminum, 4-liter twin-turbo V-8 with a 90-degree vee between the banks of cylinders. While BMW has been predictably vague about engine power, the mill spins to 8,200 rpm and output is estimated at around 640 hp and 479 ft lbs of torque.

While the LMDh cars share a similar silhouette and spine, some surface details (like BMW’s familiar twin nostrils and reinterpretation of the so-called Hofmeister kink) are unique to the racecar. Illuminated rim lighting around the front air intakes hailing from the Swiss firm L.E.S.S. SA was inspired by 2019’s BMW M Vision Next, and uses a nano-active optical fiber triggered by a laser.

The racecar’s livery, meanwhile, was created by BMW Group Designworks, who is also responsible for assembling, developing and testing the car. The design incorporates carbon fiber and a non-reflective matte element. It also features what BMW calls a “Mbedded” hat tip to the BMW M Motorsport’s logo, whose blue and purple elements are said to reflect the natural colors of electricity. Crouch down at near-elevation level with the racer and you’ll see a stylized “M” appear on the side. At any other angle, the shapes appear like scattered fractals. To be sure, the racecar is a looker. Former Late Night funnyman David Letterman even quipped about its appearance: “There’s only one thing this machine is made to do and it could be doing it right now—I don’t know, it’s either parked or going 200.”

Also in attendance at the LA unveiling were core drivers Connor De Phillippi, Philipp Eng, Augusto Farfus and Nick Yelloly. Joining for the car’s debut will be IndyCar phenom Colton Herta, who scored a 2019 victory with BMW’s Team RLL driving the M8 GTE in the GTLM class. An extensive testing regimen has already been kicked off at Sebring International Raceway and will continue throughout the remainder of the year. The BMW M Hybrid V8 will debut at the 24 Hours of Daytona in January 2023.

Click here to see all the photos of the BMW M Hybrid V8 racecar.