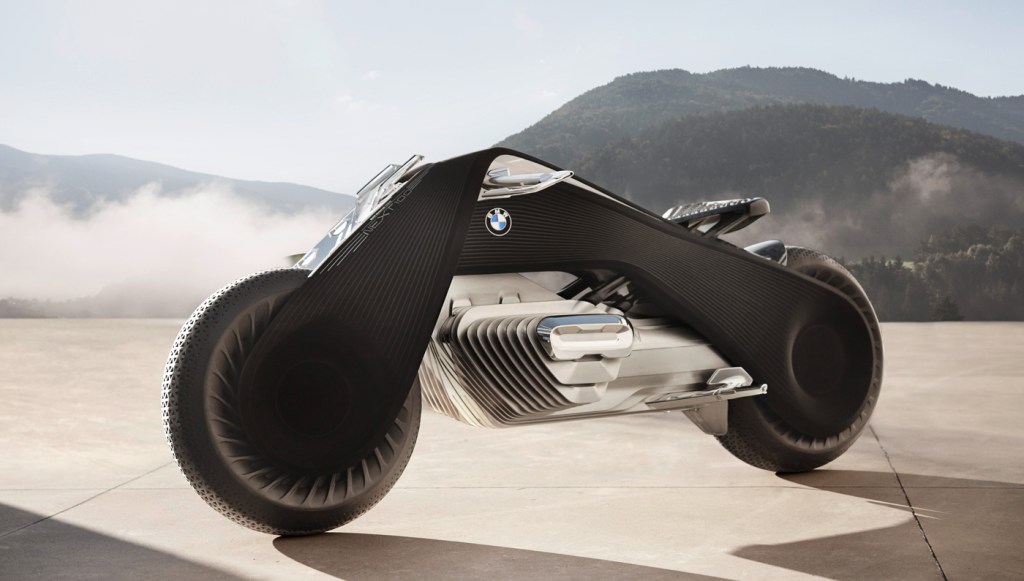 The motorcyclist of the future needs no protective gear, no helmet, and very little riding experience—a least according to BMW Motorrad, which recently unveiled its Vision Next 100 concept bike as part of BMW’s yearlong centennial celebration. The bike is the last in a yearlong series of concept vehicles unveiled for the brand’s anniversary, beginning with the BMW Vision Next 100 concept car introduced in March.

Designers say that although the Motorrad Vision Next 100 concept employs a plethora of avant-garde technology, the goal is to give the rider a feeling of simplicity. “Motorcycling is for the soul,” says Edgar Heinrich, head of design for BMW Motorrad. “We want to give customers the same experience that people had in the very early days of motorcycle riding.”

A radical departure from traditional bikes, the Motorrad Vision Next 100 concept keeps the rider safe by preventing accidents before they happen.  “We imagine that through technology, we can avoid accidents in different ways than [by] covering the driver,” says Adrian van Hooydonk, head of design for all of BMW Group’s brands. One way is through a self-balancing system, which uses gyroscopes to keep the bike upright in dicey situations (and also keeps it upright when stopped or parked). Another is through the bike’s accompanying visor, which acts as a virtual display, projecting the ideal riding line onto the road. “This provides beginners with feedback on their progress, as well as challenges experienced riders,” van Hooydonk says. The concept bike’s matching suit is lightweight and breathable, with extra support in key areas of the body to reduce fatigue. Heinrich adds that riding gear in the future “will be more of a fashion statement.”

The bike’s black triangular frame and white lines pay homage to BMW’s first production bike, the R32, built in the 1920s and ’30s. Mechanically, the Vision Next 100 concept forgoes a front fork and traditional motorcycle suspension for a flex frame that is connected directly to the front wheel. “This allows us to create new steering movements,” Heinrich says. A fabric-like fairing changes shape depending on speed and the bike’s steering angle to optimize aerodynamics.

Although the BMW Motorrad Vision Next 100 Concept is only a study in what could be, Heinrich says some of the technology may appear on future bikes. “We love to do these kind of exercises,” he says. “If you ask the customer, ‘What do you want?’ [They will say] more speed, more comfort, and more horsepower. But this is not what drives visionary things. We like to look at the future. [This bike] looks beyond what we usually do. Usually we look four, five, six years into the future. This is like 30 years, which is crazy.” (bmwmotorcycles.com)