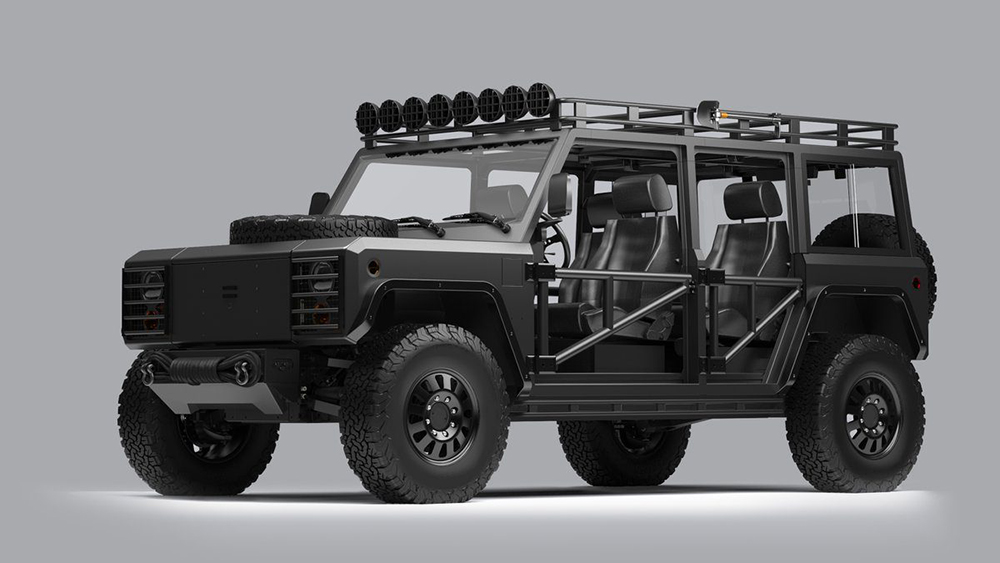 Back in January, we had the pleasure of interviewing the founder of Bollinger Motors, Robert Bollinger, about his groundbreaking all-electric sport utility truck: the B1. As Bollinger has quickly proved, anyone who thought he was done there was sorely mistaken.

First, Bollinger trumped the B1 by unveiling an impossibly cool pick-up version, the B2. Now, the company has introduced a slew of custom configurations designed to make the B1 and B2 even more bespoke. In fact, the new modifications have all come from you. The Michigan-based marque told Robb Report the concepts “were created based on customer interest,” which prompted electrifying changes to both prototypes.

Rocking a new open-air look, the B1 and B2 have both had the original doors ripped off and replaced with a minimalist tube-frame alternative. They also acquired a new set of roof racks with all-important off-road lighting mounts, as well as headlight grilles, fender flares, and a hefty truck winch for any heavy lifting that’s required.

The B2 pick-up also gained a cargo pass-through which spans the entire length of the truck and cab to provide further carrying options, while its predecessor scored a new roof ladder and handy spare wheel. Bollinger didn’t specify whether or not it would be making any of these configurations available to order—but we imagine these seemingly minor mods will change the off-road experience for the better.

From the outset, Bollinger was clear with its mission to take the best of a pickup and the best in off-road capabilities and combine them into one all-purpose vehicle (or two in this case). Both SUVs come equipped with a 120 kWh battery pack—which delivers 614 hp and 688 lb-ft of torque—dual motors, hydropneumatic suspension, and in-wheel portal gear hubs. Basically, they’re all-electric, all-aluminum, all-wheel brutes with a ton of power.

Bollinger says the retail price will be announced soon, with production slated to start in the second half of 2020. You can reserve your truck online here.