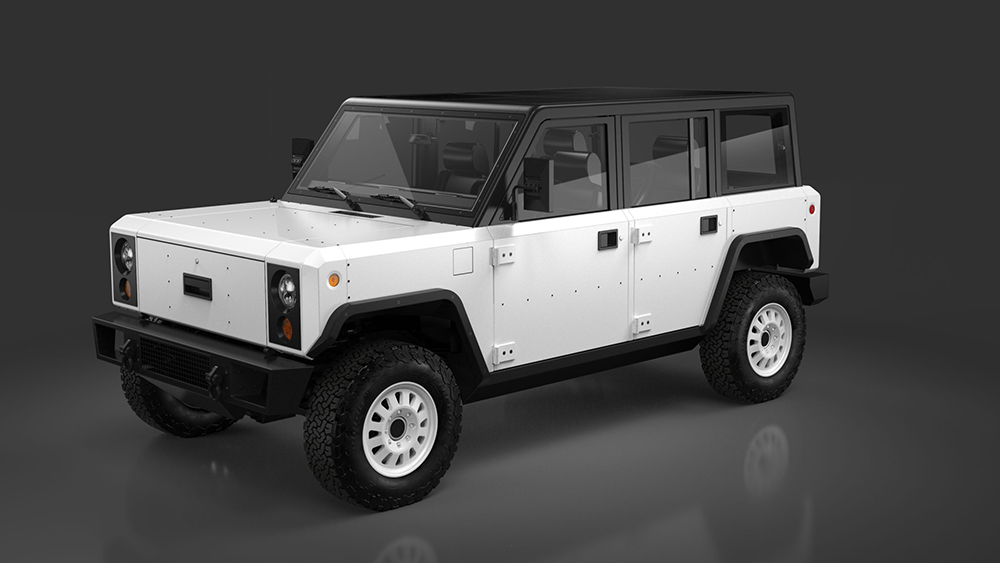 Bollinger Motors has been refining its drool-worthy electric pickup and SUV for what feels like an eternity, but the fully realized models are finally here. The automotive startup has just revealed renderings of the production-intent B1 and B2, and they’re a clear departure from previous prototypes.

The first thing Bollinger fans will notice is that the two EVs look lighter and brighter. This is largely thanks to a new white colorway. Prior to this, the Michigan-based outfit colored its concepts and show cars exclusively in menacing jet black. The intimidating exterior has also been fine-tuned and now sits somewhere between a monster truck and a Suzuki Jimny.

Bollinger says the exterior design changes were made possible thanks to a breakthrough in thermal management. The automaker was able to reduce the size of the radiator and equip one slim cooling unit behind the bumper. The initial prototype was fitted with dual top-mounted radiators that used the headlight area as an air intake. The new setup not only means that the radiator receives better airflow, but the car’s front fascia could also be widened. Bollinger also tweaked the headlights to make them slightly less intimidating and aligned them with the rear set for more overall symmetry.

Elsewhere, Bollinger raised the “shoulder” or belt line of the truck by two inches to give more space for components under the hood, as well as a little more headroom. The B-pillar, which sits behind the front seats, was also pulled forward to make it easier for passengers to get in and out of the sizable beasts. Plus, the bed on the B2 pickup is now independent of the cab, which the automaker claims will make repairs and replacement easier.

Other minor adjustments include switching the three windshield wipers for a traditional two-wiper setup and replacing the unusual sliding glass windows with regular ones that are operated with manual cranks.

Despite the design changes, the vehicle’s touted output remains the same. The battery-powered brutes are reportedly capable of delivering 614 horses, 668 ft lbs of twist and 200 miles of range. The vehicles start at $125,000 and Bollinger is slated to begin production at the end of next year. If you can’t wait that long, you can reserve your B1 or B2 via Bollinger’s website with a $1,000 deposit.

Check out more renders of the white and black models below: