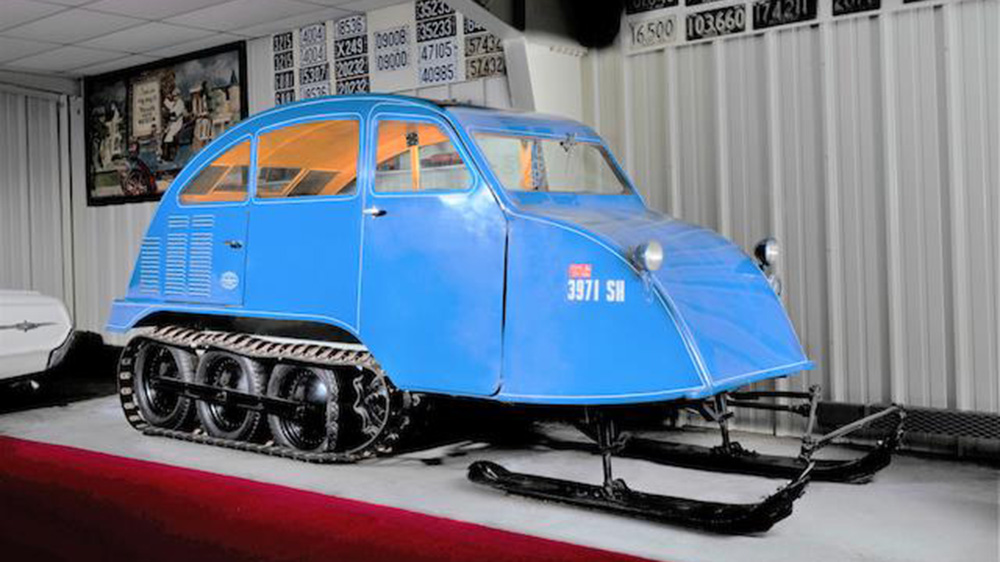 Spring may have just arrived, but at least one vehicle going up for auction at Bonhams’s next sale may have you longing for winter’s return.

Impossible, you say. Wait until you check out the 80-year-old Bombardier B-7 snowmobile. Set to hit the block late next month at the auction house’s  Amelia Island auction, the restored snow cruiser will have even the most cold-averse among us wishing for a thick snow fall so they can take it out for a spin.

Although the B-7 was born out of a family tragedy—inventor Joseph-Armand Bombardier’s young son died during the winter because no vehicle could safely transport him through the snow—it’s also a dazzling creation. The vehicle, which was referred to at the time as a “snow coach,” looks like an old-fashion family wagon with skis and tank treads in place of its wheels, so that it can “float over the snow.” After being introduced in 1935, the vehicle proved to be a hit, and by the end of the decade, the Canadian company had built more than 100 examples.

This restored model, chassis no. 18-5932072, hails from the early 1940s. It’s finished in bright blue with thin white pin-striping and has two round headlights perched atop its hood. The interior—which, like all B-7s, has room for seven—features gorgeous renewed woodwork, completely refurbished seating and a heating system, although it’s unclear if it works.

Inside the Bombardier B-7

The B-7 is undoubtedly one of the coolest-looking snowmobiles of all time, but it also has a surprising amount of power. It may not be as quick as some of today’s snowmobiles, but its 3.6-liter Ford flathead V-8 had some serious grunt for the time. Thanks to a three-speed manual gearbox, the engine was able to send 90 hp to the rear treads—nothing too crazy but more than enough to cut through the snow with ease.

While it’s best suited for display in a museum, Bonhams says the blue B-7 is still in running order. That alone may make it impossible to resist when the vehicle goes up for bid on May 20. The auction house expects the beautiful snowmobile to fetch between $30,000 to $40,000. That may be steep for something you can only drive in the snow, but think about how much fun you’ll have showing it off.