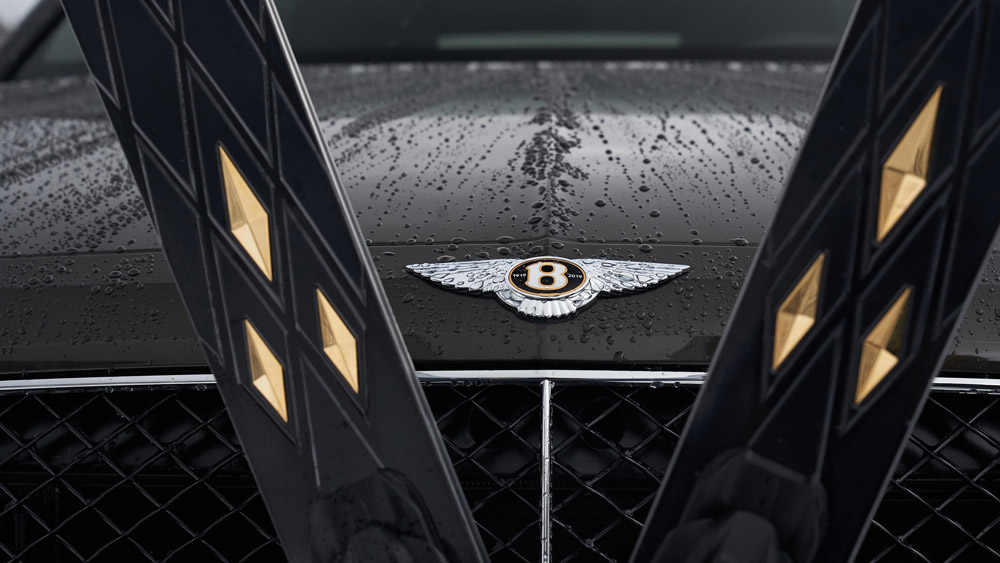 Super-exclusive ski adventures don’t come more luxurious than this. Jet into Telluride, Colo., for three days on the slopes with Olympic ski legend Bode Miller. Get handed the keys to one of the latest Bentley models to go exploring. Then jump on a private jet for three more days of the same in Park City, Utah.

During the six days, you’ll stay in five-star resorts, chow-down on gourmet cuisine while quaffing the finest wines. You’ll also ride in snowcats and helicopters. You might even get to test-drive a pair of $3,750 skis with 24-karat gold inserts.

Next month, disrupter ski brand Bomber Ski, together with its new partner Bentley Motors, is holding the first “Bomber for Bentley Ski & Drive Experience.” Just how spectacular a trip will it be? We recently got a private preview of what 18 lucky participants might expect.

“For both Bomber and Bentley, it’s all about creating exceptional experiences and providing access to the inaccessible,” says Robert Siegel, real-estate mogul and Bomber Ski principal. “Our aim is to give our customers the kind of experiences, both on and off the slopes, they’ll never forget”.

The A-list adventure kicks off at Telluride’s 9,000-foot-high airport where participants get behind the wheel of one of the latest Bentley rides. Take your pick from the brand new 2020 Flying Spur, a 2020 Bentayga Speed—the world’s fastest SUV—or a sleek, new Continental GT coupe or convertible.

Cruising through Telluride in the tony Bentley Bentayga and Continental GT.  Photo: Courtesy of Bomber Ski.

Our choice? An exquisite 542 hp Continental GT V8 in purpley, almost-black Damson with 22-inch Blackline rims and a stunning diamond-quilted leather interior. Yours for $200,000, or $235,000 nicely-loaded.

It took us in style to the ski-in, ski-out Lumière with Inspirato boutique resort in Telluride’s Mountain Village. Remodeled last year, it offers just 18 spacious suites—the Penthouse is the hotel’s five-bedroom, 3,715-square-foot whopper.

Check in, kick back and be introduced to your personal ski valet who’ll fit you with a pair of the latest Bomber skis. Ask nicely and you might get to try out a pair of Bomber for Bentley Centenary Edition skis, designed by Bentley lead designer Chris Cooke to celebrate the auto maker’s 100th anniversary last year.

These are the ones with diamond-shaped inserts plated in 24-karat gold, a high-tech metal sandwich construction, and Bentley’s iconic wings on the tips. Just 100 pairs are being handcrafted at Bomber’s factory in Biella, Italy.

Also on offer is a Diamond Edition version with six diamond accents in gloss black. Bomber is making 300 pairs of those, each set priced at $2,750.

On the first night, you get to hang out with six-time Olympic medalist and five-time World Champion Bode Miller, who also happens to be a partner and investor in Bomber Ski.

Miller, age 42, joined Bomber in 2015 after two decades of professional racing. Since then, he’s been helping develop these state-of-the-art skis which, on average, take over 30 hours to construct per pair. That, and playing the bon vivant Bomber host and ski coach.

The next morning, you and Miller will be on the slopes bright and early for a long, fast-paced day of skiing Telluride’s nearly 2,100 acres of legendary terrain with slopes designed for all abilities.

“Part of the appeal of the Bomber for Bentley Ski & Drive Experience is that it’s aimed at skiers with all levels of experience, from newcomers to experts. Everyone gets to have fun,” says Miller.

That night, we bundled-up for a snowcat ride up to an elevation of 11,966 feet and dinner at Alpino Vino, America’s highest fine-dining establishment. It was a memorable culinary affair with what Chef Nicola Peddedis describes as Alpine Italian comfort food.

Day two found us sliding behind the wheel of our Bentley Continental for a drive through the San Juan Mountains, past Ralph Lauren’s 16,000-acre Double RL Ranch, up to Red Mountain Alpine Lodge—near the town of Ouray—for lunch.

Here we could snowshoe the backcountry trails, wrangle a snowmobile, or just hang out on the wooden deck. Then Helitrax had one of its five-seat Eurocopter S350s swoop in to fly us over the jagged peaks of the San Juans and back to Telluride.

While our group headed home after this brief taster, guests of next month’s Experience will be able to hit the slopes for another morning before heading to Telluride airport.

A bird’s-eye view of Telluride.  Photo: Courtesy of Bomber Ski.

There, a squadron of Cessna jets—Cessna being another of Bomber Ski’s luxury partners—will head to Utah’s Heber Valley Airport. Bentleys will again be waiting for the quick 30-minute drive to the elegant Montage Deer Valley Resort in Park City and two more days of skiing with Bode.

Pricing for the entire experience is $28,950 per couple, or $17,950 for a single participant. As for having Bode Miller give you tips on perfecting your parallel turns on Bomber parabolics? Just priceless.