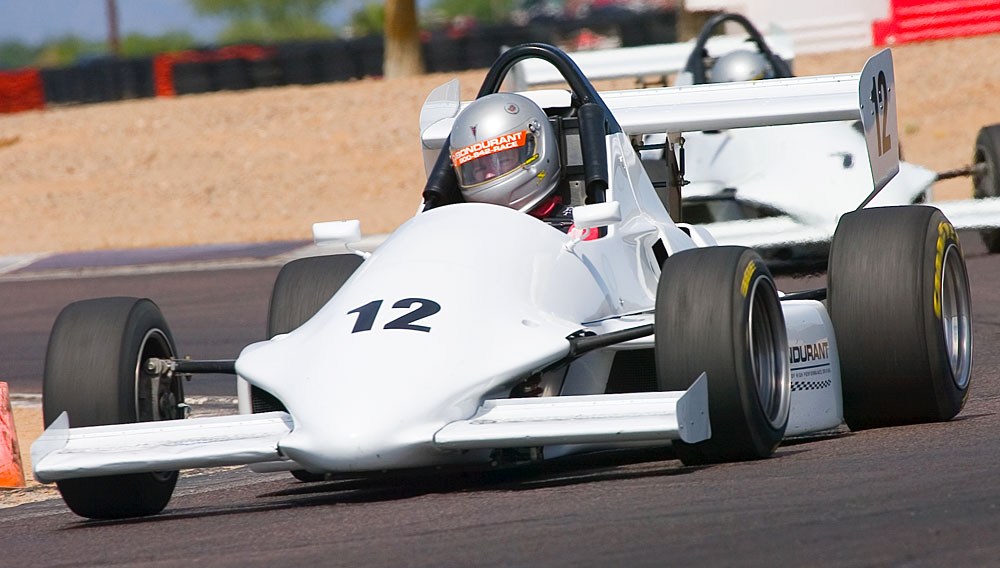 “Hang onto your breakfast,” Les Betchner, the driver/instructor, shouts as the 13-passenger Chevrolet Club approaches the first big turn on the 1.6-mile Bondurant Road Course in Phoenix, forcing a dozen formerly vertical passengers to lean right simultaneously. Equilibriums askew, our senses are immediately overwhelmed by a series of gut-wrenching sideways corners, continually screeching tires, and clouds of dust billowing up from the desert landscape. “We often see people climb out of the van after haulin’ ass around a racetrack, get down on all fours, and kiss the ground,” says Mike McGovern, chief instructor at the Bob Bondurant School of High Performance Driving. The lesson, McGovern maintains, is that “if you manage the environment, you can make any vehicle—even one as large as that van—look really, really good.”

Evidently, Bondurant’s instructors can also make a group of people who are about to spend the day driving Corvettes on the same track realize exactly how much they have to learn. After taking stock of our gastrointestinal contents, murmurs of amazement emerge from the student body. “That was a real epiphany for me,” recalls Michael Kirrene, Robb Report’s web media manager and fellow Bondurant student. Having personally participated in several accredited one- and two-day driving schools, I wanted a fresh perspective, so I brought a beginner. With no experience on a racetrack prior to the aforementioned wild ride in the shuttle van, Kirrene gamely agreed to let me gauge the learning curve of a novice driver over Bondurant’s four-day Grand Prix Road Racing program (approx. $5,000, including insurance).

The curriculum begins with the basics of car control. Students participate in a series of segments on braking, shifting, cornering, slalom handling, and accident avoidance.  “You need to slow down to learn things, and once you master them, then we pick up the pace,” McGovern says. To accelerate the learning curve, the school uses what they refer to as skid cars—Cadillac CTS sedans equipped with hydraulically actuated outboard wheels. Skid cars simulate a variety of road conditions, allowing instructors to create oversteer (wherein the rear wheels lose traction) or understeer (wherein the front wheels lose traction) events at much lower speeds than would normally be encountered on a racetrack. “It took the edge off,” Kirrene notes. “Without worrying about how fast I was going, I could concentrate on the task at hand—applying or lifting the throttle smoothly while steering—until my reactions became second nature.”

The tricky heel-and-toe downshift, for example—which allows a driver to change gears smoothly without unbalancing a car’s weight at speed—is honed several times over the first two days in Corvettes equipped with Tremec manual transmissions. “People come to the school and tell us, ‘I don’t need to learn how to heel-and-toe downshift because my car has a paddle shifter that automatically blips the throttle,’ ” McGovern says. “But you never know: One day you might want to drive a classic car that has a manual, and you’re going to need to know how [to downshift].”

That commitment to teaching the basics—really drilling them in—is what separates Bondurant from most other driving schools. Courses range from two-hour karting lessons ($250) to a daylong teen safety driving program ($495), on up to a four-day course in Executive Protection/Anti-Kidnapping ($5,950) intended for executive or military chauffeurs. “But mainly we’re geared toward Joe Public,” McGovern says. “There’s a percentage who want to give racing a try, and this is a great place to start,” he says. “Then there are professional racers who want advanced training, like the NASCAR guys who know that we will prepare them for road courses.”

On the third day, our class moves over to Firebird East Track, which we are told is a special treat normally reserved for Advanced Road Racing. It is here that we satisfy a requirement for the Sports Car Clubs of America (SCCA) license, which means twice lining up the Corvettes two by two and simulating the start of a race.

Bob Bondurant was a well-known racer whose career had no sign of slowing down. In 1965 he won the World Manufacturer’s Championship for the U.S. in a Shelby Cobra. Then, in 1967 in Watkins Glen, NY, a steering arm on his McLaren Mk II broke during practice at 150 mph, flipping the car eight times before coming to rest in a ditch. He was told he would probably never walk again. “I remember thinking, Now what’re you going to do, Bondurant?” he says. “Then Carroll Shelby called and said he wanted me to teach.” Bondurant had coached James Garner for the classic car-racing movie Grand Prix and found that instructing came easy to him. Initially, teaching other drivers helped Bondurant pass the time while he rehabilitated. “I’m a people person, and I thought maybe teaching was something I could do that was worthwhile,” Bondurant says.

Before long, Bondurant realized he could teach longer than he could race, so he started his own school. Despite being a septuagenarian, Bondurant still instructs some of the students in his advanced courses. Instructors instill braking skills early with multiple drills that train students to make full use of the brakes while steering around obstacles. “Always squeeze the brakes on—never hit the brakes,” Bondurant advises. He explains that as you roll your foot off the accelerator, a car’s weight transfers forward. “When you ease on the brakes the shocks and springs compress and the tire patches expand—so when you turn, you have more traction,” he says. “Consequently, you can go into, through, and out of the corners quicker.”

But it’s the little things that make the biggest difference. “If there are ten things to do well, and you only know eight of them, you may never win a race,” he says. Success is a matter of putting everything together. “Looking way ahead, or just a three-and-nine hand position, can make a huge difference.”

Bondurant may not actually be a spiritual guru, but when discussing driving techniques, he sounds like one. “What you really learn at my school is not to give up in life. As a driver in a race, if you give up, you’re never going to win. Life is the same way, if you think about it,” Bondurant says. “You might say, ‘I don’t know if I want to do that.’ Well, if you know you don’t want to do something, don’t do it. Go with your gut feeling. The truth is, everybody has a slightly different experience,” he says, “but the main idea is to learn, have fun, and gain a lot confidence in what you’re doing.”

Vision, Bondurant maintains, is the most important of a driver’s senses. “That’s really why open-wheel cars are always faster—you have the wheels right out in front of you, so you can see better,” he says. But whether you are on a racetrack or the street, “where you look is where you’re going to go. When I’m driving on the street, I’m always looking six to eight car lengths ahead.”

Kirrene and I headed back to Los Angeles after driving open-wheel cars all morning on the final day. Judging by our lap times, he had narrowed the gap considerably, but the true test was ahead of us. Compared to our commute to Phoenix five days earlier, I immediately noticed a remarkable difference from the passenger’s seat. On the return trip, he picked his spots in traffic more carefully, waiting for openings before accelerating around slower vehicles. His entire driving style had become noticeably smoother within just a few days.

“Before, I would look ahead, but I was always looking for something bad to happen,” Kirrene says. “Now, I’m always thinking about if the guy next to me swerves into my lane, how I’m going to get out of it with minimal fuss, without having to slam on my brakes.”

That is exactly what McGovern hoped to achieve. “Looking further down the road—what separates a good driver from an okay driver is that he really knows how to look for the path he wants the car to take, and we work really hard at making sure people do that—and do a good job at it.” (www.bondurant.com)