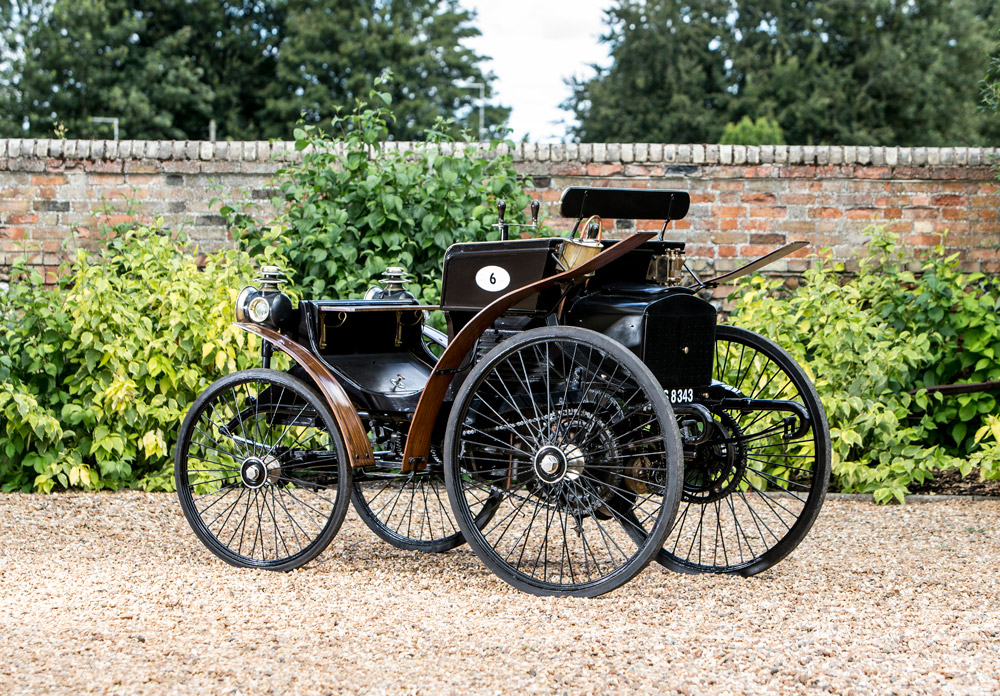 Bonhams is the only auction house that stages a dedicated sale of what the British call “veteran” cars—those that were built before 1905. The sale, on November 2, takes its name from the Bonhams London to Brighton Veteran Car Run, an annual contest for machines from that era. This year’s race will be on Sunday, November 4.

Standouts at the 2018 auction, which takes place in London on November 2, include a 1903 Darracq 24 hp Model JJ Rear-entrance Tonneau, estimated at $700,000 to $830,000, with a strong connection to the notorious 1903 Paris-Madrid race. The car’s original owner, Albert Arvengas, traveled the route as a “touriste” rather than as a competitor. When officials halted the race in Rouen after several accidents, including one that killed Renault co-founder Marcel Renault, Arvengas continued on to Madrid in his Darracq. 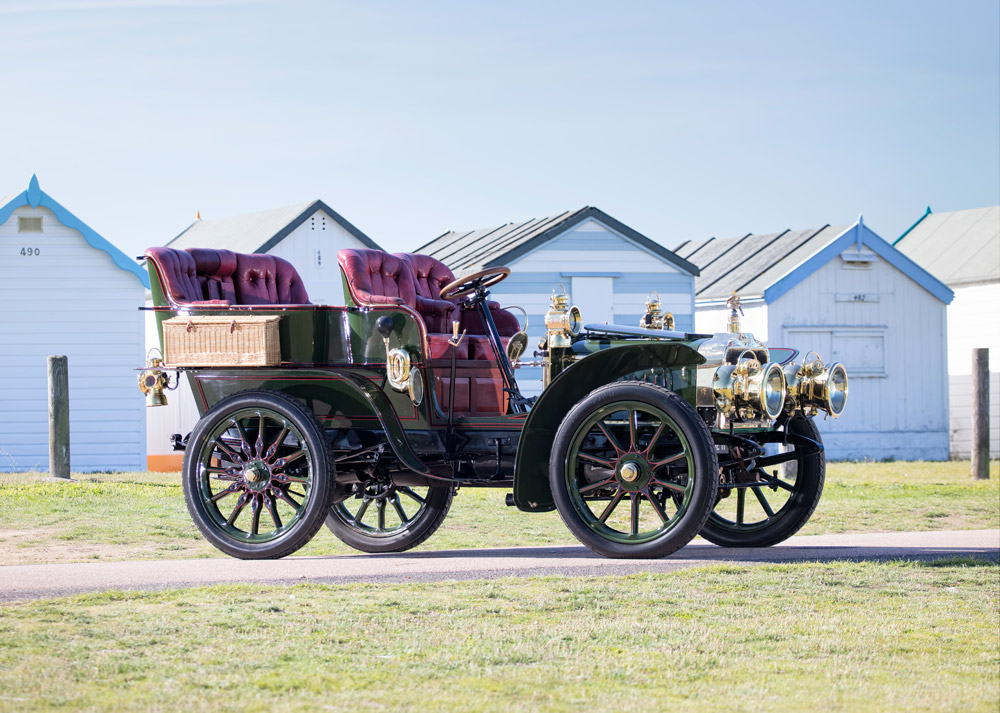 The Darracq bound for the Bonhams block.  Photo: Courtesy of Bonhams.

“It shows what an impressively robust vehicle this is,” says Malcolm Barber, co-chairman of Bonhams. “It is a comfortable four- to five-seater, and it shows that it was, and still is, a pleasure to drive over long distances.”

Also on offer is a 1902 Panhard-Levassor, estimated at $220,000 to $260,000. It comes with the welcome special option of a magneto ignition and an electric starter. “It’s easier than cranking the engine by hand to start it, which is tiring,” says Tim Schofield, head of the motor cars department at Bonhams. “It’s an easy modern upgrade to convert back to the original for purists.” 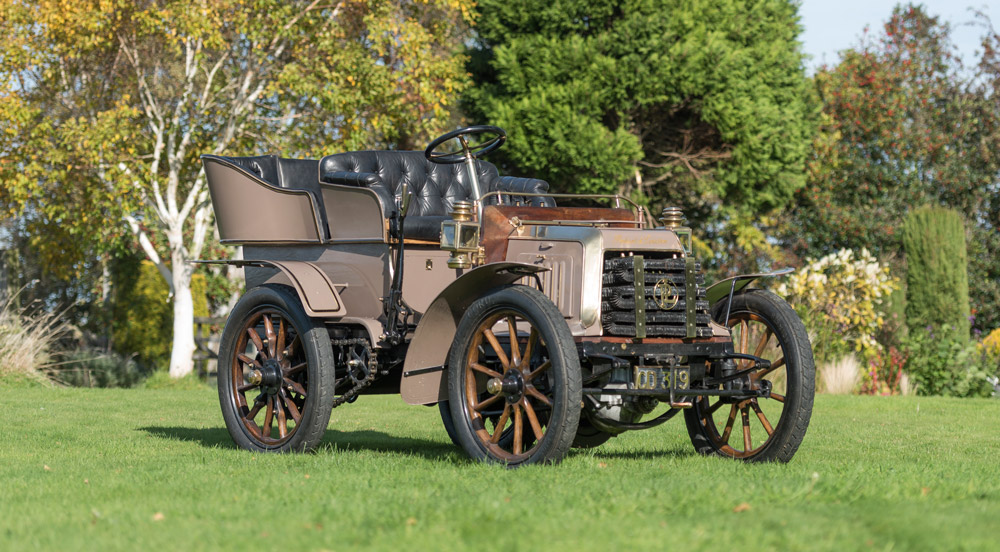 A 1902 Panhard-Levassor.  Photo: Courtesy of Bonhams.

The sale also includes a car from the 19th century: An 1894-5 Peugeot Type 5 2½ hp Twin-cylinder Two-seater, estimated at $380,000 to $510,000. Circumstantial evidence suggests it was one of five Peugeots that competed in the world’s first motor race, held in 1894. The Paris-Rouen event was so early in automotive history that its formal name included the words “horseless carriages.” “It is of exactly the same type as Peugeot were running themselves during the race, and Peugeot held on to it for a very long time despite having an enormous waiting list,” says Schofield. 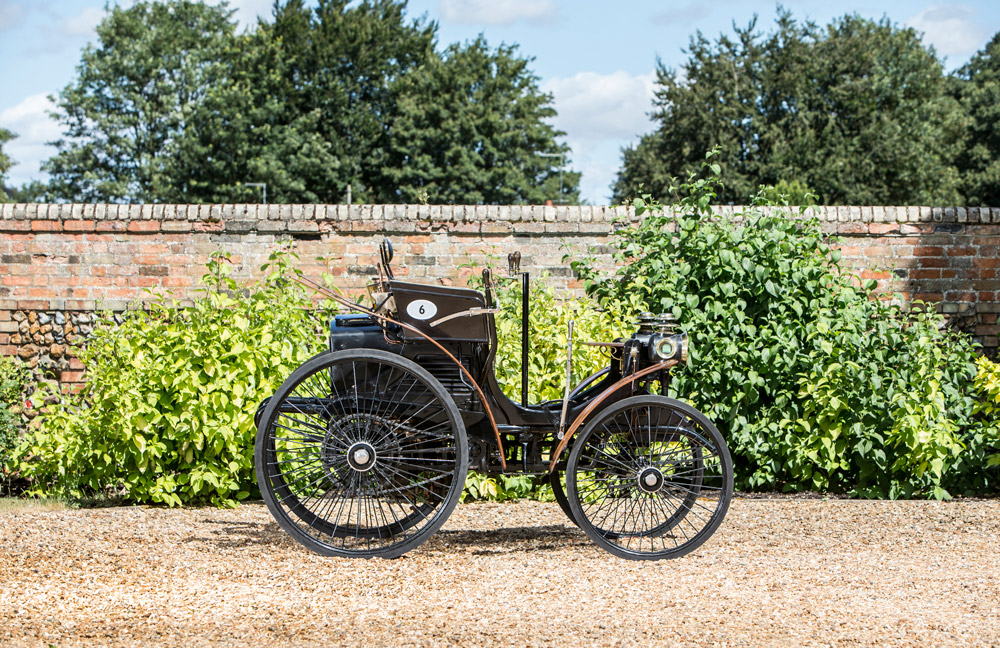 The early Peugeot presented by Bonhmas.  Photo: Courtesy of Bonhams.

The Peugeot will compete in the 2018 London to Brighton race, which Schofield says “does add a huge amount of appeal. It means that someone could easily buy a car on Friday and drive it in the run on Sunday.” But that will only guarantee the new owner a spot in the race, not a win, and maybe not a finish. “With cars of such a great age, it is always possible that there will be issues during the run,” Schofield says, “But the best thing about these cars is that they are relatively easy to fix compared to a modern car, so they often manage to reach the finish line.”