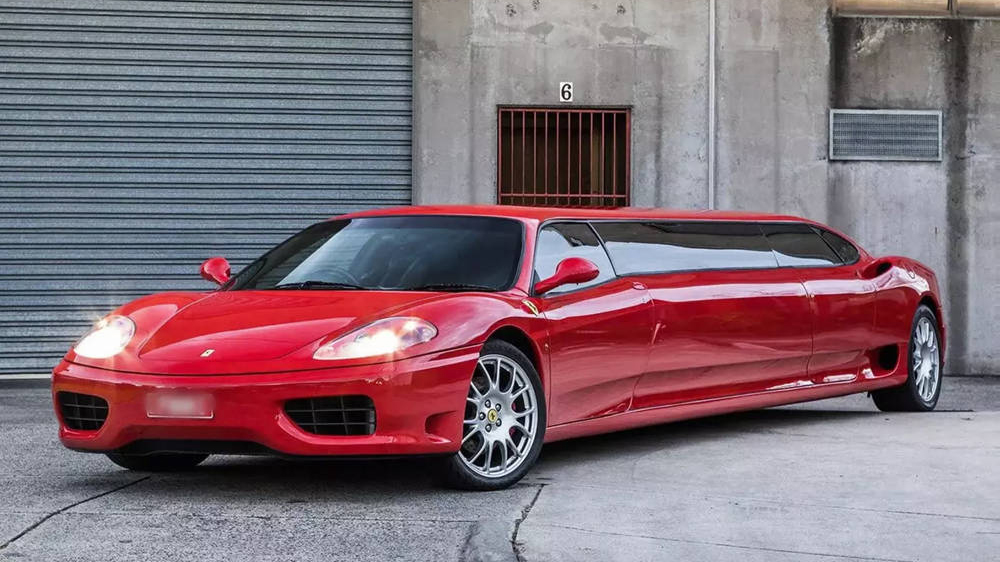 This Prancing Horse has been stretched almost beyond recognition—and that’s actually a good thing. The 2003 Ferrari 360 Modena is now a luxury limousine that’s been outfitted for partying.

The handiwork of Australian Scott Marshall, the elongated Ferrari still sports the late coupe’s curves and the marque’s trademark red hue, but has been extended in the body to offer more space. It can comfortably seat eight and is fitted with two TVs, a thunderous audio system, neon lights, and, of course, a minibar.

Marshall got his hands on the original Italian stallion after it was imported from the UK to Australia in 2012. According to an interview with Street Machine, the brave auto enthusiast promptly “cut the bastard in half” using an air hacksaw and began work on his makeshift party mobile.

To create the stretch effect, Marshall added aluminum chassis extensions, along with new fiberglass side and roof panels. He also fitted two gull-wing doors at the rear for a little extra pizzaz. While these additions were all relatively lightweight, the limo is more than 2,400 pounds heavier than the original supercar.

Inside, the spacious cabin is akin to an upscale LA club with black leather, bright LEDs, and all you need for partying (read: Champagne and music). It can seat eight revelers while the front cabin can accommodate a driver and one other.

Under the hood, the original’s 3.6-liter V8 remains and gives the stretch an impressive 400 hp of grunt. This means it could well be the quickest limo around. The manual gearbox was switched for an automatic transmission—a move that will upset purists, but please chauffeurs—and the one-off has been fitted with air-ride to improve the overall driving experience.

Aside from the whole being sliced in half thing, the car is in good condition. It’s covered just 40,000 miles since it rolled off the line in 2003. It’s currently residing Down Under and is listed on CarSales for the lengthy six-figure sum of $399,999 AUD (roughly $285,000 USD). Thankfully, it’s also available for international purchase.

It’s not the first ridiculous limousine we’ve seen. Earlier this year, Learjet converted one of its aircraft into a street-legal stretch. It probably won’t be the last, either. May we suggest a riff on our supercar of the year, the SF90 Stradale, next?