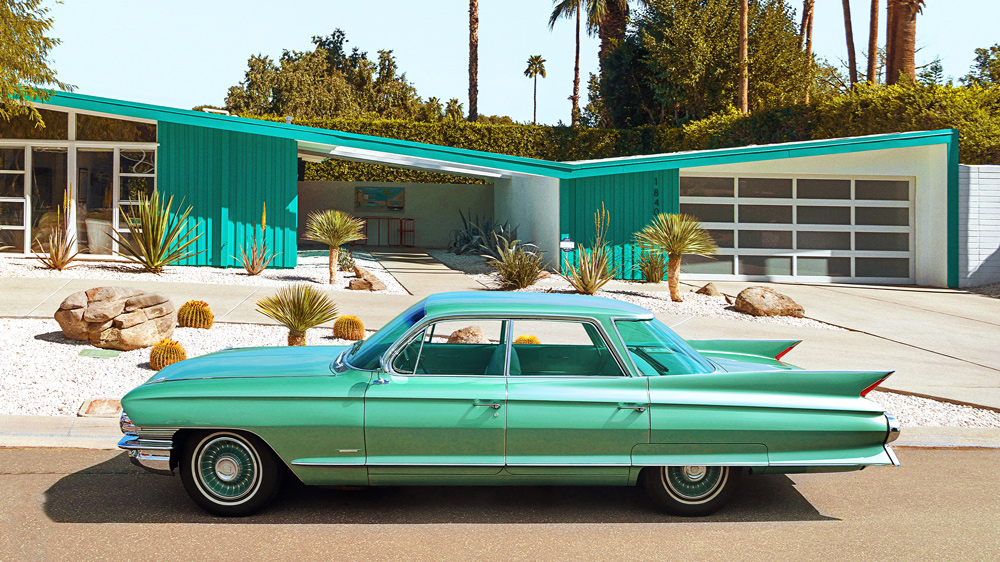 The next best thing to a garage full of cars is a library full of car books. The shelves in our garage are fairly sagging with literature dedicated to automobiles and motorcycles. It usually starts by thinking, “Hey, someday this will be useful.” Because while the internet can be a valuable resource when researching a story or looking up facts, online information doesn’t carry the clout of something that’s been committed to print. And certainly, a screen isn’t as rewarding as a book when looking at pictures of cars—daydreaming about the ones that will never pass through our metal roll-up doors.

Carchitecture: Houses with Horsepower is a book that has us daydreaming quite a bit about cars, buildings and the influence that the automobile exercised on some of the greatest architectural minds of the modern age. Co-authored by Bert Voet and Thijs Demeulemeester, designed by Thomas De Bruyene and with stunning images by a worldwide roster of photographers, this 192-page hardbound volume is from the Belgian-based Lannoo Publishers, and is available through the usual online booksellers. 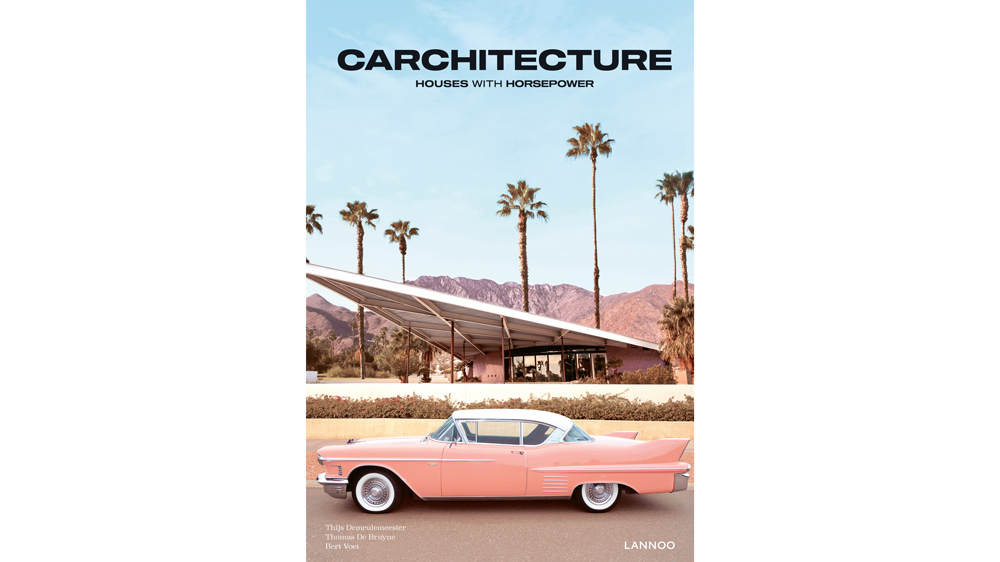 The cover of Carchitecture: Houses with Horsepower as seen in the hardbound edition.  Photo: Courtesy of Lannoo Publishers.

The publication is not just about automotive eye candy, but offers six chapters of probing observations, notable quotes and images of architecture spanning the 15th century to the present, revealing fascinating contrasts between the two disciplines of design. While Carchitecture devotes most of its pages to European automobiles and architecture, readers also glimpse some unlikely pairings, such as an Alfa Romeo 33 Stradale in an abandoned factory in China. An international world-tour, the work also takes readers to Japan, Mexico, Brazil and the United States.

Architecture in Europe was well over 1,000 years old before the first nail was hammered in the New World. In Carchitecture, Grand estates in Italy, Belgium, England and France are foils for some strange automotive bedfellows. A modern Ferrari is at home in front of Turin’s La Venaria Reale, but the surprises come from cars not ordinarily encountered. When was the last time you thought of BMW’s “Baroque Angel” from 1952? And Baroque architecture was ancient history by 1900, when Europe and America were coming to terms with a new architectural vocabulary, as well as a new-fangled machine that would soon put the horse out of business. Things were changing fast, with a cultural collision of cars and building design being inevitable. 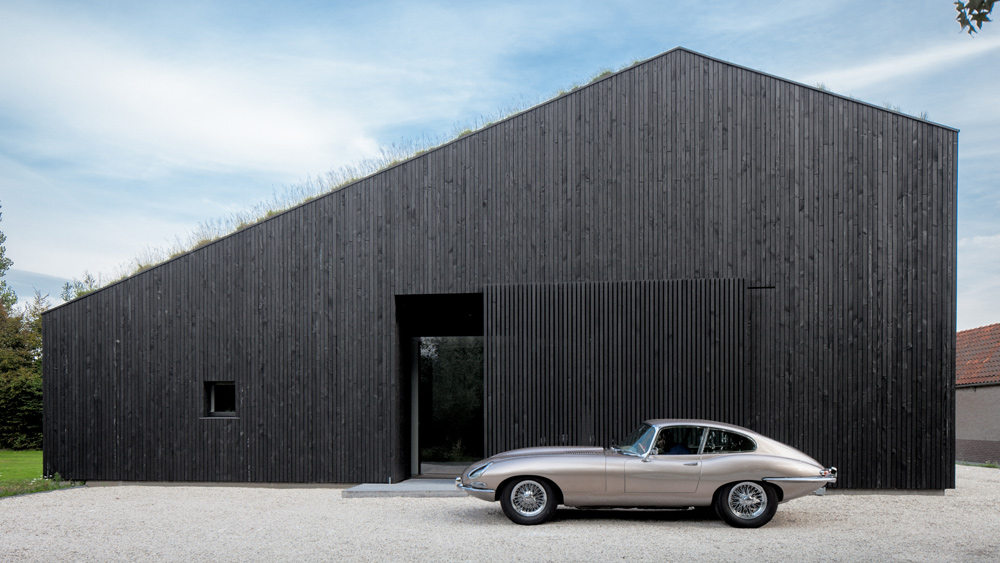 It’s worth noting that, although not in the book, the essay Ornament and Crime, written in 1910 by Viennese architect Adolf Loos challenged unnecessary embellishment in useful objects. Yet Loos called the automobile “an exemplary object that combines the virtue of economy and beauty, of utility and form.” The humorless Loos was not the only architect of import who had something to say about cars. The books’ essay on Le Corbusier—who might better have been called Le Carbusier— is especially revealing. The famous French modernist (as important as any architect of the 20th century) was obsessed with automobiles, and even worked on a car design of his own called Voiture Minimum. Seeing the automobile as a symbol of progress, he said: “If houses were built industrially, mass-produced like chassis, an aesthetic would be formed with surprising precision.” 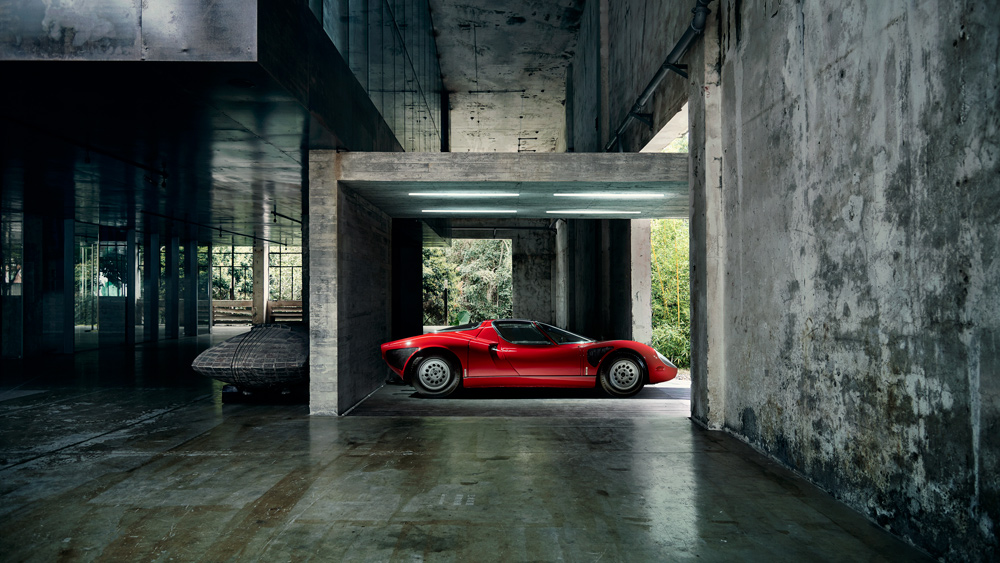 In Shenzhen, China, an example of Alfa Romeo’s seductive 33 Stradale from the 1960s sits in front of an art studio and exhibition complex designed by O-Office Architects.  Photo by Steffen Jahn, courtesy of Lannoo Publishers.

The co-existence of the building and the automobile has long posed challenges to architects. The first carport was envisioned before 1910, but it was Frank Lloyd Wright who perfected the concept. “A car is not a horse,” the dictatorial designer said. “It doesn’t need a barn.” Wright owned more than 80 vehicles and favored luxury marques like Cord and Lincoln. Despite a few aborted car-centric architectural projects, he finally received a commission in 1954 from automotive importer Max Hoffmann—“father” of the Mercedes Gullwing, Porsche Speedster and BMW 507—to design a Jaguar showroom on Park Avenue in New York City. Period images of the showroom famously show these exotics in the space, displayed on a coiled ramp that prefigured Wright’s most important architectural achievement, the Guggenheim Museum. 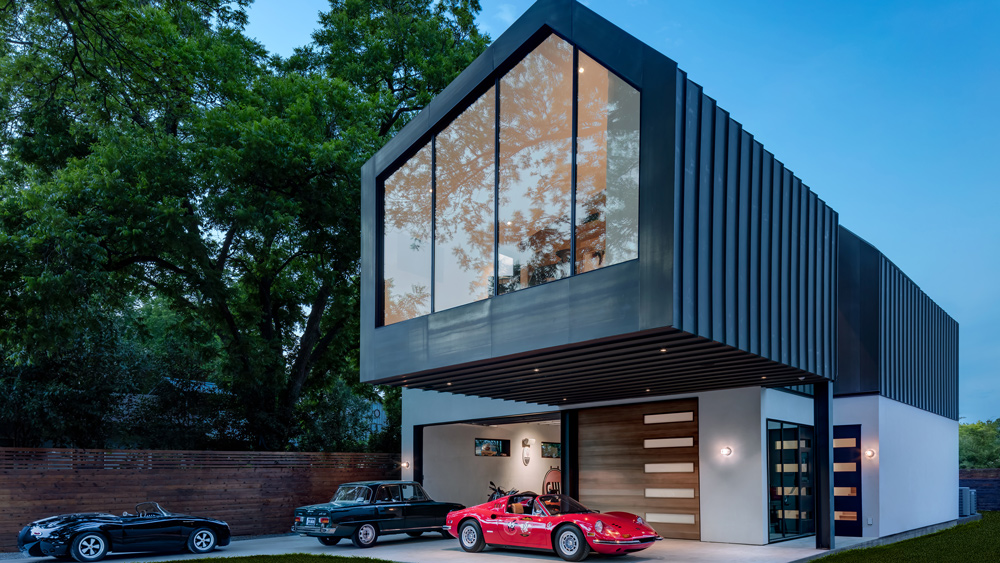 A Ferrari 246 GTS, Alfa Romeo Giulia and Porsche custom are displayed in the driveway of a small home and large garage envisioned by Texas-based Matt Fajkus Architecture.  Photo by Charles Davis Smith, courtesy of Lannoo Publishers.

The book’s chapter Brutal Power contrasts architecture in concrete, metal and stone with automobiles as diverse and unlikely as the Maserati Biturbo, Citroen SM, Land Rover Defender and Porsche 924. These thoughtful pairings give car-lovers pause to consider automobiles that are often overlooked, but which are aesthetically and conceptually significant. Of course, Carchitecture also features landmark designs like the Porsche 911 (a few of them) and important Ferrari models like the 250 GT SWB and 365 GTB/4 “Daytona.”

The book’s essay on a once-popular marque explains that in Europe—especially north of the Alps—Saab was the architect’s car, par excellence. During its day, and before the brand went into GM’s sausage grinder, there was something about the purity, purpose and practicality of a Saab that appealed to the organized mind of an architect. Its aviation roots were evident, and looking at the first Saab, a model 92 from 1947, it’s easy to imagine the tadpole-shaped car taking flight. 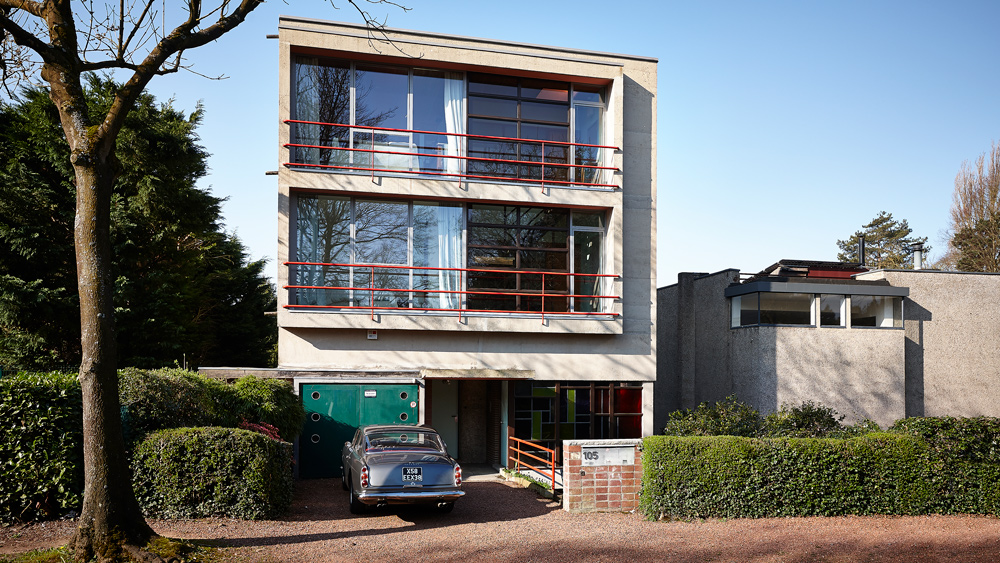 Stateside, Southern California’s Case Study houses are possibly the most influential domestic dwellings ever built, not to mention some of the most “livable.” John Entenza’s Case Study House program showcased architects like Eames, Koenig and Ellwood, and period photos by Julius Schulman and others taken in the 1950s and 1960s often feature a high-performance or luxury automobile parked under a cantilevered carport. Craig Ellwood, by the way, was a playboy who liked fast four-wheelers, and drove a Lamborghini with the license plate “Vroom.” 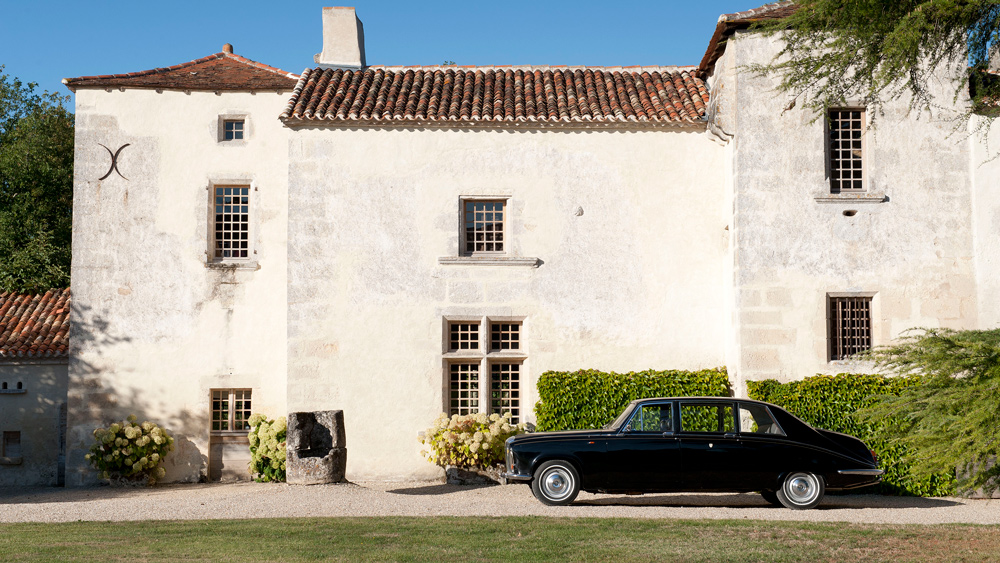 No self-respecting architecture buff will deny the seductive narrative suggested by a long-finned piece of American iron parked in front of a swank mid-century shack in Palm Springs, where architects like Frey, Neutra and Wexler left indelible legacies. It’s no secret that the Southern California desert also gave birth to an iconic automobile, when in 1961, Raymond Lowey and his team of Tom Kellogg, John Ebstein and Bob Andrews hunkered down in a Palm Springs studio for a week to design the Studebaker Avanti. 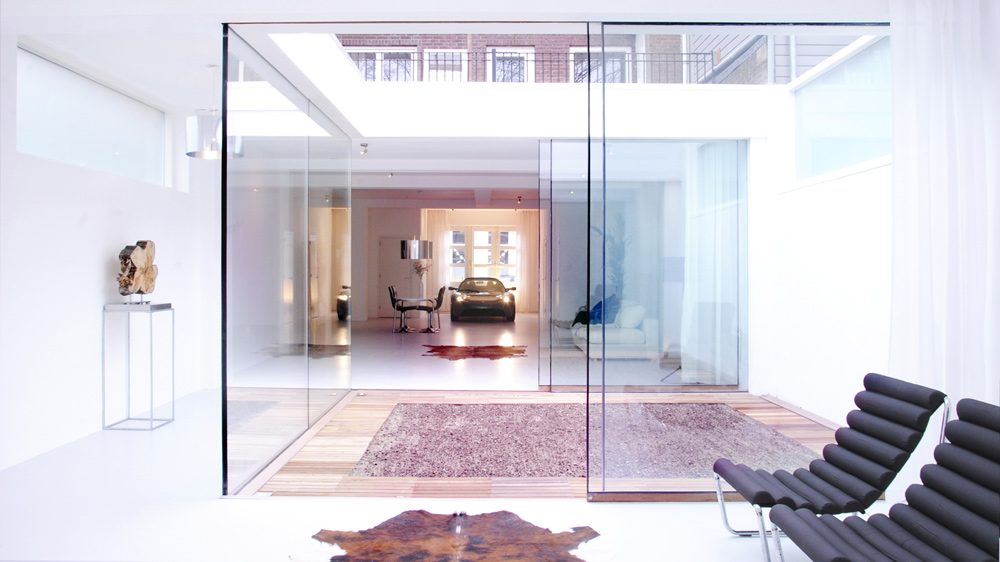 Once an old carpentry shed, this Netherlands home was transformed by Studio OxL and now houses a Tesla Roadster.  Photo by Irene van Guin, courtesy of Lannoo Publishers.

Carchitecture: Houses with Horsepower has had us thinking, not just about architecture, but about automotive makes and models that don’t ordinarily come to mind, and that’s what the best car books do. That the houses and photography are worthy of an architectural journal make this book a must-have for anyone who loves beautiful design.